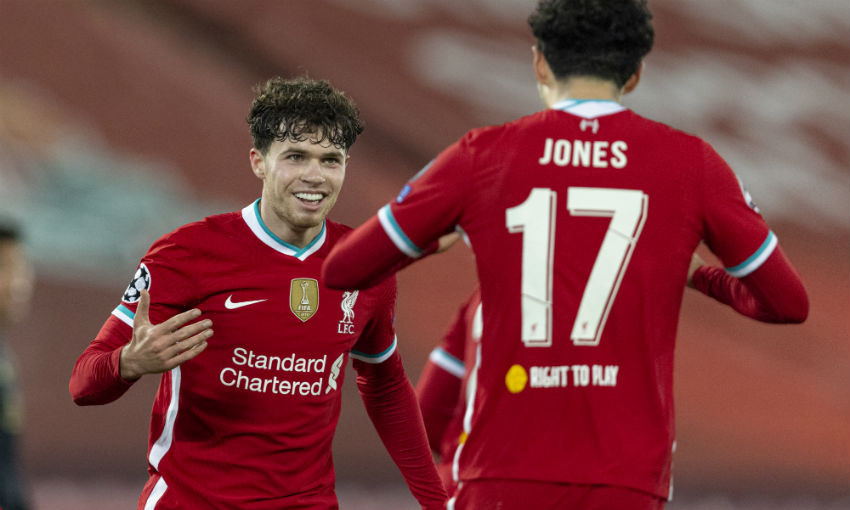 Neco Williams believes his long-time friend and Liverpool teammate Curtis Jones has taken his game to a new level this season.

Jones, who climbed the Academy ranks right through to the first team with Williams, has made 14 appearances for the Reds in all competitions so far in 2020-21.

Having netted his first Champions League goal earlier this month, Jones caught the eye once again in Sunday's draw at Fulham in the Premier League.

And the quality of these displays from the No.17 have come as no surprise to Williams.

Assist for the boy @curtisjr_10 ,1-0 win, through to the knockouts #championsleague #letsgo https://t.co/kSV9qeqIcd

"With youngsters, if you get an opportunity you need to take it and that's exactly what Curtis has done," Williams told Liverpoolfc.com. "For me, he's been outstanding for the last few games now.

"With games like this coming up, he's just going to learn and gain that experience to become a better player.

"He plays with that much confidence and that much maturity, he doesn't play like a 19-year-old, he plays like a 27-year-old. He's obviously a fantastic player.

"For what he's done this season so far, he's helped this team massively and he's only going to grow to become a better player."

Read on for the rest of our chat with Williams ahead of the Reds' meeting with Tottenham Hotspur...

Neco, an exciting night awaits at Anfield for a top-of-the-table clash...

It's obviously going to be a tough game. Spurs have had a great start to the season but with our 12th man at Anfield, it's going to push us on to do what we do best and hopefully get the win.

You mentioned you'll be backed by supporters at Anfield again, how much did the 2,000 help in the Wolves game?

Massively. They're our 12th man and what they do is motivate you to do the best you can. They get you going for games. There's nothing better walking out, even if it's 2,000 fans, with them singing and screaming. It's just a massive boost for the whole team. Even though it's only 2,000, when they were singing and screaming, it felt like a full stadium at times.

It is a contest between the league's top two teams, but this Liverpool team has proved they're very good at shutting out the noise and just focusing on the task at hand...

Exactly. There's that many games now, we can't look too forward. We have to take it game by game and obviously the game coming up is going to be a massive game and a tough battle. But with the squad we've got now and the mentality we've got, I think it's going to be a great game. All we're focusing on is getting the win and to get the three points. Hopefully we'll put on a good performance for the fans and for everyone around the world to watch and get the three points.

As a defender, you'll be aware how Spurs' quality in the final third means you can't have a lapse in concentration for a second...

Spurs have got dangerous attacking players in their side and we're aware of that. Obviously they've got some fantastic players, they've got quick players and if we stay together as a team and play our best then we'll keep them quiet. Hopefully we'll rely on our attacking forward players to get the goals and hopefully we'll get the win.

There may be the chance for you to come up against your international teammate in Gareth Bale. What's he been like to you as a teammate and what's it like to defend against him?

But you do have a fine safety net in Alisson Becker. As well as Caoimhin Kelleher did, how nice was it to have Alisson back in goal at the weekend?

Very nice. For me, he's one of the best 'keepers in the world. For him to come back against Fulham – his first game back from injury – he made some unreal saves. For Kelleher to do what he did when he stepped in was excellent, but Alisson can bring the exact same qualities and he is a top, top goalkeeper. He helps us a lot and is one of the best goalkeepers in the world.

Just how are you feeling confidence and fitness-wise? You've made appearances in six of Liverpool's last seven games...