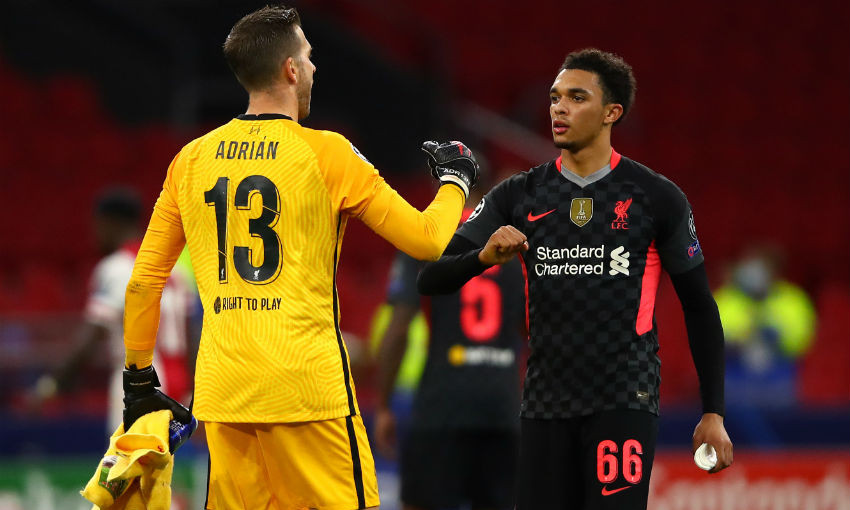 The Reds earned a 1-0 victory at Johan Cruyff Arena following an own goal from Nicolas Tagliafico and a resilient defensive display.

Sharing similar sentiments with Jürgen Klopp, Adrian expressed his delight at securing the important result after a tricky encounter with the competition's semi-finalists from 2018-19.

The Spaniard told Liverpoolfc.com post-match: "It was the best start to a new campaign of Champions League – getting the clean sheet on a difficult pitch like this one and the first three points.

"It's a big win, a massive one – three points in the Champions League and a clean sheet. It was a little bit different, strange, we missed some good players.

"I think we deserved another result in the derby but I think we reacted really well and the team showed the strong mentality that we have, a winning mentality.

"We showed [that] and we go back to Liverpool with the first three points.

Liverpool's pursuit of that shutout was preserved thanks to a sublime goalline clearance from Fabinho towards the end of the first half, denying Ajax skipper Dusan Tadic.

It was the standout moment of a Man of the Match performance from the Brazilian, who was deputising at centre-half due to the absence of Virgil van Dijk and Joel Matip.

On Fabinho's showing at the back, Adrian commented: "Fab played a few times there last season and the more games playing together, everyone is going to get more confident, for sure.

"We've known each other for a long time and it's not just the centre-backs and the goalkeeper, it's the whole team defending and it was a very good job from everyone.

"Obviously we know we are going to miss Virgil and it's a big loss for us, but it's how to react. We have many good players who can play in this position – Fabinho did great tonight with Joe.

"We have a great squad and we have shown at different times last season, when anyone is not playing, another one comes from the bench to do the same and even better.

"We are going to miss Virg, for sure, but I thought we did good tonight from the defending side."