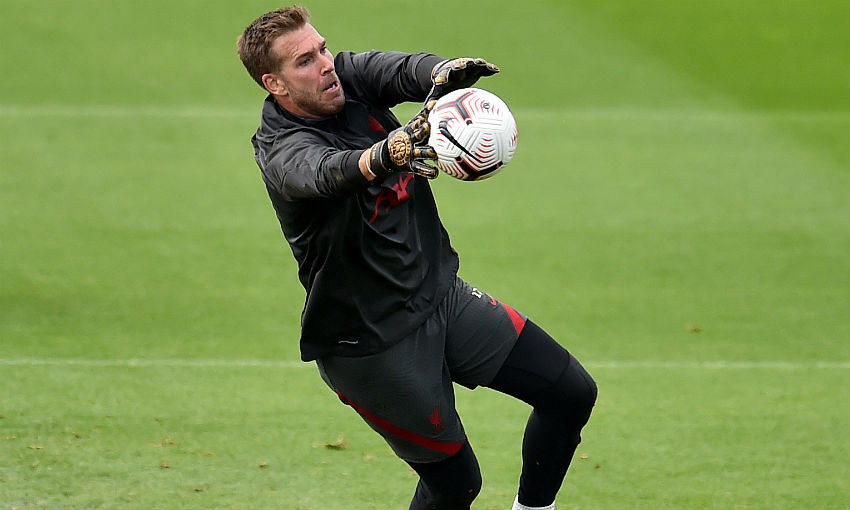 Adrian has shed light on his role in helping Thiago Alcantara settle into life at Liverpool on and off the pitch.

The duo previously spent time together when away with the Spanish national team in 2016 and are now teammates again after Thiago's unveiling as a Red last week.

The midfielder is already making a positive impression at Melwood with his talent and attitude, leaving Adrian extremely excited about what he can add to the Premier League champions.

Liverpoolfc.com sat down the goalkeeper to discuss the arrival of the No.6 and preview Thursday's Carabao Cup third-round tie away at Lincoln City.

The signing of Thiago was one fans had been waiting for so long. As players, how excited were you to see him sign last week?

Thiago is a world-class player. I knew him before when we went to the national team and because we have a few friends between us. He's a top player, he has quality, he has [a] great pass, great shot, vision of the game – a different one. So he gives us a lot of help. This season is going to be tough and he gives us that quality that he has. Obviously part of this is a great player, fits really well into the dressing room, speaks very good English, so no problem at all. I think he's going to enjoy this season, the first season with us.

It must be nice to have a fellow Spanish speaker in the ranks, too. Have you been helping him settle?

I try to help him as much as I can. Last season when I came I liked when the people helped me to settle down quick to everything – the city, the feeling of the club, the philosophy. All that you can share with him at the beginning. I have had a few good chats with him explaining obviously just good things about the club. Hopefully he's going to enjoy this season because, for sure, it's going to be tough but we're going to enjoy it with him.

You've worked with him before but had a few days training with him now, just tell us about his qualities and how impressed you are with him as a player?

He was like how I was expecting but the other players, maybe they played against him when he was at Bayern or Barcelona and they could have suffered his quality and all the stuff that Thiago is doing on the pitch. You can see that he's a different player. He uses right and left like the same leg, he has ambition like totally another person from another planet. You can see him doing passes that nobody sees and shooting with that quality, with that spin he has in both legs. Also he's a hard worker – playing in midfield for us is going to help him. For sure, everyone is trying to help him to adapt as quick as possible to our system, to the movement of the players on the pitch but he's clever enough to adapt to play quick. You can see him now around Melwood like this is the new home of him – the first one coming in, leaving as the last one.

He also seems to have that winning mentality that is really important to the manager...

For sure. He's a winner. You see his career, he won a lot of titles because obviously he was in a top team like Barcelona and Bayern Munich. He likes to win, he came here to win, to try to win all the titles we are facing this season. It's going to be intense, it's going to be a period with many games. It's a great signing for us and I think he's going to help us a lot.

Diogo Jota is also another new arrival, how has he been settling in this week?

Very well as well. He trained a few days with us. I think he's also a great signing. We need people with that pace, with that quality that Jota has. He showed last season with Wolves that he can score, he can pass, he can dribble, he can do many things and obviously he's a hard worker as well. I think he's going to adapt quick to the team. We hope [he has] some opportunity to play in the next few games and show the quality that he has as well.

Talking about the Carabao Cup then, it's not going to be an easy game against Lincoln at all, is it?

You never have an easy game. They're going to play like it's the last game of their lives, for sure. It's the game of the season for them. Imagine Liverpool is coming to your stadium – empty stadium, but it's your stadium – you want to defend there. Obviously they're going to show that desire to win. But I think we have to at least match that desire and then show our quality that we have. For sure we're going to have options for different players to play, fresh legs from Sunday and we know we also play on Monday and then Sunday again. For sure the manager is going to change some players. Every time a player wears the Liverpool FC shirt, [you] have to [give] 100 per cent, everything. We know our job. So that's what we're going to do on Thursday, for sure.

The team have earned four trophies in the last 16 months, but how nice would it be to add this one to the cabinet as well?

It's one more competition, it's a different title that we could win. We are here to win as [many] games as possible. Everyone is looking to face that new challenge that we have in the Carabao Cup. It's a new game that we have to face with a smile on the face and give everything.