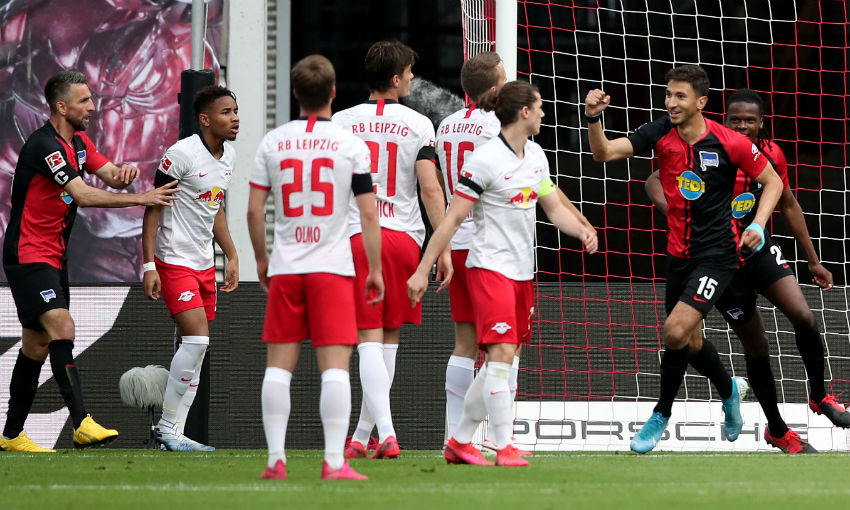 Marko Grujic is becoming accustomed to playing behind closed doors as he prepares for Hertha BSC’s fourth game following the resumption of the Bundesliga.

The Liverpool midfielder has started and finished each of his loan club’s three matches since the German season restarted earlier this month.

A smart, volleyed finish from Grujic helped Hertha claim a 2-2 draw at RB Leipzig in midweek – a result that followed convincing victories over Hoffenheim and Union Berlin for Bruno Labbadia’s team.

In-form Hertha’s next assignment sees them host Augsburg on Saturday and, ahead of that fixture, Liverpoolfc.com caught up with Grujic to discuss the adaptation to a new way of working, his aims for the rest of the campaign, his hopes for Liverpool and more…

Marko, you have taken seven points from three games since the Bundesliga resumed – everyone at Hertha must be pleased with that?

Yes. Actually we changed the coach during the situation with coronavirus and have worked really hard with him. It’s been, I think, four weeks, since he came, so we worked hard which we could see on the pitch. Two games have been decided in the second half and against Leipzig we scored an equaliser in the last minute and we had another chance to maybe win the game, so that’s the proof of our work. It’s nice to be back. We won seven points from a possible nine so for us it’s a good start. Everybody is satisfied.

You mentioned the new coach, Bruno Labbadia, there. It sounds like you are enjoying playing for him – has much changed in terms of training and tactics?

Yes. I would say he is quite experienced in the Bundesliga, he has coached three or four clubs in the league so he knows a lot about the opponents and he used to play for Bayern Munich, so he’s a big name here in Germany. He has a lot of qualities and we found each other with other players. So far everybody is happy working under him and we are looking forward to the next games.

The meeting with Augsburg on Saturday will be your fourth game in two weeks. You’ve played the full 90 minutes in each of the last three matches, how are you feeling fitness-wise?

We all worked hard and we tried to stay as fit as we can during the pandemic and then we had an extra three or four weeks to prepare our bodies and fitness shape. So far I’ve played every minute of the three games and I’m happy that the new trainer has faith in me. It’s another positive that I can take and it will push me to work even harder in the next weeks and I will try to be even better in these last six games so we finish the season properly and then we will see what’s going to be the situation for next season.

Are you back at 100 per cent in terms of fitness and rhythm?

Yes, we feel fitness-wise good. Of course there was midweek games this week so sometimes the body doesn’t feel 100 per cent but that’s normal. There are six games left and we feel as a club we could qualify for maybe the Europa League and we have a chance, if we win the three points [on Saturday], to push a bit further up the table. We are ready fitness-wise to go and then we have a little break of one week so we are going to use it.

Talk us through your goal against Leipzig. Was that corner routine planned?

We have worked on set-pieces and we had some combinations for the corners but then of course it’s possible that it doesn’t work out, but on Wednesday luckily for us the first one was the one when we scored. I was ready and luckily I shot it straight in the corner where I wanted – sometimes that’s not the same either! But we worked hard on set-pieces and we had some other chances. We already scored two in these three games so it’s again proof that we did good work on the pitch.

It’s a bit strange when you play without fans. That’s another thing, it feels kind of like a friendly game or a pre-season game, but it’s still far better than the situation like it was when we were just sitting at home doing exercises.

Are you used to it now, though, after three games?

Yes. The first one was of course the strangest, but then you get used to it. You can hear everything on the pitch, other coaches, other players, so it’s a bit weird. There is no energy from the fans after a good trick or a good pass or something, but it’s like that. It will be some time before things come back to normal so we have to adapt. We must adapt.

Liverpool resumed contact training at Melwood on Thursday. From your experience, will it take the players a bit of time to get used to that again?

I don’t know exactly what the guys are doing but it’ll be a bit strange when they start tackling each other again and have contact between each other. But of course the boys are on the top level, so they will need maybe just a few days – or not even that – to come back to their shape.

Have you been keeping in touch with people here at LFC recently?

I have mainly been in touch with Julian [Ward, loan partnerships and football partnerships manager] and he has talked to me all the time about training, about exercises that we did at home and now we always speak before and after the game on if we have to improve something. Of course that means a lot – I am still a Liverpool player and I want to be, one day, a regular Liverpool player. For me it’s still a dream to play for the club so we keep in touch.

And finally, are you looking forward to hopefully seeing Liverpool back in action soon?

Of course. The guys have been unbelievable so far this season and they really deserve it [to win the Premier League]. Of course the fans have been waiting for this for so long so it would be special for the guys. Hopefully, soon we will see Hendo lifting the trophy.