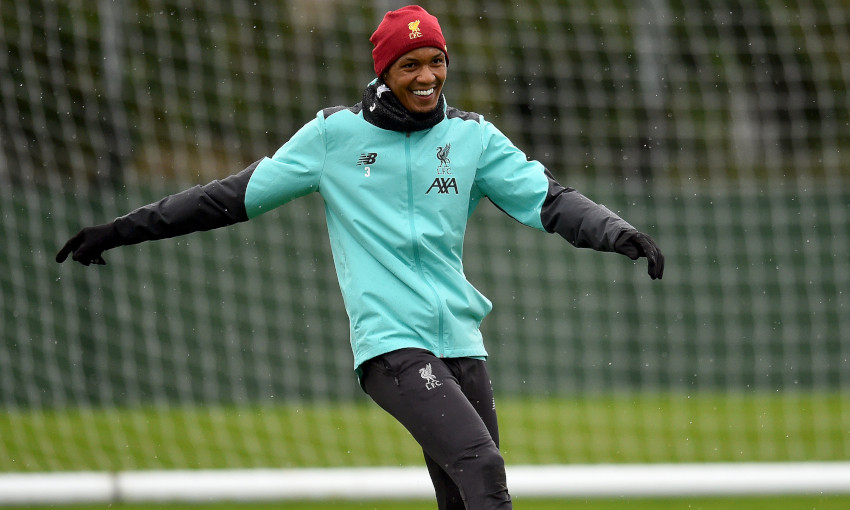 Liverpool may boast a near-flawless record after 27 games of the Premier League season so far, but Fabinho has revealed there’s a collective belief within the dressing room that they can perform even better in the campaign’s final straight.

The Reds hold a 22-point lead at the summit with 11 fixtures remaining – and they equalled the top-flight record of 18 consecutive victories against West Ham United on Monday.

The schedule continues with a trip to Watford this evening; however, during an in-depth pre-match chat at Melwood, Fabinho explained why there is a conviction within the squad of being able to improve even further, despite such jaw-dropping numbers being placed on the board.

The No.3 also detailed how Virgil van Dijk’s social media message of ‘taking nothing for granted’ was a sentiment shared with his teammates and the reasons he expects Watford to prove stern opponents at Vicarage Road.

Read on for our conversation with Fabinho…

Fabinho, firstly, the team are closing in on achieving their main goal in the Premier League, but all the talk is of taking it game by game. How do you ensure that happens as a squad?

That is genuinely what we think. When we say ‘we’re only thinking about the next game’, we’re not lying. I think in the last game against West Ham, we equalled Manchester City’s record of consecutive victories, but a lot of the players weren’t aware of it until after the game when we found out this information. It’s a great achievement, but we’re a very ambitious team and know there is room for improvement. We know we won the last game with a great turnaround, but there were things that could have been avoided, things that could have been done better. I think that’s normal for a team that has this desire to improve, that maintains very high standards. Even after we win, we reflect on what could have been done better and we think no further ahead than the next game.

Is it difficult with all the external talk, or do you find it easy given it’s a mindset the entire squad have adopted?

It’s not difficult because we know what our goal is. We know that we have a very good collective mentality and whether we’re close to winning the title or not, we continue working as hard as we did when it was the first game of the season. It’s a great moment for us, we’ve got a great opportunity, but we’re quite relaxed about it.

You have title-winning experience from your time at Monaco, as well as being involved in last year’s race here. Does that help you personally?

Yes, I believe it does. The experience of winning the French championship was important. It’s a different championship from the English one, but it’s an important title, especially as that season we weren’t the favourites but we managed to win it. I think last season helped me a lot, too, considering the campaign we had; I got to grips with the reality of the Premier League and appreciated how difficult it is. You have to play at a very high level for the whole season if you hope to win the league. So, yes, I think it helped me a lot; it helped me improve and know what’s required to win the league.

Virgil said on social media after the West Ham game “don’t take anything for granted” – is that a sentiment you’d agree with?

Watford are next up and they showed at Anfield back in December just what a difficult team they are, didn’t they?

I remember the game well: I was in the stands watching and the opponents had more opportunities than is usual against us, especially when we’re playing at home. We got an important win in that game, but we know if we were to give them the same amount of chances again the result might be different. We’ve had a good amount of time to prepare for this game and to recover from a tough one against West Ham. We know we’ll need to make improvements from the game against Watford in the first half of the season.

The manager said this week ‘everyone is fighting for everything’ at this stage of the season, so despite the differences in league positions, this is going to be tough…

Yes, without a doubt. We played against Norwich a couple of games ago, we were top of the table and they were bottom, but even with this distance between us in the table, on the pitch it wasn’t that big of a difference. I think we played better on the night, but they were a very dangerous opponent who had their chances in the game. This is a very strong championship, you can’t take any opponent lightly because every team can hurt you.

Great one from this group yesterday. Let's keep working together! #YNWA

Given we’re still unbeaten and clear at the top, does that pose a different challenge? I suppose every team wants to be the one to beat us…

I think every opponent wants to beat Liverpool; we’ve done a great job up until now, still unbeaten in the league, but as the manager said all the teams are fighting for something. Watford are fighting to get out of the relegation places, other clubs are fighting to get into Europe and in our case, we’re fighting to win the league. All games are difficult, but with this added touch of necessity and emotion, we’ll be facing some really difficult games coming up. We’ll need to give our everything to continue the good work we’ve been doing until now.

Can you identify why the team have maintained such a staggering level of consistency, not just this season in fact…

I think what the coaching staff demand of us, together with the ambition of the players and the desire to win and try to make history by becoming the first Liverpool team to win the league in the Premier League format. I think it’s a bit of everything and it’s not just work from this season, it comes from the previous seasons. We were very consistent last season, we only lost once in the league, and the mindset has continued to be the same – the desire to work hard, playing to win. As I’ve said before, even after winning we’re quite hard on ourselves, identifying areas where we could have been better and we’re not blinded by the result, we don’t become complacent. These are the facts that explain this team’s success.