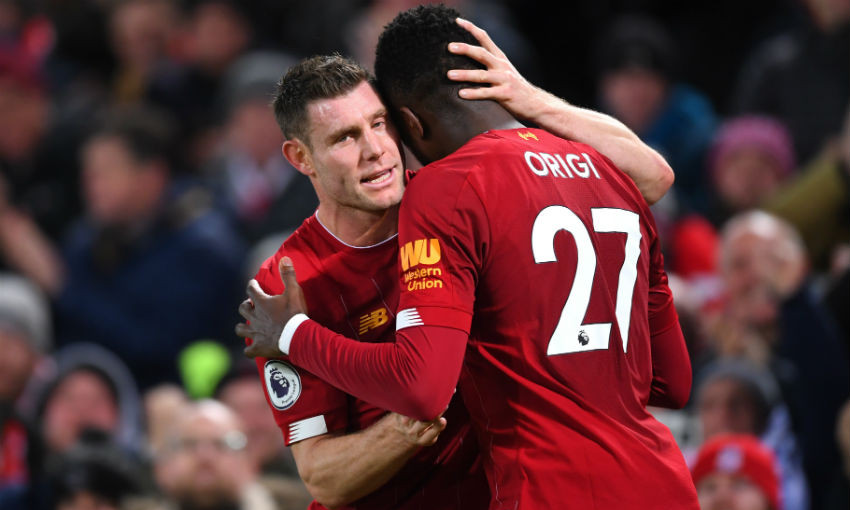 The unbeaten Premier League leaders made it 43 points from a possible 45 this season by overcoming Everton 5-2 at Anfield on Wednesday.

Klopp made five changes to his starting line-up for the game, with the boss explaining both pre- and post-match that his decision was based upon a ‘need for fresh legs’.

Two of the players brought in, Divock Origi and Xherdan Shaqiri, duly marked impressive returns with goals - the former’s brace sandwiching the latter’s finish in the first half.

And Milner believes the victory was a product of the impeccable attitude and application showcased on a daily basis at Melwood.

“The boys who came in did really well. Shaq obviously started the season with an injury and comes in and plays like that, which shows his quality,” the vice-captain told Liverpoolfc.com.

“That’s pleasing and shows how hard the boys are training as well. Anybody who’s come in at any point this season is ready for that challenge and ready for the tempo we want to play at, so that’s credit to the full squad and shows why we’re so strong.

“I think that’s why everyone is at Liverpool, they’re all top players who are really hungry to play games and win trophies and push each other hard.

“Everyone who’s stepped in is ready and that shows how hard we’re training behind the scenes. People don’t see that but the players who aren’t playing every single game, they’re pushing the boys and are ready.

“It’s good for the manager to be able to change the team, especially at the moment [because] we know how many games we’re going to have. Hopefully we don’t pick up too many injuries and suspensions but they happen and you need to be ready to deal with that.

“It’s a good sign that we’ve managed to do that, play like that, rest a few of the other guys. It shows that everyone is pushing for a spot in the team.”

The win over the Blues brought about a new club record, too, as Klopp’s side have now gone 32 top-flight matches without defeat.

Liverpool’s advantage at the top of the Premier League remains at eight points ahead of Saturday’s trip to Bournemouth.

Milner continued: “We know how many points we got last year and it wasn’t good enough.

“We’re just taking it a game at a time and trying to get those three points on the board and that’s a big strength in this squad - we only focus on the game in front of us no matter what competition it’s in. It’s a tough time of the year fixtures-wise but we recover and we go again.”