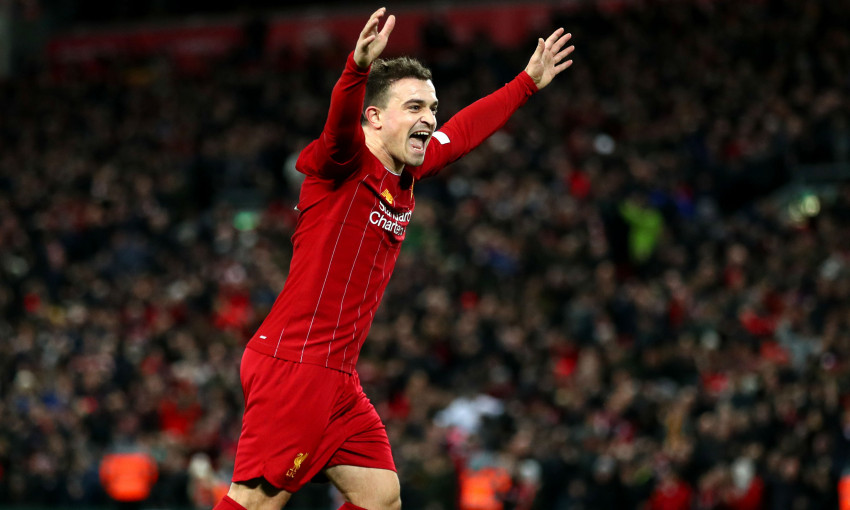 Xherdan Shaqiri was satisfied to see all his hard work at Melwood pay off after putting in an eye-catching display against Everton on Wednesday night.

The No.23 found the back of the net in the 5-2 victory in what was his first start of the 2019-20 campaign, having spent a considerable part on the sidelines with a calf injury.

And to be back contributing again in Jürgen Klopp's side provided Shaqiri with some memorable emotions during and after the game.

He told Liverpoolfc.com: "I think you saw [how much I enjoyed it] on the pitch.

"It was unbelievable to be back on the pitch, I was very happy when I knew I'd play. I wanted to have a good performance.

"Obviously I was injured and I worked hard to come back. I was very happy when I knew I'd play.

"It was not simple to come straight back in the derby but I'm always confident and try to make a good performance and help my team. It was a really good day for us."

Shaqiri calmly slotted home in the 17th minute to put Liverpool 2-0 up in a frantic first half that ended 4-2, with Divock Origi (two) and Sadio Mane also on the scoresheet.

Georginio Wijnaldum then wrapped up the three points with his strike in the closing stages of the affair as the Reds maintained their eight-point lead at the top of the Premier League.

"[The first half] was unbelievable," Shaqiri continued. "We obviously changed formation a little bit and some players played who didn't play a lot for a few weeks.

"We did very well. It's big credit for the team; you can see how good we are. We started very well, of course it was a little bit dramatic and we have to learn from our little mistakes, but that's football.

"It's a busy period now and we have to go on and win games, that's the most important thing in football. It was a good night for us Reds."

The result over the Toffees also saw Klopp's side set a new club record with their 32nd consecutive league game unbeaten.

On that feat, Shaqiri stated: "It's unbelievable. It's a result of hard work every day.

"You can see we have talent and hard work. We train very hard every day and you can see on the pitch we play with a lot of intensity.

"At the end of the day, you have to win games and we are in a very, very good way. We have a top team. I hope we can stay like this until the end of the season.

"We played for the second year with the same team. We train every day together and we have a lot of fun together in training. And you could see that on the pitch - how we play together is unbelievable."