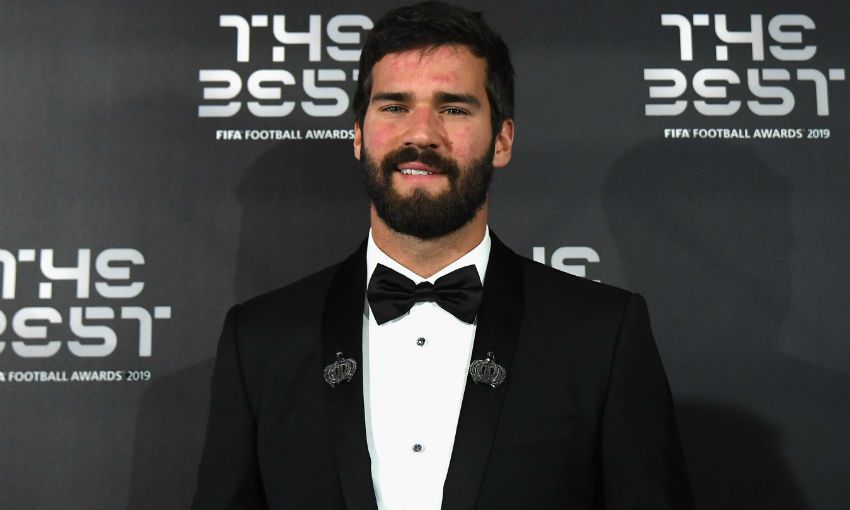 Alisson Becker paid tribute to the people around him both personally and professionally after being named the Best FIFA Men’s Goalkeeper for 2019.

Liverpool’s No.1 was presented with the award in Milan on Monday night in recognition of his stellar 2018-19 season for club and country.

After playing a key role in the Reds’ Champions League triumph, Alisson was then a cornerstone of the Brazil team that won the Copa America on home soil.

However, the 26-year-old insisted that individual accolades are only possible with the help of his family and workmates.

“Well, like I always said, for me the most important thing is to achieve my goals that are the same of the team: winning something for the club, winning something together. And then if you win some awards individually then it’s OK if you win always together,” Alisson told Liverpoolfc.com, when asked what the Best Men’s Goalkeeper prize means to him.

“I’m really happy because I worked a lot to arrive here, to win the Champions League, to become a great player, to have a great season as I had in the last one with Liverpool and with the national team also.

“So yeah, I’m very happy because always I just feel grateful for my family - they help me a lot in all the moments, good moments, bad moments. They are together with me so I’m really happy for that.”

Alisson was joined at the ceremony in Italy by Jürgen Klopp, who was crowned Best FIFA Men's Coach, and Virgil van Dijk, who finished second to Lionel Messi in the running for the Best FIFA Men's Player award while joining his teammate in the FIFA FIFPro Men's World11.

So, are their individual honours illustrative of the collective success enjoyed by Liverpool over the past 12 months?

“Yeah, for sure,” Alisson stated.

“Each one of the three, it was fair that they were there, they [Messi and Ronaldo] are playing in the top level for a long time [and] Virg made an unbelievable season.

“So yeah, I need to thank my teammates [and] also the people who work with me: all the staff here at Liverpool, the goalkeeper coaches Johnny and Jack, the other goalkeepers who are on my side. They help me a lot in pushing me forward and I think it’s really good.”