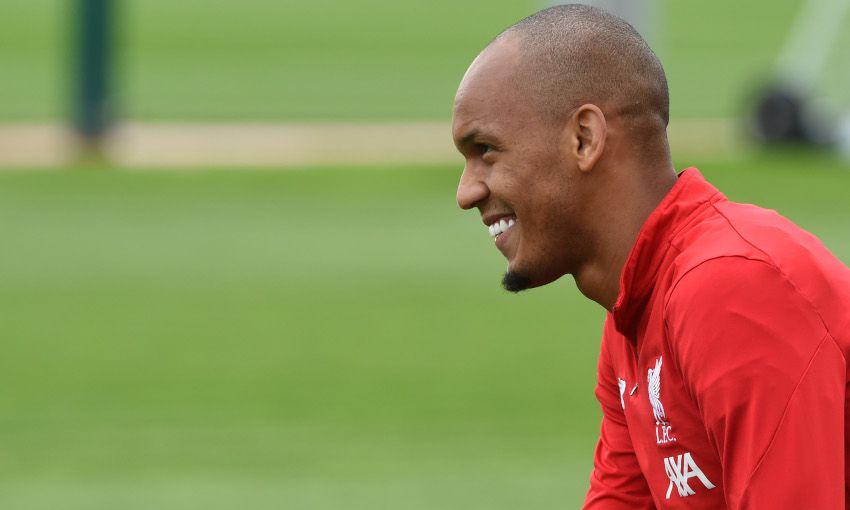 If the adage that most communication is nonverbal rings true, Fabinho’s facial reaction to the question speaks volumes.

The midfielder’s eyes narrow, his face contorts and he tilts his head back before breaking into a sheepish smile.

He has been informed that his form has had some pundits describing him as the Premier League’s current finest No.6.

And we can decipher that it’s not something Fabinho has given any consideration to.

“I think that’s related to the team, this excellent moment the team is having,” he tells Liverpoolfc.com during a chat at Melwood, eager to move away from individual praise.

“This team really helps for the individual qualities of the players to stand out. I am very flattered by the praise, but I hope to continue showing even more.

“I play for Liverpool, I want to be important to this team and I want to continue with this momentum.”

Despite his modesty, Fabinho’s standing within the Liverpool squad is widely recognised and appreciated.

‘A very smart footballer and, of course, really skilled in all defensive things,’ was Jürgen Klopp’s latest appraisal of his No.3 during his Friday morning media briefing at Melwood.

It was just 48 hours after defeat in the 2018 Champions League final that the Reds moved to secure Fabinho’s services in a transfer from AS Monaco; however, like so many of his teammates signed under Klopp’s tenure, his integration was a gradual one.

A first Premier League start didn’t arrive until October 27, but he has rarely looked back since. Indeed, should he figure at Chelsea this weekend, it’ll be his 50th appearance for the club in all competitions.

“Definitely I am different,” he says, when asked if he’s changed since walking through the doors at Melwood for the first time. “Liverpool has brought me up to the highest level of my career. I can win titles with Liverpool that I have always dreamed of.

“We are a winning team and a great team to play for with the players and coaching team we have. Everything around Liverpool, the competition for places, is really good and pushes us on to be even better. Bringing all of that together has made me a better player, definitely.”

Liverpool are currently on a club-record run of 14 straight victories in the Premier League, a sequence carried over from their exceptional performance in 2018-19.

“I know these are numbers, but they are very important numbers for us,” Fabinho notes. “It shows how consistent our team is and that’s really important for a side like ours which looks to do important things in the Premier League. I hope we continue like this like we did last season and that we get even better this season.

“Our last season in the Premier League was excellent, exceptional, and we’ve continued with this momentum. Our achievements from last season have given us more confidence to try to do even better this season. We need to continue with this dynamic and continue playing our football. Our team is strong but we need to show that.”

Liverpool will journey to London on Sunday on the back of a defeat, however.

Napoli’s 2-0 success at Stadio San Paolo on Tuesday night in the Champions League Group E opener was just the Reds’ fourth loss after 90 minutes of the calendar year.

So, what kind of reaction is Fabinho anticipating from Klopp’s charges?

He replied: “I think the momentum of the team has been very important up until now. Each victory increases our confidence and spurs us on to play even better. I don’t think the defeat at Napoli will make us lose our momentum, we will continue trying to play well and be focused on our objectives.

“We lost the game on Tuesday, but I don’t think we played badly. We did what we’d been doing in the Premier League, so we need to keep up this momentum. We’ve had a great start in the league and need to keep winning. We’re playing in the same style and doing what we’re used to.”

There are no illusions within the Melwood dressing room as to how tough an opponent Chelsea will prove on Sunday, not least given the hard-fought clash between the teams in the UEFA Super Cup final in Istanbul last month is still fresh in the memory.

“It’s been a different start to the season for Chelsea because they’ve lost some world-class players in Eden Hazard and David Luiz,” remarks Fabinho. “When a team loses important players, it sometimes takes time to find an ideal replacement, it takes some time for the team to find a new style to play because the players who left were so important.

“But they are a team with a lot of quality that is playing in the same style. We had a very difficult game against them in the Super Cup, so we know it’ll be even tougher in London.”

Results in the Premier League last weekend mean Liverpool hold a five-point lead at the summit of the division after five matches.

Nevertheless, the cushion isn’t being considered by Fabinho and his teammates.

“The only thing we’re thinking is to continue this winning run,” he asserts. “It is only the start of the season and there is a long way to go but it was really important to win the first five.

“We’ve had some really difficult games, so it’s important to keep up our momentum and continue with the great moment the team are in. We need to do everything to try to keep up this winning streak.”

If Liverpool are to extend their victorious sequence, few would bet against Fabinho playing an instrumental part in it.

Life off the pitch is one of the defining factors in assisting the 25-year-old’s transition on Merseyside, with his wife – Rebeca – recently admitting they feel like they’d ‘lived in Liverpool all of our lives’.

“Yes, that’s true,” Fabinho smiles once more, this time with warmth. “Liverpool has this family element that makes us feel so at ease… despite the weather being a bit different to what we’re used to! It is a place we really like living in.

“In fact, when we went on holiday, I said to her: ‘I am missing Liverpool already!’ With everything involved, being at a wonderful club as well, we really like Liverpool.”

Fabinho interview | Centre-back duties, 100 LFC games and a visit to The Cavern