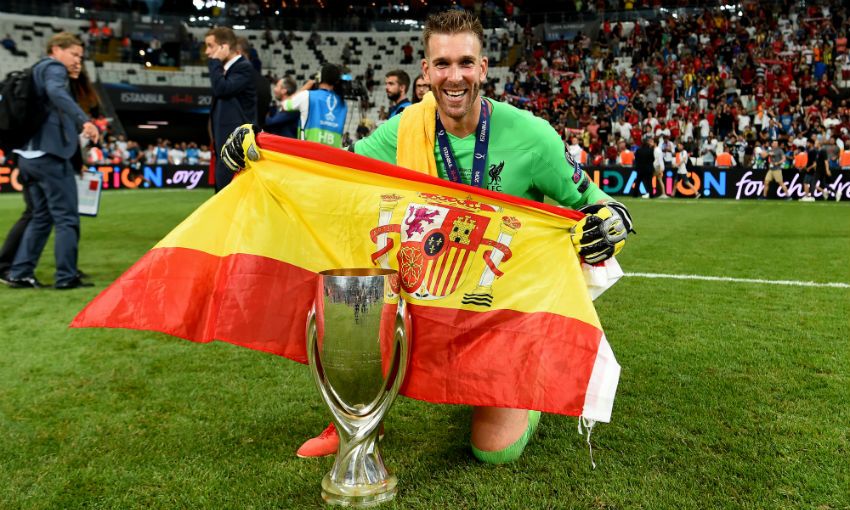 It's a moment Adrian describes as the 'most important' of his career, but one he still chose to dedicate to someone over 1,700 miles away.

A whirlwind 10 days culminated in Adrian becoming the hero in Liverpool's UEFA Super Cup victory when he saved Tammy Abraham's decisive penalty in a shootout with Chelsea.

And supporting him throughout it all was the man he had replaced. The Spaniard had been required to deputise for the injured Alisson Becker partway through the Premier League opener against Norwich City – just a matter of days after signing on a free transfer.

In the midst of all the celebrations that followed his heroics on his full debut for the Reds, the 32-year-old didn't lose sight of why he was in position to earn the first major honour of his career.

Messages were exchanged between him and Alisson before and after the showpiece, with the Brazilian watching events in Istanbul from home as he continued his recovery from a calf injury.

"I told him he was a great part [in Liverpool] being in the final," Adrian revealed to Liverpoolfc.com at Melwood. "And that he was unlucky with the injury, but we're going to fight for it and we're going to get it, for sure.

"After the game he text me again. I text him and said, 'This is for you because you got the Champions League and this Super Cup'.

"Maybe he was not personally there, but his help was there with us in Istanbul."

After stopping Abraham's effort with his feet, Adrian was swarmed by his new teammates and coaches. The tributes began to flow.

Jordan Henderson was "delighted" for the goalkeeper, while Jürgen Klopp declared it a "wonderful story" after doing his best Rocky Balboa impression.

The former West Ham United stopper then had the honour of taking the trophy he had just won up to his hotel room for the night.

"In my time at West Ham many people called me like this," Adrian said of Klopp's outburst. "My name is funny to do this joke.

"The manager was great in that moment. Everyone was happy, smiling in that situation and the manager had a great moment.

"After just one week, I played in the Super Cup and got this great feeling. I felt full of happiness in myself.

"I was having dinner with the guys after the game and I spoke with Millie and he said, 'OK, do you want to take the trophy with you?'.

The motivation for Adrian now is to have many more highlights in a Liverpool shirt to look back on when his career ends.

It's a target he believes is made easier by playing for a team littered with world-class talent.

"We are playing football to live these kind of moments, great moments," Adrian reflected. "Obviously, like life, you can have good and bad moments in your career. But we need to enjoy these kind of games and these kinds of moments.

"You need to enjoy it with your family, best friends, with fans, with the teammates. And also change the mentality like, 'Nothing is done, we need to keep playing'."

"I think, for me as a goalkeeper, they make easy decisions. Honestly, they defend everything like animals! They help me a lot.

"I played against them [the forwards] many times, so now I play with them and I'm enjoying how they play from behind.

"I'm really happy for them because they are doing really well, they have a great connection between them. They are good players individually, but they are good friends in the dressing room also and you can see that feeling on the pitch."

'Champions of England, Europe and the world - not every team can say that!'

Adrian interview: 'Chelsea tie is the first of three finals in a row'

Adrian: We're really disappointed - we could have done much better