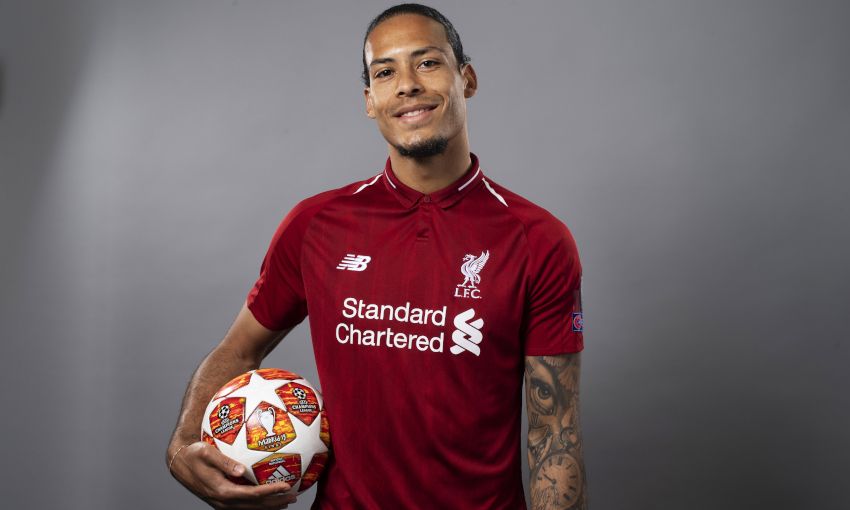 The way everyone associated with Liverpool Football Club lives and breathes the success of the team is what convinced Virgil van Dijk to join.

The centre-half's impact on the Reds following his arrival from Southampton in January 2018 has been profound and he was deservedly named PFA Players' Player of the Year for 2018-19 last month.

But the No.4 would be willing to give up the widespread praise and personal accolades if it guaranteed victory for Jürgen Klopp's side in Madrid this Saturday when they take on Tottenham Hotspur in the Champions League final.

Liverpoolfc.com sat down with Van Dijk at the squad's recent training camp in Marbella for a wide-ranging, in-depth chat ahead of the meeting with Spurs... 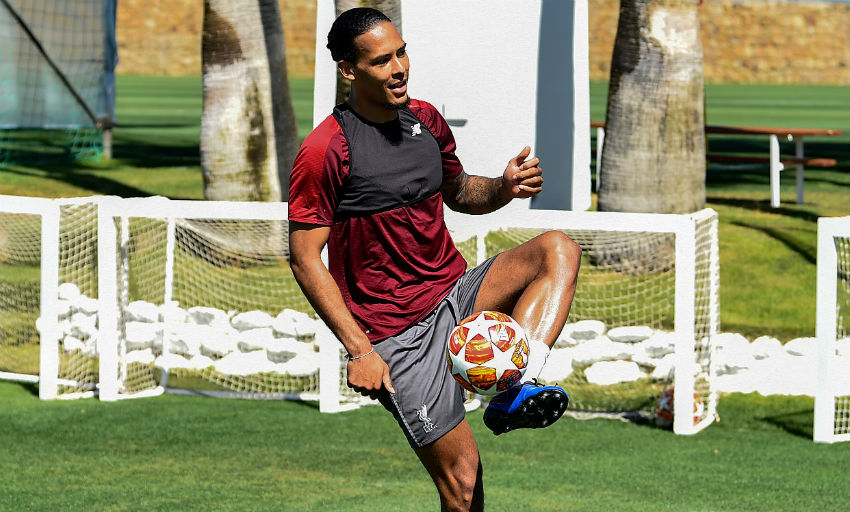 Virgil, one game to go and it's another Champions League final. How does it sound?

It sounds pretty good! We worked hard this season, the season is almost over but obviously we have one big final push left and we are going to give everything that we have got and will see what it's going to bring us.

The final would be your 50th appearance of the season after playing in all 38 Premier League matches. There must have been times when you feared you might miss the next game or you were picking up knocks. Was it just desperation to figure in as many Premier League games as you could?

I think the mindset is always to think that you are never going to play pain-free. Obviously I had moments where I was struggling during the week, but I think at the end of the day what makes me keep going is when that whistle goes at the weekend, I need to be there. I made sure I did the right things around it, make sure I eat good, get treatment, recover well. It's not easy but we did it so far and we have one more push left.

There are lots of international captains around the squad and it's a team full of leaders now. You all drive each other on...

I think that's the most important thing anyway - to tell each other. When there are things that need to be said, I think this group of players is special, at least that's what I'm feeling. Hopefully we can stay together for at least another four or five years and achieve so many things with this group.

Is that the feeling you get when you look at the average age of this squad? It goes from quite young to experienced and all the way up to players at that golden time - 27, 28 - when players historically come into their peak…

Yeah, that's why I think it's a great group. The characters we have in our team, it all fits, it all goes well so far. Any additions that we are going to get in the future, I think the club knows how to do that as well and it all clicks. 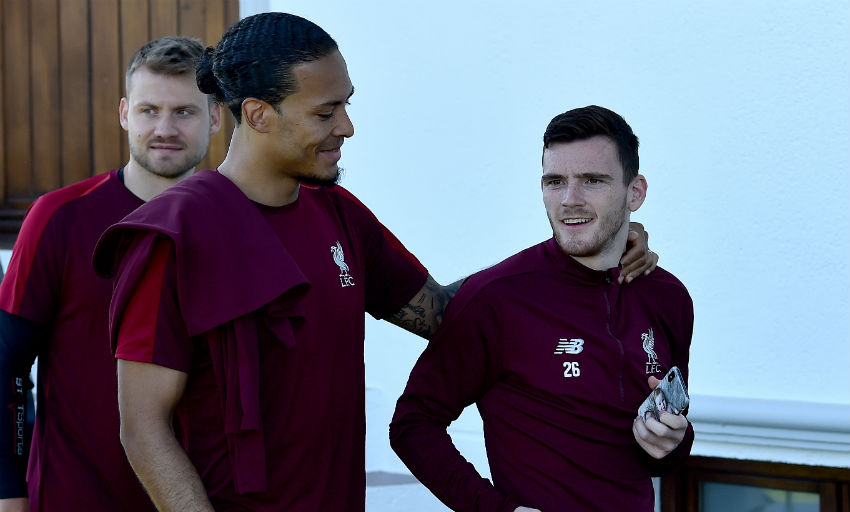 Reflecting on the Champions League, the journey so far and the group stage - you always performed well in the home games, but the away games became a bit of a struggle. But when you needed results and you needed to overcome certain deficits, the true Liverpool comes through then…

I think we always make it a bit difficult for ourselves. But yes, I think the away games in the group stages were poor, especially the one in Naples - but obviously the one in Belgrade was a very poor performance from all of us. We knew it and we made it right at Anfield with a bit of help from Alisson against Napoli with the big save - we all know that he is capable of doing these things.

We did it and after the group stages we had Bayern Munich and then Porto. We did the job perfectly I think. In the knockout stages we were very good, dominant, played very well, and we are where we deserve to be.

The run-in will always be encapsulated by those games against Barcelona in the semi-final, both of them stunning in different ways...

I think I said it after the game over there, it felt so strange because we lost 3-0 but it was like, 'How?' We were sitting in the dressing room thinking, 'How did we lose this 3-0?' The first goal, I should have done better. The second goal was a bit of luck and the free-kick was outstanding. We had chances, we dominated and we put them under pressure. We gave them so much trouble and not a lot of teams have done that over there. We were 3-0 down and we had to find the solution to overcome it.

I had a feeling straight after the game that we could do it, especially if you believe. The whole build-up to the game and the moment that we arrived at the stadium, I felt that this could be a special night.

Obviously you know that they have the best player in the world, I think that they can not even have a chance and he will score. Then it makes it even more difficult, but we did it. After the [opening] goal from Divock [Origi], I think everyone around started to believe as well. Everything just clicked the whole evening.

Divock has been one of those characters this season. We even caught you singing his song - the Saturday Night one - the other week! He's popped up when you've needed him in some unbelievable games…

It's a fantastic song, to be fair - I like it! I asked Robbo for the lyrics because I didn't even know the lyrics before! Div is Div. He's working hard, he's fast and he has qualities that make defenders work for their money basically. He's a great guy. I've got to know him much better this season because last season he was on loan, and he speaks Dutch as well which makes it a bit easier. He's a great guy but he's a very good player as well who has been very important for us this season and he shouldn't be overlooked.

Joel Matip is another one, isn't he? He's waited for his moment and you two have looked brilliant together…

Joel was obviously struggling with injuries in the beginning. I think it's a bit of the other way around from Joe [Gomez]. Joe was obviously unbelievable until his injury and Joel has filled in - Dejan [Lovren] as well when he plays with me. Joel, I'm delighted for him that he's at that level. The way he is performing, that's unbelievable. If you look at the second game against Barcelona, his performance at home was unbelievable. It helps everyone and I'm just very happy to help everyone as well.

The second Champions League final in successive seasons. Have you brought yourself to watch last year's final in full?

Last year's final, I didn't watch anything back, to be fair, besides the goals. They show them everywhere so you can't miss them. It was a very tough day, but there were so many lessons out of that day. It's not like, 'I could have done this better', it was more like the experience and everything that happened over that night. I took so many things with me. To be there this year again is something special and we are going to give everything that we have, and hopefully that's enough.

On your personal story this year then, you were named PFA Players' Player of the Year. The manager has said on a few occasions that you could have gone to any team in the world. But this is the right choice for you, isn't it? Liverpool is your club now…

Yes, it's my club definitely and I'm very proud to be wearing this shirt every day. But it's also one of the reasons when I came here - how everyone lives around Liverpool, lives and dies for the club, want to do everything for us, will be there in tough times. They will also be with us in the good times.

I think this is a real football club and you don't have too many at this level that are living and breathing for a club like Liverpool. It was a very important decision [for me] to make, but so far it has gone pretty well.

Tottenham then, is it going to be like a Premier League game or do you expect it will be different to that?

I think we are going to play our own game, like we always have done in any game we have played. It's one game, anything can happen and we just try to play our game and hopefully give them a lot of difficulties.

We saw when we played them at home that the second half we were struggling a little bit [as] they changed because they were struggling in the first half. So we are going to prepare very well and we started here in [Marbella] and we will have another full week to prepare. We will be prepared for any situation that is going to come across. Then it's all about us, what we do.