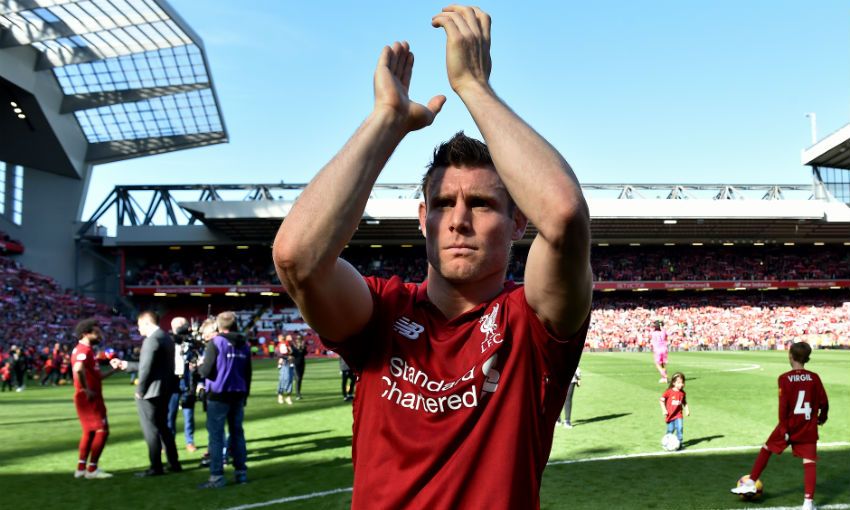 James Milner has 'redemption' on his mind as Liverpool look ahead to the Champions League final.

Following the end of a colossal bid for the Premier League title, the Reds’ sights can now be trained on the task of overcoming Tottenham Hotspur in Madrid.

Estadio Metropolitano will host the showpiece match of Europe’s premier club competition on Saturday June 1 - and Milner believes the efforts of both players and supporters throughout the season merit a successful end to the campaign.

“When you think of 30 wins out of 38, at the start of the season you’d like to think that’s good enough. But obviously that shows how good Man City are as well. It’s disappointing,” the vice-captain told Liverpoolfc.com after Sunday’s 2-0 win over Wolverhampton Wanderers at Anfield.

“We have to be proud of what we’ve achieved. Unfortunately it’s just short, but obviously what we did earlier in the week [versus Barcelona] gives us a chance to go and redeem ourselves and get a piece of silverware because I think everyone deserves a bit of silverware. I think the team especially, these boys, how they grind out results.

“What we’ve been through in the last two weeks from Barcelona away, putting on a pretty good performance and losing like we did, to go to Newcastle with a quick turnaround and grind out a result and then obviously do what we did in midweek and then bounce back again today, knowing it was out of our hands [but] to get that result - I haven’t got enough good words to say about the character within the squad, the ability and the mentality.

“The fans have been unbelievable all year, they’ve lifted us when we’ve needed them, they’ve stuck with us when it’s been tough in games and like I say, the boys deserve a bit of silverware, but the fans do too.”