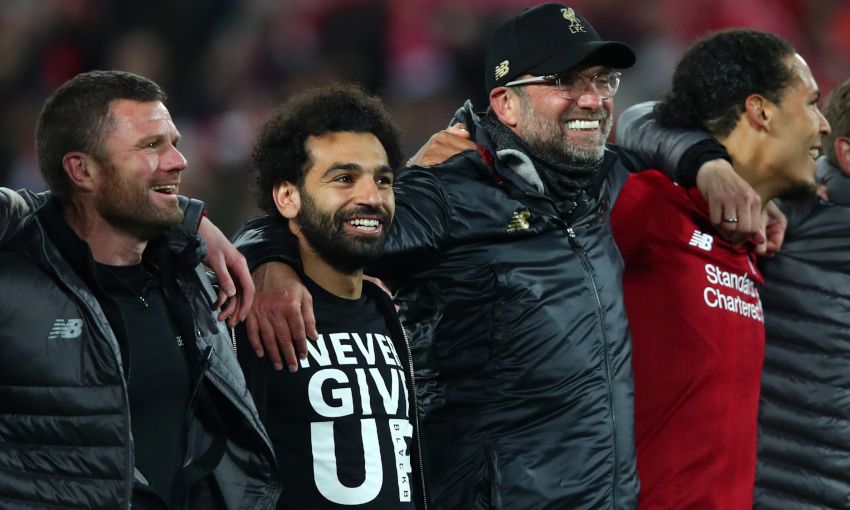 Tuesday night's stunning comeback against FC Barcelona offered a rare opportunity for Mohamed Salah to appreciate this Liverpool team from the outside.

The second leg of the semi-final was the first club fixture the Egypt international has not participated in this season, having been ruled out due to the head injury he suffered in the preceding match at Newcastle United.

Of course, with Salah watching on from the sidelines, the Reds achieved the unthinkable.

Two goals apiece from Divock Origi and Georginio Wijnaldum secured a 4-0 result at Anfield that eliminated Barcelona and set up a second successive appearance in the Champions League final.

Salah joined his victorious teammates in a special, shared rendition of You’ll Never Walk Alone in front of the Kop after the final whistle – and the emotions were still powerful for the No.11 days later.

“It was unbelievable,” he told Liverpoolfc.com on Friday as he collected the Standard Chartered Player of the Month award for April.

“Last season we qualified [for the final] in Rome away, so we couldn’t enjoy it as much [as at Anfield]. Now we qualified at our home, so it was unbelievable.

“Two times in the final in a row is something unbelievable. I hope this season we’re going to win it.”

For now, focus is firmly on the final fixture of the Premier League campaign, with Wolverhampton Wanderers set to visit Anfield on Sunday.

Liverpool are still in contention to claim the title; they will do so if they clinch three points and Manchester City are unable to beat Brighton and Hove Albion.

And Salah declared himself ready to return against Wolves.

“I will be ready, yes,” added the Premier League top scorer.