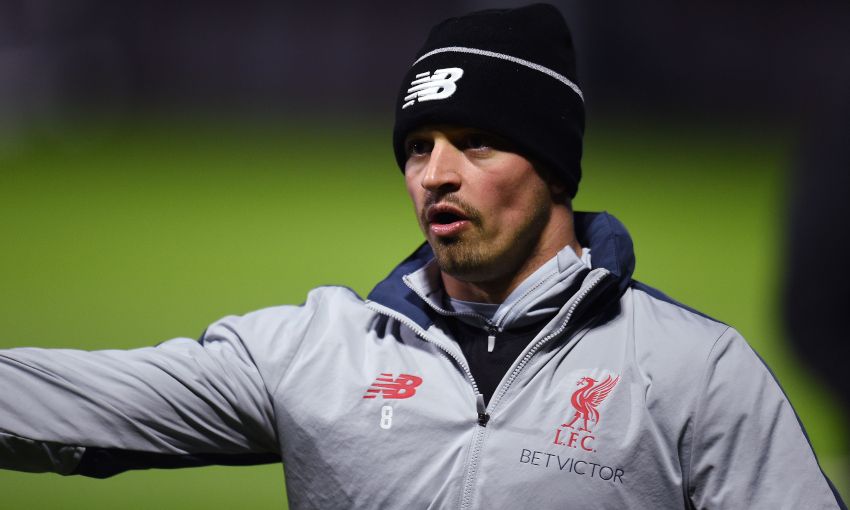 Xherdan Shaqiri insists it's no problem for the Liverpool squad to ignore the results of their top-of-the-table rivals or the chatter around the club's place at the Premier League summit.

Manchester City’s victory against Arsenal on Sunday means the Reds head into tonight’s encounter with West Ham United two points clear at the peak of the division.

Echoing the sentiments of Jürgen Klopp, Shaqiri has outlined why Liverpool’s only focus is on what they can control.

“We don’t want to look to the other clubs – we just look to ourselves,” he told Liverpoolfc.com at Melwood. “We take it game by game, try to win games, to be successful.

“We work hard every day and have fun together – that’s very important in training, to enjoy the time when we are working hard. Then we go into the game to try to win it, to try to produce good performances.”

Statistically speaking, Liverpool have produced their best start to a top-flight season in their history.

One significant contributing factor towards it, Shaqiri believes, is the team spirit that’s been fostered within the dressing room.

“It’s been very important; to be together as a team is so important,” said the No.23. “When you want to be successful, every player has to give everything to the team.

The squad face their next challenge this evening in London.

The Hammers were defeated 4-0 at Anfield on the opening day of the season back in August, but have demonstrated their threat to the teams who currently make up the top six on several occasions so far this term.

“West Ham have made a few transfers and have new players with experience,” Shaqiri assessed. “It is always tough to play against them, but every team has their weaknesses too.

“The manager will give us the information on how we need to play – and the right information to try to win the game.”

One man who will be hoping to pose Liverpool’s defence a headache is Marko Arnautovic.

The Austrian forward is a doubt for the fixture after sustaining a foot injury against Wolverhampton Wanderers recently, but Shaqiri is well aware of what he can offer in attack having been his teammate at Stoke City.

“He is playing with his physicality, he is a strong guy,” he said. “He has a good shot and is a dangerous player against every team.

“But we have good defenders and I hope they will be able to deal with the threat. We need a good performance to try to win the game there.”

By their own admission, Liverpool were not at their best in their last outing as they were held to a 1-1 draw by Leicester City at Anfield.

Shaqiri, though, believes the performance is no cause for concern and is confident the Reds will produce the kind of display that has elevated them to the top of the standings at the London Stadium.

“We are not robots and we sometimes have not the best days, that’s pretty normal,” he explained. “But even on bad days you can win games with a moment of individuality.

“We keep working hard in training and it’s very important to take that work into the game. Then I think when we do that, we bring that onto the pitch, then I am sure we are going to win a lot of games.

“We have to be focused, to have the mentality to go into the game to win, to try to take the lead in the game and produce a very good performance – that’s the most important thing from all the players on the pitch. It’s going to be tough.”