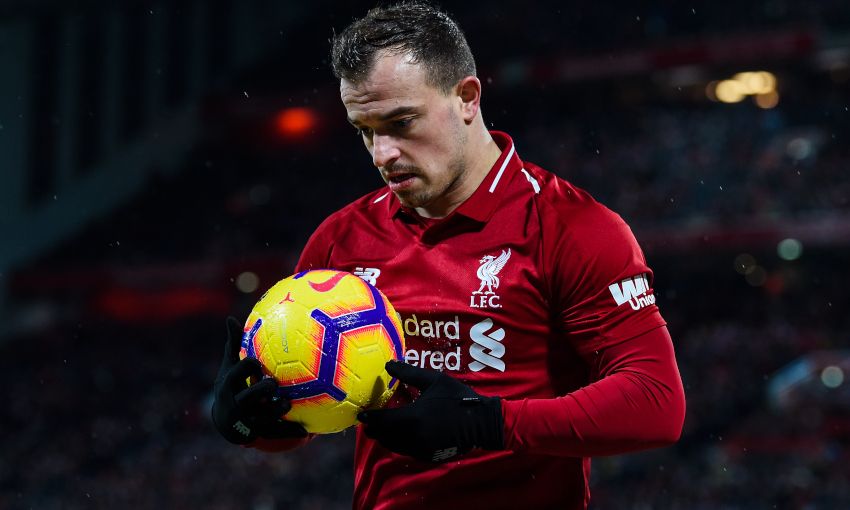 Xherdan Shaqiri has preached the importance of remaining focused and putting the frustration from Wednesday’s draw with Leicester City behind them as Liverpool aim to return to winning ways at West Ham United on Monday night.

The Reds extended their lead at the top of the Premier League table to five points against the Foxes; however, they were unable to collect a victory that would have made their margin of advantage at the summit even greater following Manchester City’s loss to Newcastle United 24 hours earlier.

Nevertheless, while acknowledging disappointment at not securing a win, Shaqiri deems it crucial to take the positives and move on to the next challenge.

He told Liverpoolfc.com at Melwood: “I think it was a good point to take in the end, because although we always want to win every game, it was maybe not our best performance this year. So, in the end, it was a draw and we take the point.

“Obviously being five points clear is better than four. We wanted to win the game, but every game is very tough to play. Leicester have a good team, were very well organised – you saw that in the game – and it was difficult against them.

“If we continue to stay focused at the highest level, I am confident we are going to [continue to] win games.”

In terms of winning titles, Shaqiri is well-versed in what is required as a season approaches its run-in stage.

The playmaker lifted three championships with FC Basel in Switzerland before collecting a further two Bundesliga crowns with Bayern Munich.

“I played in Germany and won titles there, so I have experience of it,” he said. “It has to be a winning mentality and the players need to be focused.

“The mentality is similar [here]. You need to go into games trying to win them and to give everything to do that.

“I am pretty sure with the talent we have in the team we can achieve a lot.

"Now we need to keep going this hard until the end. To work hard in training, to take the training into the games and to keep going. There is a long way to go, but we are in a very, very good way to be successful.”