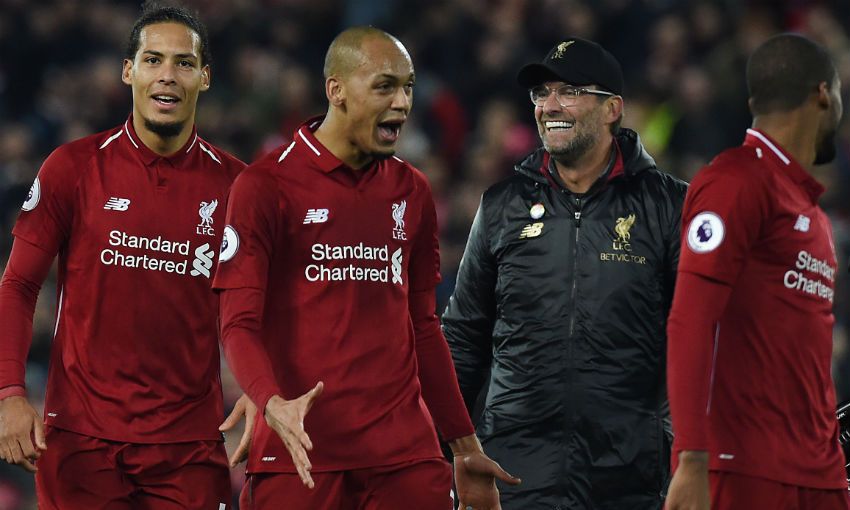 Fabinho had never experienced the Merseyside derby before Sunday - but the intensity of the clash between Liverpool and Everton came as no surprise to the Brazilian.

Jürgen Klopp restored Fabinho to the Reds’ midfield for the meeting with the Blues at Anfield and was rewarded with a strong, assured display from his No.3.

That their team’s 1-0 victory was secured deep into stoppage time, courtesy of Divock Origi, means the 232nd instalment of the derby is unlikely to ever be forgotten by Liverpool supporters.

Fabinho, of course, has only lived in the area for a little over five months following his summer transfer from AS Monaco.

However, that was more than enough time for him to become well-versed in the importance of games involving the city rivals.

“It was really special playing in this game, this derby,” the 25-year-old told Liverpoolfc.com.

“I knew that this city lived for the derby. I remember talking about it in an interview three months ago and as time went by you could see how much anticipation among the fans there was for this fixture.

“The game was great for us, we played well with a good rhythm and we created a lot of chances. I think for everything we did in the game we deserved the victory, even though the goal came in the most unexpected circumstances.

“It was probably one of the few plays in the game which I didn’t expect a goal to come from, but we’re really happy with the win and the way that we won.

“It was what I expected [in terms of intensity]. Premier League games are generally very tough and intense, but derbies are derbies: you don’t want to lose a single tackle or a 50-50 and everyone wants to be giving 100 per cent.

“It was a really tough game and we could feel our legs tiring in the last 10 minutes, but we wanted to get the victory. It was a tough, difficult game and their team didn’t just defend - they came out and attacked, which I think contributed to a great game. They came to play.

“It was a tough, tiring game, but when you come out victorious, you’re really happy with the reward.”

The man himself, though, sees room for improvement.

“I think I played well, like the rest of the team did. Maybe there were a few little things regarding positioning that I could have improved on, but overall I think I had a good game,” he said.

“Me and Gini did our defensive duties and could contribute to creating play as well. Overall, I think it was a good team performance.”

Andy Robertson's derby verdict: We just don't give up>>