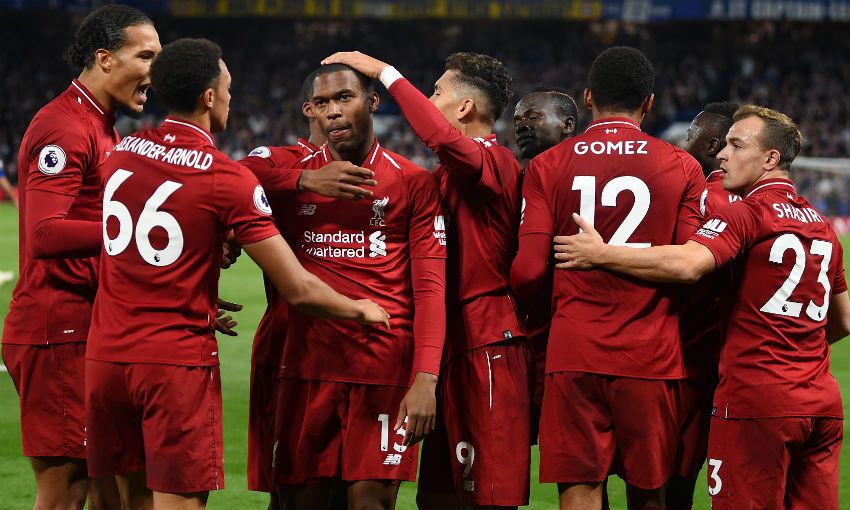 Before Stamford Bridge, there were six.

But when the ball arced over the goalkeeper and into the top corner, Daniel Sturridge joined them.

Now, there are seven players who have scored 50 Premier League goals for Liverpool.

“Yeah it does. I didn’t know that was the amount of people that did it, so yeah it does make me feel good,” a proud Sturridge tells Liverpoolfc.com with a smile.

“I’ve felt like it’s took me a while. I’ve been unfortunate over the last few years to have the odd injury here and there but to be able to reach this milestone is great for me. I would have definitely reached it earlier but at least I got there in the end!

“But I’m grateful to God and my teammates, the management and everybody that’s helped me get there. Some of my teammates have laid some of them on a plate for me so you have to take those ones when you get the easy goals!

“So it’s great to achieve that and long may it continue that I can contribute to the team and score goals and help us win games.”

It was a moment that made the jaw drop; technically flawless as the pressure gauge edged towards breaking point.

Liverpool were losing to Chelsea, their unbeaten start to the Premier League season slipping away as the clock closed in on 90 minutes.

Was it the pick of Sturridge’s top-flight half-century for the club?

In terms of quality and aesthetics, possibly, he says. The striker casts his mind back five years to select the other main contender for that particular accolade: that sublime chip against West Bromwich Albion at Anfield in 2013-14.

“It was near enough the same position actually, that goal,” Sturridge recalls.

“It’s a toss-up between those two I’d say. I liked the goal against Everton at home a few years ago as well, but I feel like all goals, they all feel great.

“It doesn’t matter what the stage of the game is, when it is, where it is, I feel like when you score it feels great. The feeling, the emotion, you feel from the inside when it happens is something special.”

Scoring against certain opponents does evoke something else, though.

“Obviously it’s my old club [Chelsea] which I’ve got a lot of respect for, I’ve got some friends that still play there, so you know, that was a nice feeling. But I think the goals against Everton if you score and the goals against Man United always feel more special than any other goal I think.”

Watch all 50 of Sturridge's PL goals for LFC

There are no plans to stop at 50 Premier League goals for the Reds, either.

“I’m always trying to push myself to the next level and contribute as best I can to the team to allow us to be successful,” the No.15 continues.

“I feel like we’ve been very unlucky actually over the last few years not to win something, so hopefully this’ll be the season when we can achieve that.

“But there’s a long way to go, there’s a lot of obstacles to overcome before we get to that stage when we can talk about trophies and these things. It’s important to just stay focused on each game that we have, not have too much expectations as well, and for everyone to remain calm and humble about everything.

“We have a great squad but it’s important to stay focused throughout the season to get to the end - and hopefully have something to be excited about at the end.”