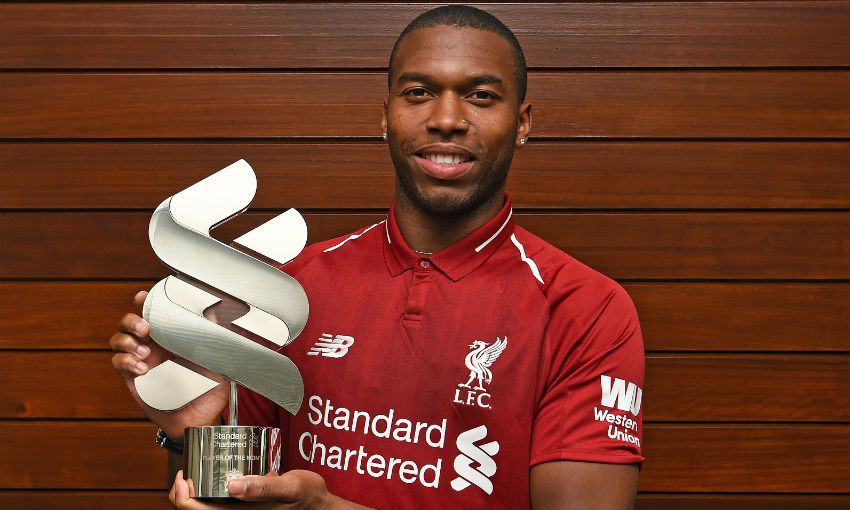 Daniel Sturridge is Liverpool’s Standard Chartered Player of the Month for September.

The striker made four appearances, two of which were starts, throughout the month and scored three times to top the fan poll ahead of second-placed Virgil van Dijk and James Milner in third.

Sturridge’s well-taken header set his team on their way to a thrilling 3-2 Champions League win over Paris Saint-Germain at Anfield, before he struck twice in a week against Chelsea.

His first goal versus Maurizio Sarri’s side ended up being in vain as Liverpool were knocked out of the Carabao Cup, but his second will live long in the memory: a late, long-range effort that secured a Premier League point for the Reds at Stamford Bridge.

Upon being presented with his Player of the Month award at Melwood, Sturridge told Liverpoolfc.com: “It’s good, it’s a good achievement. It was a good month for myself, I felt like I contributed to the team.

“I feel like we didn’t get all the results we would’ve liked to have got, but it was a decent month.”

With his moment of brilliance versus Chelsea having since been awarded both the LFC and Premier League Goal of the Month prizes, it was little surprise that Sturridge chose that as his personal highlight for September.

“Yeah, I think probably with the stage of the game and the time that it was,” the England international said.

“It was a game where we kind of wanted to get a point at least, and it felt as if we deserved it, so it was good to contribute and help the team get a point which I think we deserved.”

That Liverpool emerged from a month that saw them face Leicester City, Tottenham Hotspur, PSG, Southampton and Chelsea twice with four wins, a draw and just one defeat offers proof of the strength of Jürgen Klopp’s squad this season, Sturridge feels.

The No.15 continued: “Of course. We’ve got a very strong squad, every position from back to front, so as long as we all keep pushing ourselves in training and giving the manager opportunities to choose whichever team is necessary depending on the opposition, it’s important for us.

“I think that over the course of the season, the strength in depth is what’s going to allow us to be successful.”