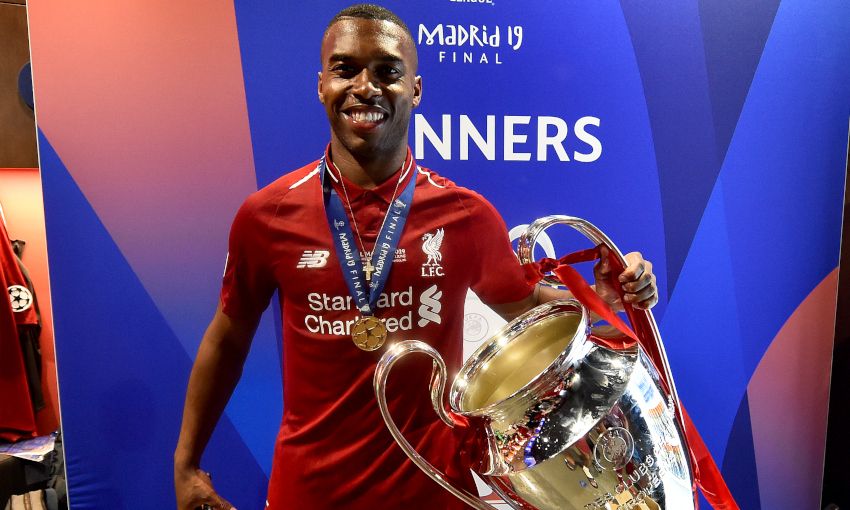 Daniel Sturridge’s supreme finishing ability saw the striker maintain a goal rate of around one-in-two across his six-and-a-half years with Liverpool.

Naturally left-footed, Sturridge’s catalogue of 67 goals for the club nevertheless included efforts of all kinds and no shortage of the spectacular or important either.

Which is why he will depart Liverpool upon the expiry of his contract this summer not only as a newly-crowned European champion but as one of the Reds’ great forwards of the modern era.

Signed from Chelsea in January 2013, the England international opened his account within seven minutes of his debut and signalled the prolific potential he possessed by netting 10 more times before the end of the season.

Paired with Luis Suarez in a fearsome attacking system developed by Brendan Rodgers in 2013-14, Sturridge’s coolness in front of goal was one of the driving forces behind an unexpected title challenge.

He struck 21 league goals that season, second only to teammate Suarez in the division, as Liverpool ultimately finished second in the table and secured a return to the Champions League.

Injury cruelly denied him the opportunity to build on the positives of his first full campaign with the club, or feature on Europe’s biggest stage, but Sturridge worked his way back to become a regular starter when Jürgen Klopp was appointed manager.

Goals against Manchester United and Villarreal helped nudge the Reds forward in their run to the Europa League final in 2015-16 and it was the No.15’s impudent, prodded finish that put his side ahead on a night that sadly ended in defeat.

Though his game time would decrease as Klopp reshaped the team, Sturridge remained a go-to man and his class shone through in the penultimate match of 2016-17 when his clinical opener kept Liverpool on course for victory at West Ham United and qualification for the Champions League.

He netted his first goal for the club in the tournament the following season, though a loan move to West Bromwich Albion in the second half of the campaign meant he watched from afar as the Reds fell at the final hurdle.

But Sturridge returned last summer rejuvenated. “I’m part of an unbelievable group, we have a chance to be successful this season,” he said, prophetically, during pre-season.

“Everybody is pulling together and being part of that unity – being together as one and trying to make this team successful – is what it’s all about.”

And so it was, as the 29-year-old made 27 appearances in all competitions during an historic campaign for Liverpool, who accumulated 97 Premier League points before winning a sixth European Cup last Saturday.

There were flashes of brilliance from Sturridge along the way, including a crucial header in a thrilling Champions League win over Paris Saint-Germain and a sensational long-range equaliser against former club Chelsea at Stamford Bridge.

“I contributed and even the players who haven’t played a minute [did],” said the striker after collecting his winner’s medal in Madrid, echoing the manager’s sentiments throughout the season.

“There are guys who have been on the bench and haven’t played a single minute but have been a part of it: from training, to acting like the opposition that we have been playing against, to doing a job, to sacrificing themselves and the way they play just to do a job on the training field.

“[Winning the Champions League is] something so momentous and something we were striving and working for, for a long time.”

It was a fitting way to say farewell.

Sturridge: I'm loving having Oxlade-Chamberlain back in training!