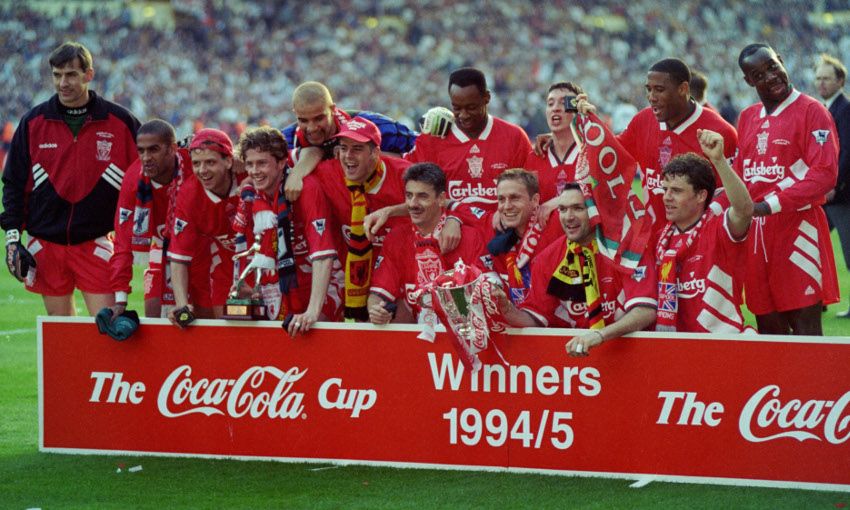 Ahead of Liverpool making a record 12th League Cup final appearance on Sunday, we are recapping their previous experiences of the competition's showpiece fixture - today's edition looks back at victory in 1995 and a treble-launching 2001 win.

Liverpool ended an 11-year wait to get their hands back on the League Cup when they defeated Bolton Wanderers in the final in 1995.

Steve McManaman was the star of the show at Wembley, scoring both of the Reds' goals thanks to superb solo efforts in a 2-1 win over First Division opposition.

The Scouser opened the scoring the 37th minute with a brilliant run and finish before repeating the trick in the second half to give Roy Evans' men a two-goal cushion.

But the Reds hung onto the win and gave Evans his first honour as manager of the club.

After the game, the boss spoke about his star man McManaman, saying: “The two goals were fantastic. Sometimes he does need a kick up the backside, but they were really two great goals.”

Bolton came into the game as firm underdogs but had hope of causing an upset having knocked Liverpool out of the FA Cup in the 1992-93 season.

Though the Trotters were denied by the brilliance of the McManaman in the final, they did earn themselves promotion to the top flight in the same season when they returned to Wembley to beat Reading in the play-off final.

Skipper Ian Rush climbed to steps to hoist the trophy in what would be the Reds’ last success at the old stadium before it was demolished.

Meanwhile, McManaman heaped praised on Liverpool's brave opponents, saying: “Give Bolton their due. They battled back in the second half like we knew they would but it was a great team effort by our lads and I was just happy to get two goals like that.

"It's nice to get a win against them for a change, but most of all we are pleased to have won a trophy again.

“A lot of people wrote us off at the beginning of the season but we have come back and won one of the three major trophies."

Liverpool kicked off their love affair with the Millennium Stadium when they won the League Cup in Cardiff in 2001.

Gerard Houllier’s side needed penalties to see off First Division outfit Birmingham City at the stadium that served as a temporary home for English finals while the new Wembley was being built.

It was the Frenchman’s first honour as Liverpool manager, in what would go on to become a memorable season for him and his charges.

Robbie Fowler opened the scoring on the half-hour mark with a wonderful dipping effort and it looked to be like that strike would be enough to hand the Reds the cup.

However, the underdogs refused to lie down and forced extra-time when Darren Purse dispatched a penalty in the dying moments.

A test of nerve from 12 yards out was required to separate the two teams after an even extra 30 minutes, and Sander Westerveld emerged as the hero by saving two Birmingham pens in the shootout.

Jamie Carragher tucked his penalty away in emphatic fashion in sudden death before his Dutch colleague between the sticks denied Andy Johnson to help deliver the first of three trophies in the 2000-01 season.

Houllier thought his side deserved the accolade on the day and said: “It was a great final and I think we deserved it on the whole. We have to give credit to Birmingham because they gave us a game tonight.”

Fowler added: “It’s a stepping stone and gives us a platform. At Liverpool we should be winning trophies so hopefully this can be the start and a platform to go on and win a few more trophies.”

The striker was correct in his post-match comments, Liverpool returned to Cardiff that season to win the FA Cup before achieving UEFA Cup success in Dortmund.

Jürgen on AOC development, squad size and delivering at Anfield

Classic: How McManaman lit up Wembley in League Cup final