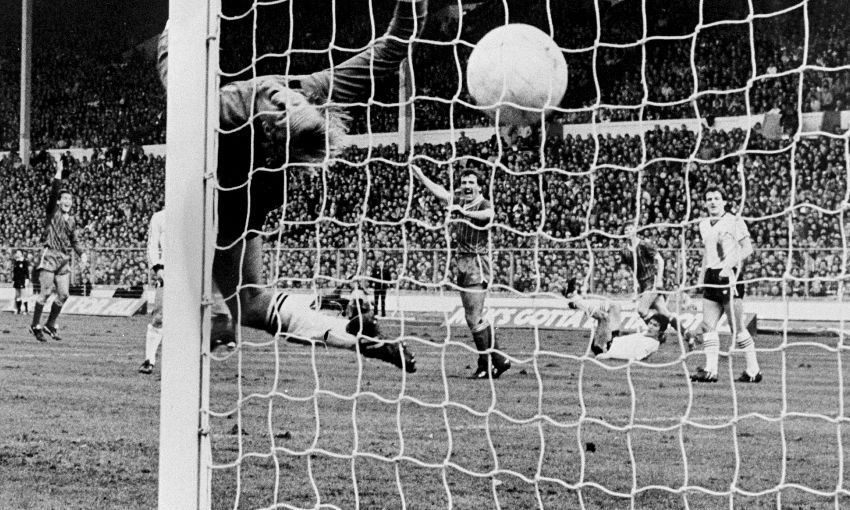 Ronnie Whelan had so much success in the League Cup that it led to supporters christening him the 'Milk Cup kid' following important goals in consecutive finals.

The former Reds midfielder won the Milk Cup – the first domestic competition to bear the name of a sponsor – three years on the bounce as part of a Liverpool side that claimed four straight League Cups.

Having moved from small Dublin side Home Farm in 1979 just days before his 18th birthday, the 20-year-old scored twice in the 1982 League Cup final against Tottenham Hotspur in a 3-1 win over star-studded opposition.

The ensuing celebrations from the Irishman were iconic, with his late equalising goal followed by uncontrollable movements that he said mirrored ‘a young foal trampling across a field’.

After his second to put the Reds 2-1 up in extra-time, Whelan leapt over the advertising hoardings and sprinted with glee to get closer and celebrate with the travelling supporters.

“I didn’t know what I was doing,” Whelan told Liverpoolfc.com. “I jumped over the barrier at the back and could hardly make it back over again!

“You’re so elated and excited that you’ve scored at Wembley and then you go running off and you don’t know what you’re doing.

“Then you see it later on and think, ‘my God, what were you thinking of?’”

Whelan was at it again a year later. He scored the winner in a 2-1 victory over Manchester United in the final with a wonderful curling effort into the top corner.

He insisted he had learned his lesson in how to celebrate after his previous League Cup final appearance, adding: “I wasn’t going to run that far [again]! I just ran back towards our own goal, the halfway line.”

One could forgive excessive celebrations for a goal like that, though.

The ball fell to Whelan outside the area and he instantly eyed up the part of the net he wanted to hit before firing the Reds to yet another honour.

“You don’t think about it,” he revealed. “I was one of those people that if you were going to get stick for trying it then fair enough, I didn’t care. And if I missed it and looked like a fool then I’d still try it.

“It was something I saw when it came off Frank Stapleton’s leg and I spotted [United goalkeeper] Gary Bailey very far across over his goal and there was a big space to put it into.

“You don’t even think about getting your technique right, it’s instant. It’s coming back at a nice pace and you hit it to that corner where you think he’s not going to get it. Thankfully, it went in.”

Another 12 months later, Liverpool required a replay to beat Everton in the 1984 final under new manager Joe Fagan.

The first encounter at Wembley ended goalless but Graeme Souness provided the winner at Maine Road to land the club a fourth League Cup in as many years.

Whelan featured in both of those matches and reckons the feat his side achieved over that four-year period will never be repeated.

He said: “Back in the 1980s, it was a big thing to win. Especially getting to Wembley for the fans and if you won it then you’d be in Europe in March so you could kick on and try to win the league and European Cup as well.

“I don't think anyone will ever win four in a row. If you go in for a competition then you’ve got to try to win it.

“It wasn’t the FA Cup – that was the one you wanted to win. But the League Cup was another cup. I was a kid from Ireland who had come over and I wanted to go to Wembley and win trophies for Liverpool Football Club.

“The thing at Liverpool at the time was, you won a trophy and it was like ‘well done, see you next time when we do it again’.

“I remember winning my first league title and Bob Paisley went around with a shoebox with the medals in and just shook hands saying, ‘see you on July 5 for pre-season’. That was it.

“Maybe that was why we were so successful, we didn’t dwell on what we’ve just done. It’s unbelievable. We also won three leagues in the same time as well and two European Cups along the way. It says a lot about the whole Liverpool ethos.”

Jürgen on AOC development, squad size and delivering at Anfield