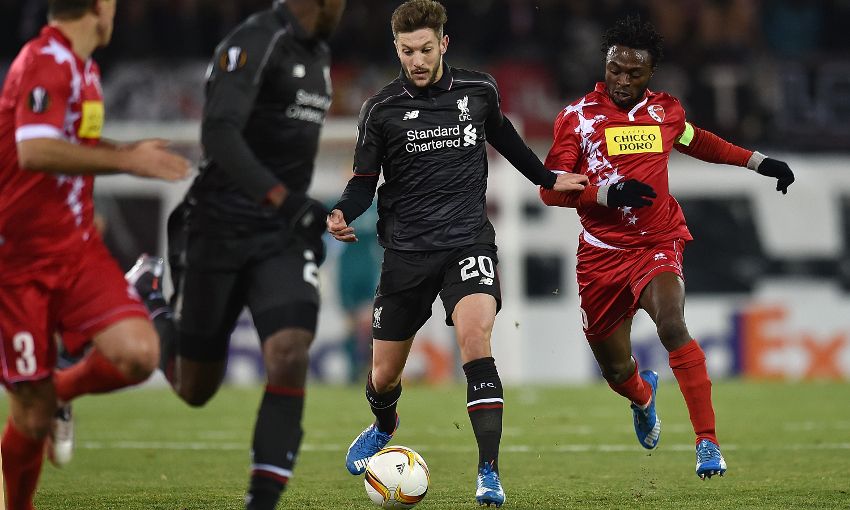 Liverpool sealed top spot in Europa League Group B with a goalless draw against FC Sion at the Stade Tourbillon on Thursday night.

The point confirmed the Reds finish in first position in the table and will be seeded for the draw for the knockout phase of the competition.

It was a game of few chances in Switzerland, but the visitors were buoyed by the return of Jordan Henderson to the starting line-up for the first time since August 17 and by Philippe Coutinho’s comeback from injury as a second-half substitute.

Elsewhere, there were also berths for Kolo Toure and Brad Smith as Jürgen Klopp elected to make six changes to the side he’d selected at Newcastle United on Sunday.

In bitterly cold conditions in Sion, Liverpool got the game underway knowing they’d clinch first in Group B if they were able to avoid defeat and ensure they’d be seeded for the draw for the Europa League last 32.

The contest began openly in the shadow of the Alps, with both teams fashioning a handful of half chances before Divock Origi came close with a dipping drive from range that bounced just wide of the post with 18 minutes on the clock.

On 29 minutes, the Belgian striker almost profited from a through ball from Adam Lallana, but found himself thwarted by a last-ditch challenge from Leo Lacroix as he attempted to strike goalwards.

But despite the endeavours of the teams, clear-cut chances were at a premium with neither Simon Mignolet nor his Sion counterpart, Andris Vanins, unduly troubled during the opening 45 minutes.

In the early stages of the second half, James Milner deflected an Origi centre straight at Vanins before Lacroix headed a corner over the crossbar at the other end.

With an hour played, Klopp elected to introduce Coutinho into the action in an attempt to inject some guile into the Reds’ attacking play, with the No.10 replacing Milner.

However, Liverpool needed Mignolet to be alert soon after when a dangerous low cross from the right was almost hooked goalwards by Ebenezer Assifuah on the spin, but the goalkeeper was able to gather at his near post.

With 20 minutes remaining, Origi beat Vanins to a ball into the box, but with the angle tight and the ‘keeper back on his feet quickly, the forward couldn’t turn the opportunity into an opening goal.

Henderson made way for Jordan Rossiter with 13 minutes left, while Origi went agonisingly close to reaching an inviting Smith delivery, but it was to end goalless in Switzerland.