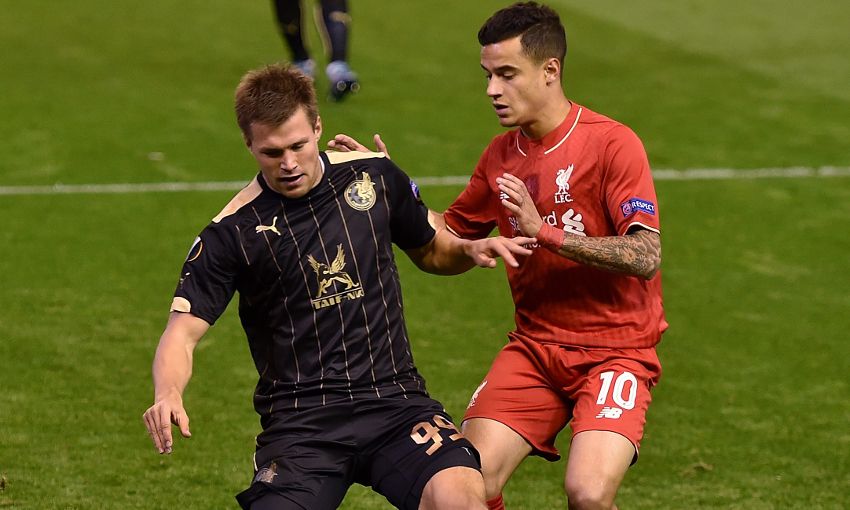 Jürgen Klopp’s first home game in charge of Liverpool ended in a draw as they were held 1-1 by Rubin Kazan in the Europa League at Anfield on Thursday night.

Despite an encouraging start from the Reds, the Russians took the lead after 15 minutes when Marko Devic controlled Oleg Kuzmin’s cross on his chest before prodding an effort into the Kop end net.

However, Kazan were reduced to 10 men when Kuzmin collected his second booking of the night 10 minutes prior to the break following a foul on Emre Can.

And it proved costly as from the resulting free-kick, Divock Origi nodded down for the German midfielder to sweep in from close range and level up the scoreline.

Liverpool piled heavy pressure on the visiting goal in the second half, with the fit-again Christian Benteke coming closest when he saw an effort rebound off the post, but Kazan held out to pick up a point.

Klopp’s first Anfield teamsheet indicated just one change to the side that had taken to the pitch against Tottenham Hotspur on Saturday, with Joe Allen replacing Lucas Leiva in midfield.

On the bench, however, Benteke and Roberto Firmino returned from injury to take their place among the substitutes.

While undoubtedly a special occasion under the Anfield floodlights – the early atmosphere reflecting the significance – there was a clear job to do for Liverpool.

Having drawn both of their opening Europa League Group B fixtures, the Reds were in need of victory to bolster their hopes of progression.

The hosts started assertively and with eight minutes on the stadium’s new-look scoreboard, Can sent a curling effort inches wide of the post and into the side netting.

However, Kazan proved they were ready to spoil the party and with 15 minutes played, they took the lead. Devic held off the challenge of Nathaniel Clyne to control Kuzmin’s cross on his chest before stabbing beyond Simon Mignolet.

Next, Philippe Coutinho jinked his way into space inside the Kazan box and struck wide of the far post with his left foot.

Just after the half-hour, both the Brazilian and Lallana tested visiting goalkeeper Sergei Ryzhikov in quick succession; however, the Reds required a fine finger-top stop from Mignolet to deny Blagoy Georgiev’s turn-and-shot from 10 yards at the other end.

But with 10 minutes of the first half remaining, Kazan found themselves a man down when Kuzmin collected his second yellow card of the evening following a barge on Can.

The resulting free-kick from the left was whipped in by Coutinho, nodded down by Origi and the Reds’ No.23 hooked in from point-blank range to make it 1-1.

Klopp opted to make a change at half-time, Lucas coming on for Allen, with Liverpool looking to make their numerical advantage count as they attacked the Kop.

The hosts certainly cranked up the pressure on their opponent’s goal, with Coutinho going close on a number of occasions.

The No.10 was withdrawn from the action with 63 minutes played for the returning Benteke prior to Firmino’s arrival in place of Origi.

However, with time ticking away, Benteke spurned a good chance to give Liverpool the lead when he side-footed Clyne’s centre over the bar when well-positioned and unmarked.

The Belgian then struck the base of the post with a precise effort from Lallana’s lay-off, prior to the latter stinging the palms of Ryzhikov with an edge-of-the-box blast.

The shots continued to rain in on Kazan’s goal, but they were able to hold out and ensure Liverpool had to settle for a third 1-1 Europa League draw of the campaign.