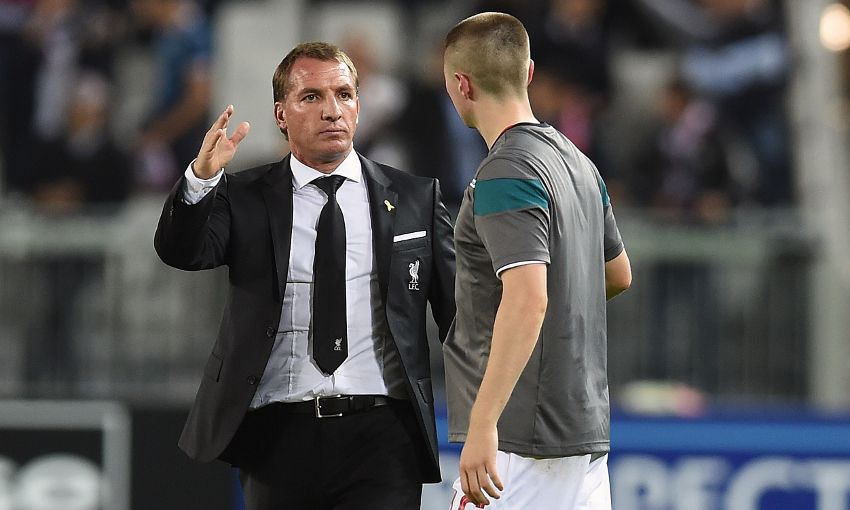 Brendan Rodgers was left 'satisfied and encouraged' with the performance of a young Liverpool side as they drew 1-1 with Bordeaux on Thursday evening.

Teenage midfielder Jordan Rossiter made his European bow as he was included in the starting XI for the Reds' first Europa League fixture of the new season.

And he was soon joined in the middle of the park by Pedro Chirivella, who replaced the injured Kolo Toure after just 28 minutes to make his competitive debut for the club.

The average age of the team at that point stood at just 21.7, while Cameron Brannagan's late introduction made it a successful night for all those involved at the Academy.

As a result, Rodgers wasn't too disheartened to see his team held to a draw after Adam Lallana's brilliant opener was cancelled out in the second half.

"You’re obviously disappointed, but I was more satisfied and encouraged by the performance," the boss told reporters in his post-match press conference.

"We had so many young players in the team – and some of these players were playing their first games – so I thought it was very encouraging.

"Coming away in European games is always tough to do, but with the lack of experience we had and a lot of the young players, I was delighted with that.

"You’re disappointed to concede, the striker had too many touches in the box and then they got a bit of good fortune when Emre [Can] slides and the ball ricochets to him [Jussie].

"But if you can’t win, especially away from home in European games, it’s important you get a point – and we certainly at least deserved that."

Rodgers was particularly pleased with the manner in which Rossiter and Chrivella combined to take control of the midfield in the second half.

The Reds manager was also keen to highlight that the likes of Jordon Ibe and Joe Gomez, though considered first-team regulars, are still in the early stages of their careers.

"I was so proud of them tonight," he added. "I’ll always give young players an opportunity if they’ve got the personality.

"This is part of the growth of a young player – do they go out on loan or do you keep them here and put them under that pressure?

"A lot of our players are actually out on loan, but Jordan Rossiter and young Pedro gained more control as the game wore on.

"They were able to combine better with other players. It’s invaluable experience for them and I thought they acquitted themselves very well.

"Jordan came off with cramp and Cameron [Brannagan] comes on and slides into the position well.

"You take those two and you look at Jordon Ibe who is only 19 on the side, Joe Gomez is 18, so there is great encouragement there for young players and the supporters when they see them giving that type of performance."

With Martin Skrtel and Dejan Lovren having started the Premier League season as Rodgers' preferred centre-half partnership, Mamadou Sakho was forced to wait until this evening's game to make his first appearance of the campaign.

The Frenchman was handed the captain's armband on his return to his homeland, and rewarded the manager's faith with a dominant performance at the heart of an inexperienced defence.

"He was certainly outstanding in his performance," Rodgers continued.

"He knows he’s had to be patient and his attitude has been first-class. We won our first few games, our performance was good, so it was difficult up until the international break for him to play.

"But he’s trained very well and remained very professional, done his extra work on his fitness and you see tonight he has got his rewards for that.

"So he certainly comes into the reckoning for the weekend."

Meanwhile, on the injury that forced off Toure, the most experienced player in the starting XI, the manager explained: “[It was a clash] with Simon [Mignolet]. He got a dead leg. He obviously tried to play on and had to come off.

"I felt in that period – you take your most experienced player off – the team showed great character. We had to readjust and put players in different positions, but they stood strong and coped very well with it.

"It was a dead leg that Kolo had."

Emre: I know all about Dortmund's threat

'We’ve proved this year we can beat anyone'