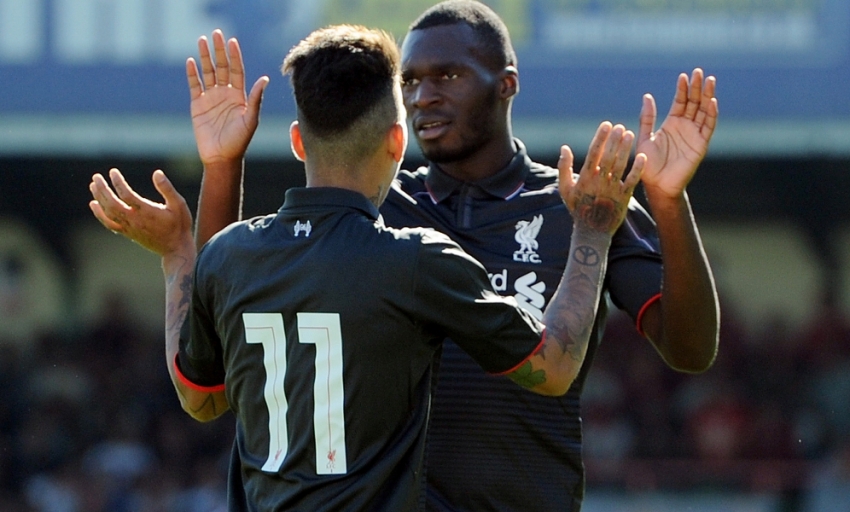 Christian Benteke marked his first Liverpool appearance with the sweetest of strikes as the Reds rounded off pre-season by beating Swindon Town 2-1 on Sunday.

The new striker was on target with an awesome volley from 20 yards out in the opening stages of the second half to hand Brendan Rodgers' side an advantage.

But the hosts responded 15 minutes later through Jonathan Obika, who levelled proceedings with a fine finish of his own by curling home from inside the box.

The final say went to Sheyi Ojo, though. The youngster's shot from distance in the 87th minute forced an error by the goalkeeper and bounced in to secure the result.

The big news of Rodgers' team selection was a first opportunity to see summer signings Benteke and Roberto Firmino in action - both selected from the start at the County Ground.

Swindon named two on-loan Reds in their side, Kevin Stewart and Jordan Williams, while Liverpool Academy goalkeeper Lawrence Vigouroux played between their posts as part of a trial with a view to a temporary switch of his own.

Firmino could have opened his account 90 seconds into the game as he bounded in behind from a one-two with compatriot Lucas Leiva, but the outrushing goalkeeper got his body firmly in the way to stop the attacker.

Joe Allen was the next to threaten as he moved onto a pull-back by Alberto Moreno on the edge of the area and side-footed towards the far corner. But Brandon Ormonde-Ottewill crucially blocked.

It proved to be the last contribution from the Welshman, who was forced off early with a knock moments later. Joao Carlos Teixeira was introduced to stake his claim in midfield.

Benteke should have broken the deadlock in the 18th minute. Firmino's pressure won possession high on the right flank and he squared instantly for the Belgian, whose first-time effort lacked enough power to beat Vigouroux.

The stopper was a mere spectator when a short corner was worked to Teixeira on the left. The Portuguese shaped a stunning curler that ultimately drifted narrowly off target.

Emre Can was featuring in his first senior game of the summer and was clearly keen to make an impact, whistling a number of shots at Vigouroux, the closest a drive from 20 yards on 37 minutes that flew just over.

If the Reds had perhaps been guilty of squandering their opportunities before the break, Benteke made amends with a goal worthy of any game three minutes into the second half.

There seemed little danger when Teixeira dinked a pass into the 24-year-old, who controlled with his chest and lashed a sensational volley unstoppably into the back of the net in one swift, decisive movement.

Lazar Markovic almost teed Benteke up for a second but the cross was behind him and the finish scooped over the crossbar. Next it was an offside flag denying the Belgium international as he beat Vigouroux.

Swindon made their visitors pay on 63 minutes when Nathan Byrne picked out an assist across the penalty area to the right for Obika to curl precisely into the opposite corner for 1-1.

Benteke and Firmino were then withdrawn with a quarter of the contest remaining as Rodgers handed a number of the younger players on the bench a chance to impress.

One of them, Ryan Kent, produced a perfectly-timed dummy to let Teixeira's pass run into Moreno inside the danger zone but the Spaniard was thwarted in his attempt to score and the rebound was eventually cleared.

However, fellow substitute Ojo's ambitious blast in the closing moments was fumbled by the otherwise impressive Vigouroux and looped underneath the bar to hand Liverpool a win in their final pre-season run-out.