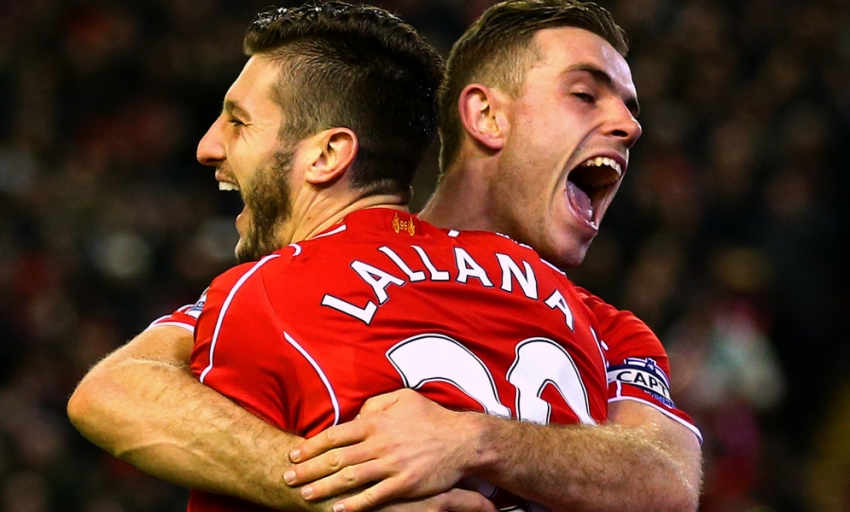 Liverpool signed off 2014 in attacking style as Adam Lallana struck a brace to help secure a satisfying 4-1 Barclays Premier League victory over Swansea City at Anfield on Monday night.

Full-back Alberto Moreno kicked off the scoring by starting and ending a penetrating passage of team play in the first half to hand Brendan Rodgers' charges a lead they thoroughly deserved at the break.

That cushion was quickly doubled after the restart by a freak Lallana goal, the ball bouncing off the midfielder from a goalkeeper clearance, sailing into the air and ultimately the net in front of a delighted Kop.

Within seconds, Gylfi Sigurdsson responded at close range. Yet a more traditional Lallana conversion and a Jonjo Shelvey own goal ensured the festive cheer continued for Reds fans with a second successive win.

When teamsheets were submitted ahead of kick-off, Liverpool's showed four alterations to the XI that had started a 1-0 victory over Burnley on Boxing Day - Emre Can, Javier Manquillo, Simon Mignolet and Moreno were all brought in by Rodgers.

The last man to score previously at Anfield had been centre-back Martin Skrtel, with that towering header from a corner to save a point deep into stoppage time against Arsenal eight days ago. With five minutes on the clock here, he attempted to repeat the trick.

Jordan Henderson - captaining the Reds from the outset, with Steven Gerrard among the substitutes - floated an inviting delivery to the back post for his Slovakian colleague to attack. He climbed above Federico Fernandez, but the nod was too close to Lukasz Fabianski.

The hosts' passing and invention in the opening exchanges was promising, most pertinently when Raheem Sterling swept a pass out to Moreno, the Spaniard ever keen to creep forward given the attacking licence afforded by a wing-back berth.

His powerful centre into the Swansea penalty area was aimed in the general direction of several teammates, but it was Sterling who latched onto it. The No.31's first-time hit was fierce but Fabianski pushed it out and Lallana looped the rebound over.

Philippe Coutinho buzzed around with the freedom to bother, lashing wide of the right post from distance with exactly half of the opening period played. An almost carbon copy approach to the winner at Turf Moor then saw the Brazilian search for Sterling, only for Fernandez to recover.

Mignolet comfortably collected a Nathan Dyer header and Wilfried Bony thrashed an ambitious drive high into the Kop as the visitors warmed up, but they soon found themselves trailing to a flowing team move in the other direction after 33 minutes.

Mamadou Sakho threaded an incisive pass into Moreno and the defender laid it infield. By the time momentum had carried him into the opposition box, the ball had moved from Lallana to Henderson and into the middle, where the No.18 forced beyond Fabianski.

The Swansea stopper had to be alert and agile to keep the deficit to one when Coutinho danced into space on the left flank and walloped at the near post, and again from the same player at long range moments later, meaning the sides retired for half-time with the score 1-0.

It did not stay that way for long after the interval, due to a whirlwind three minutes. Firstly, Lallana's diligence in closing down reaped unlikely rewards when a Fabianski clearance struck the playmaker and careered into the net from the edge of the area.

The Swans' riposte was immediate and served by the left boot of Sigurdsson, who pounced on a loose ball as Sakho dealt with the threat of Bony and calmly placed a finish past Mignolet to reduce the travellers' arrears in quickfire fashion.

Liverpool's custodian was the reason that their lead was not eradicated by a thunderous Bony blast, while only the post denied Sterling's left-footer of fine technique following another sweeping counter-attack involving Moreno and Henderson once more.

The tempo eased a touch, until the 61st minute and the Reds' third. Coutinho's sublime skill was the architect, teeing up Lallana with a pleasing flick. From there it was all about the No.20, who glided around challenges into shooting distance and sent a low hit into the corner.

Rodgers' team then notched a fourth goal in a competitive encounter for the first time in this campaign when another Henderson corner caused concern, forcing former Red Shelvey to nod into his own net at an awkward angle.

Bafetimbi Gomis struck the upright late on, but the scoring spree finally stopped as the seconds ticked away in Liverpool's 59th fixture of the calendar year, which ends in football terms with the Reds in eighth place and within five points of the Champions League qualification positions.