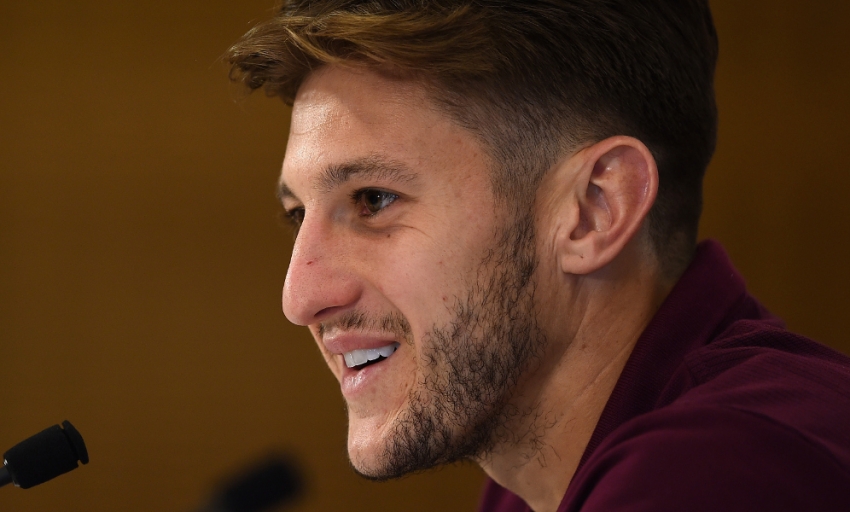 Adam Lallana still finds the time to study the occasional old clip of Real Madrid legend Zinedine Zidane - the man he used to idolise as a youngster growing up and learning his trade in Bournemouth.

Lallana arrived on Merseyside from Southampton in the summer; however, Liverpool fans were forced to wait for a glimpse of him in action due to a knee injury he sustained during the Reds' tour of the United States.

Once recovered, the midfielder set about endearing himself to the Anfield faithful, and his fleet-footed, dexterous approach served up a dazzling debut goal against West Bromwich Albion in October.

Tinkering with the ball at his feet, Lallana tied three defenders up in knots before darting onto Jordan Henderson's return pass and arrowing beyond Ben Foster to score his first Liverpool goal.

It was the sort of spontaneity which the midfielder has delivered in flashes so far this season, be it turning markers inside-out with impulsive twists or burrowing through swathes of players with fine close-control.

Lallana is keen to deliver more of the same over the coming months and so the No.20 has been committing himself to power-enhancing sessions in the gym, as well as the occasional browse of the Zidane archives.

"One thing people might not know about me is my grandfather is Spanish, from Madrid," Lallana told NBC Sports. "I don't know if it influences my game, and he never takes credit for it. He isn't a massive football fan, actually.

"Interestingly, though, my idol growing up was former Real great Zidane. I watched a lot of him growing up. The way he plays. Even now, he's a coach at Real but I still go back and watch those clips."

He added: "Pace isn't a huge part of my game, but playing the percentages, mathematically, if you can add an extra yard of pace or a couple of percentage points to your game, then that's massive nowadays.

"So I still do a lot of work in the gym to improve my pace, power and strength to try to get that little bit more explosive power to my game. I'm always working to improve."

Lallana, who has now racked up 12 appearances for the Reds since joining the club in July, insists he's been impressed by Brendan Rodgers' methods and, in particular, how the manager has sought to integrate new players into the squad.

"Working for Brendan has been brilliant," said the 26-year-old. "He's a great manager, he's very hands-on, works very much with the players, and his man-management skills are good.

"He even speaks Spanish to a lot of the lads who can't speak English. He's tactically clever and sees things. And he always wants to improve. He's always watching games, looking to tweak things differently. He's a very, very clever manager.

"My aim for this season is to settle in as well as I can to the group and contribute as much as possible to getting into the top four again. And hopefully win a bit of silverware. We feel that if we keep working hard, a really good performance is around the corner."