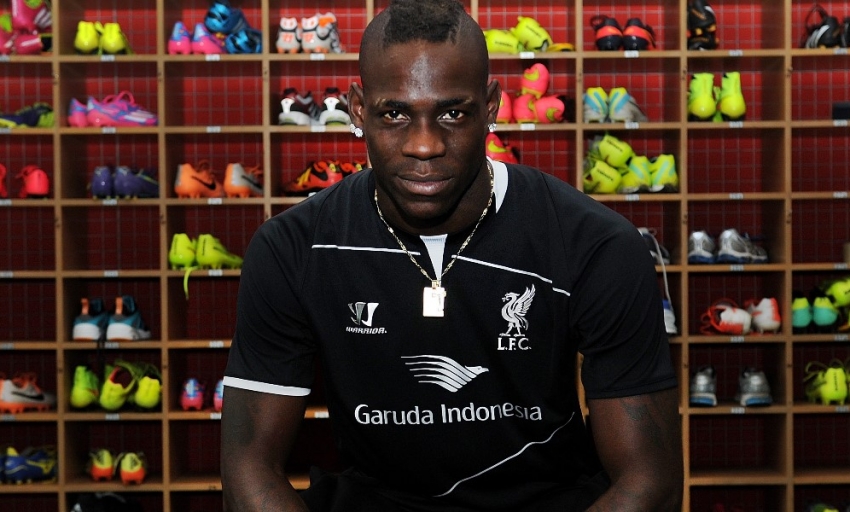 Mario Balotelli admits the chance to be a part of Liverpool's exciting young team was a key factor behind his decision to make the move to Merseyside.

The Italy striker became the club's ninth signing of the summer so far after tying up his move at Melwood on Monday morning, subject to registration.

Moments after putting pen to paper on his deal, Balotelli sat down with Liverpoolfc.com to outline why he's thrilled by the transfer and explained his eagerness to run out at Anfield as a Red.

Scroll down to read a full transcript of our exclusive chat with Liverpool's latest recruit.

Mario, welcome to Liverpool Football Club. How do you feel to have signed for the club?

I'm very happy. We've been talking about coming here and I'm happy to be here.

What attracted you to the challenge here at Liverpool?

Liverpool are one of the best teams here in England. The football is very good here. It's a great team with young players, and that's why I came here.

You've received an incredible reception from the fans here already. How has that made you feel?

No - but when I play with this team [at Anfield], it's going to be nice for sure. To play here for Liverpool excites me, but if you're an opponent it's difficult.

For someone still so young, you have a lot of experience - can you use that to help what is a young team here at Liverpool?

I maybe have a little bit more experience than other players - if I can help them, I'm happy to help them.

You have been away from English football for around 18 months - how do you feel about coming back?

Do you feel English football suits you better?

We know you are going to take the No.45 for Liverpool. Can you explain the significance of that shirt?

When I first played three or four games with Inter Milan, when I was young, I had No.45 because the numbers for young players were from No.36 to No.50. I took No.45 because I was joking that four plus five is nine - and I scored in all four games. It brings me luck and that's why I've always kept No.45.

This deal has moved very quickly over the last few days, so has it sunk in yet that you are a Liverpool player?

No. When I meet the team, start training with them and start my first game, I will realise. For now, I have just seen the city.

How much are you looking forward to meeting your new teammates?

I am going to meet them soon and I'm excited.

Liverpool are in action tonight against your former club, Manchester City - are you going to attend the game?

I'm going to be watching the game. I would love to play but I can't, so I'll support them from the stand.

Finally, what are your ambitions here at Liverpool? What do you hope to achieve?

As much as I can.

Fabio: Balotelli told me about Kop