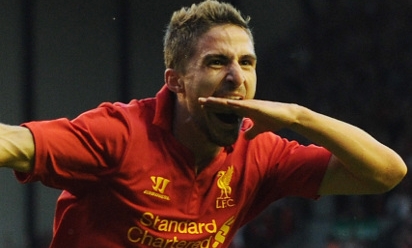 Fabio Borini has revealed how a conversation with Manchester City striker Mario Balotelli helped convince him Liverpool fans were the most passionate in England and that playing at Anfield would be a 'beautiful experience'.

The pair were teammates when Italy reached the final of Euro 2012 in the summer and it was during the same tournament that Borini, aware of the Reds' interest in acquiring his services, sought Balotelli's advice about a switch to England.

And despite having played in front the Anfield crowd just twice since arriving at the Etihad in August 2011, the City man gave the Kop faithful a glowing reference.

"The fans played a big part (in me joining Liverpool)," Borini told FourFourTwo magazine. "When I was with Italy at Euro 2012, I was talking to Balotelli about England, and he told me that Liverpool had the most exciting fans to play in front of.

"He described it as a beautiful experience.

"I became aware that Brendan Rodgers wanted me, and once I got the official request I knew what to do. I spoke with Roma to discuss it and we came to an agreement."

Borini arrived at Anfield with plenty of experience of the English game. At the tender age of 17 he left home to join Chelsea's youth ranks before opting for a loan move to Swansea in 2011.

Carlo Ancelotti handed him his professional debut in 2009 before likening the young forward's style, movement and eye for goal to that of prolific AC Milan forward Filippo Inzaghi.

And Borini, who netted his first goal for the Reds against FC Gomel in the Europa League third round qualifier at anfield, explained to FourFourTwo how these traits will help him settle into life at Liverpool.

"It's wonderful to hear great managers (like Ancelotti) mentioning you alongside such prestigious company," he admitted. "I think Inzaghi won almost everything and scored many, many goals in the Champions League as well as in the national team. It is an honour to be compared to him.

"I am a striker but I played right and left at Roma. I think I have the attributes to fill the (Liverpool) manager's approach. I like to work hard for the team, which is what his tiki-taka style demands.

"I just try to be available and always offer an option. I love scoring goals and hope to get many more wearing the red of Liverpool."