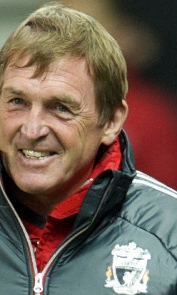 The view from Chelsea

Kenny Dalglish is hoping to maintain a proud record when he takes Liverpool to Stamford Bridge on Sunday.

The Scot has never lost to Chelsea as Liverpool manager in any competition - winning eight and drawing three of the 11 meetings.

Here are the rest of the facts and figures ahead of the big game from club statto Ged Rea.

Head to head (league only):

A win will put Liverpool level on points with Chelsea and a three goal margin of victory will take the Reds above their London rivals.

Last season Liverpool recorded their second Premier League 'double' over Chelsea. The Reds won 2-0 at Anfield thanks to two Fernando Torres goals in the first half and a tremendous rearguard action after the break.

Raul Meireles scored the only goal of the game after 69 minutes of the return in London last February - a game that saw Torres wear a Chelsea shirt for the first time.

The 'double' was only the Reds' second over the Blues in 21 seasons.

All of the Reds' wins at Stamford Bridge in the Premier League era have been by a 1-0 scoreline. Last season's victory followed Xabi Alonso's winner in 2008 and Bruno Cheyrou's in 2004.

Despite a recent improvement, Liverpool have picked up just 13 points out of a possible 57 in league visits to Chelsea.

The Reds have lost 11 of their last 15 league visits to the Bridge and won only three of the last 21 on the ground.

Since the inception of the Premier League Liverpool have won 15 and lost 16 of the 38 meetings.

They have not scored more than once in a league game on this ground in their last 15 visits since a 2-2 draw in December 1995 when Steve McManaman scored both goals.

Pepe Reina was controversially dismissed in the league meeting on this ground in February 2006, while Steven Gerrard also received his marching orders at Stamford Bridge in 2003.

Glen Johnson played 72 times for Chelsea in all competitions from 2003-07, scoring four times.

His first ever league goal was scored on this ground eight years ago this month in a 5-0 win over Newcastle.

Jordan Henderson made his career league debut on this ground in November 2008. His Sunderland team lost 5-0.

However, he was in the Black Cats side that recorded a shock 3-0 win at the Bridge a year ago last weekend.

That is one of only four occasions when Reds players have scored three in a game against Chelsea - the others being James Stewart (1910), Fred Pagnam (1915) and Gordon Hodgson (1930). All were scored at Anfield.

No player has ever scored a hat-trick for Liverpool at Stamford Bridge.

Liverpool's clean sheet last season was only their fourth in the last 16 league visits.

The Reds' biggest victory on this ground came in December 1989 when they won 5-2.

Liverpool's heaviest ever defeat at Stamford Bridge came on the opening day of the 1937-38 season when they lost 6-1.

Only Fabio Aurelio, Lucas and Dirk Kuyt of the current squad have scored for Liverpool at Stamford Bridge - all in the Champions League.

In fact, Aurelio's last Liverpool goal came in the 4-4 European draw at the Bridge in April 2009.

The Reds are looking to record back-to-back league wins at Stamford Bridge for the first time since the 1974-75 season.

Liverpool have won twice in the last three visits and have won four of the last six league meetings home and away. They have lost only two of the last nine.

In the last seven league meetings between the sides only one of the teams has managed to score. The last occasion when both teams scored was in the 1-1 draw at Anfield in August 2007.

Charlie Adam could make his 250th career club appearance in all competitions.

Going into this weekend's fixtures only the United's of Manchester and Newcastle (three each) have conceded fewer league goals on the road than Liverpool's five.

Liverpool are looking for a third successive league clean sheet for the first time since last February, when they kept four in a row. The last in that sequence was the 1-0 win at Chelsea.

The Reds have won four away games in succession in all competitions. The last time they won five was in May 2006 (ultimately they won six in a row) while they bid to register three in a row on the road in the Barclays Premier League for the first time since May 2009.

Chelsea have scored only six times against Liverpool in the last 10 league meetings home and away.

They have lost only six of their last 144 league games at home, the last coming in that 5-3 loss to Arsenal in the last  fixture in front of their home fans.

Chelsea's last hat-trick in the fixture was scored by George Mills in August 1937 at Stamford Bridge.

Didier Drogba has scored 10 goals against Liverpool during his career - the first two for Marseille and eight for the Londoners.

Fernando Torres scored seven goals in eight games against the Londoners. Since moving to Stamford Bridge he has scored five goals in 30 games in league and cup. He scored 13 times in his last 30 Liverpool games.

He has scored more league goals for Liverpool in 2011 than he has for Chelsea - four for the Reds, three for the Londoners.

By comparison Luis Suarez has scored 11 in his 27 games for the Reds, while Andy Carroll has five in 21 appearances.

Raul Meireles scored five goals in 44 appearances for the Reds with his penultimate goal for the club coming on this ground. He has found the net once in his 11 games for Chelsea - scoring his side's first in a 5-0 Champions League win over Genk.

Nicolas Anelka played for the Reds during the 2001-02 season while on loan from Paris St Germain, scoring five times in 22 games in league and cup.

Along with Fernando Torres, David Luiz also made his Chelsea debut in this fixture last season, while Salomon Kalou, John Obi Mikel and Alex have all made their Blues' debuts against Liverpool in recent seasons.

The Blues have kept only two clean sheets in the last 10 games in all competitions and the 1-0 win at Blackburn last time out was their first Premier League shut-out since the opening day.

They have not kept a league clean sheet at Stamford Bridge since beating West Ham 3-0 in April.

Frank Lampard is Chelsea's leading scorer this season with seven goals, six in the league. He has scored five times in his last five league games, including a hat-trick at Bolton last month.

Earlier this season he became only the fifth player in history to make 500 Premier League appearances.

John Terry and Ashley Cole are the only players to play in every Chelsea league game this season.

They have conceded nine goals at home in five league games. They shipped only 13 in 19 league games last season at the Bridge.

In 11 league games they have conceded 15 goals this season - the same number they let in during the whole of Jose Mourinho's first season in charge.