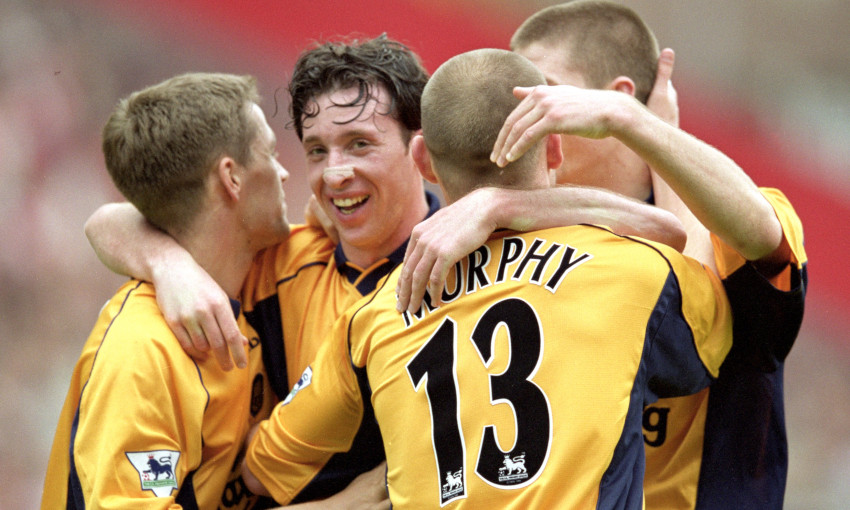 It was, essentially, Liverpool's fourth cup final of the season.

After 62 games of their incomparable 2000-01 campaign, Gerard Houllier’s Reds had safely – if a little too dramatically at times – stored the League Cup, FA Cup and UEFA Cup in the trophy cabinet.

The monumental efforts and flawless attitude of the players and staff over the previous nine gruelling months, featuring a variety of challenges at home and abroad, had ensured this team would take a well-earned place in the club’s history books.

But with one more fixture to play – their last league match at Charlton Athletic, 20 years ago today – there was one more mission to achieve, one more final to win.

“That’s why Gerard Houllier said we’re not celebrating until after the Charlton game, because that was like a cup final,” said then assistant manager Phil Thompson.

“That was massive to us, to come third – because it was only the top three teams [who] got Champions League football. This is huge. [And] we’ve gone there weary because of all the travelling.”

The equation is simple.

Liverpool sit one point ahead of Leeds United and Ipswich Town in the Premiership standings and know victory over Charlton will guarantee a return to the European Cup after 16 years away.

The circumstances are nowhere near as straightforward, however.

Exhausted by the previous week’s experiences – an incredible 2-1 comeback against Arsenal in the Cardiff heat to lift the FA Cup, followed by a 5-4 UEFA Cup final win over Alaves via a Golden Goal in extra-time – the Reds are running on fumes as they journey to The Valley.

There’s the psychological impact of delayed celebrations, too, with those aforementioned triumphs yet to be properly toasted with a vital job still to do on the pitch.

“We won the FA Cup but couldn’t celebrate because we had another final on the Wednesday,” recalled right-back Markus Babbel, an ever-present in the league that season.

“We then won the UEFA Cup but couldn’t celebrate again because we had this important game at Charlton to get Champions League qualification.

“You win some of the biggest trophies in the world and you can’t celebrate.”

And there’s also the spectre of the previous year’s final day.

Houllier’s men knew then, too, that a win against Bradford City could clinch the Champions League ticket that would be revolutionary for the club and its future – only to lose 1-0 and see Leeds take third place.

They could not let that happen again.

“You talk about run-ins when you’re going for the league but this was us going for three trophies [in the final week] really,” detailed Jamie Carragher.

“Because for us qualifying for the Champions League for the first time in the club’s history was almost like a trophy. So we were attacking the games on all three fronts.”

Houllier leans on the depth of his squad for the trip to Charlton, making four changes from the starting XI versus Alaves in Dortmund three days earlier.

The half-time whistle arrives with the score goalless, though the Reds’ nerves are tempered by news from elsewhere; Leeds are drawing with Leicester City, too, while Ipswich are behind at Derby County.

But if the 62 games that have led to this point told us anything, it was that Liverpool are going to find a way.

“We were on the crest of a wave, everyone was confident. We had top players, talented players, but we also had that togetherness and that steel in amongst us,” said Steven Gerrard.

“We had a real strong spine and good players with no ego, who were prepared to sacrifice for each other. That’s the reason why it was such a successful season.

“And then, after winning the three cups we could have really got carried away. But we never, we went to Charlton and really put in a performance there as well to confirm Champions League [qualification] for the season after.

“Obviously Istanbul aside, that was my favourite year by a mile.”

Robbie Fowler unlocks the Charlton backline 10 minutes into the second half, artfully hoisting the ball over his own head and into the net when a Reds corner is half-cleared to him inside the box.

Danny Murphy’s low drive from 20 yards creeps inside the right post six minutes later and the tension melts away; there’s to be no late twist in this most enchanting of tales.

Fowler rasps in his second goal of the afternoon and Michael Owen gets on the scoresheet as well. Liverpool settle on 4-0 and Houllier allows himself a rare outpouring of elation at full-time, fists raised as he embraces his staff.

The job, finally, is done.

“Those last couple of months are my favourite part of my career,” said Carragher. “And the one I look back on certainly most fondly because it was exciting for us all with a lot of young players who hadn’t won anything; a generation of supporters who hadn’t seen Liverpool have too much success, probably having to go back to 1990 for anything really special.

“So you’re talking a decade on and you know what happens then: younger generations start following the club.

“So it was a special, special time and something I think is a little bit forgotten about really, how special that time was and that run-in.”