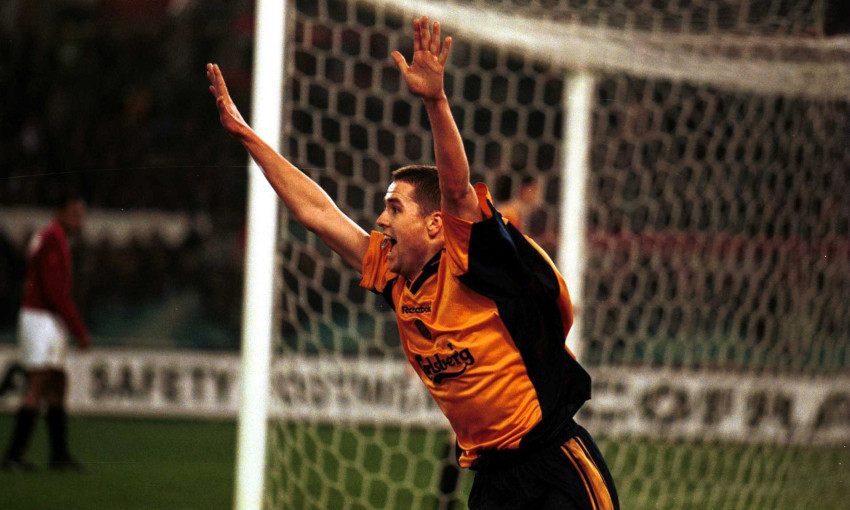 Liverpool's famous UEFA Cup victory over AS Roma 20 years ago today began with a helping hand from some SS Lazio fans.

As the Reds’ team bus crawled through traffic on its way to the Stadio Olimpico for the first leg of their last-16 tie in February 2001, a path was opened up by an escort from local policemen particularly eager to see the visitors arrive without disruption.

But their intervention proved the only assistance Gerard Houllier’s soon-to-be treble heroes would need on a night when they revealed to the whole of Europe their credentials as potential tournament winners with a 2-0 conquest.

Liverpool had travelled to the Italian capital with their four objectives for the season each still firmly in play.

Qualification for the next year’s Champions League – and what would be a maiden appearance since the tournament’s rebrand – was within reach through their league position.

An FA Cup fifth-round tie at home to Manchester City was scheduled for the weekend after their meeting with Roma, while a League Cup final against Birmingham City in Cardiff was 10 days away.

Houllier’s men had eliminated Rapid Bucharest, Slovan Liberec and Olympiacos on their UEFA Cup adventures before the New Year to enter the sharp end of a competition that, back then, was formed of knockout ties only. 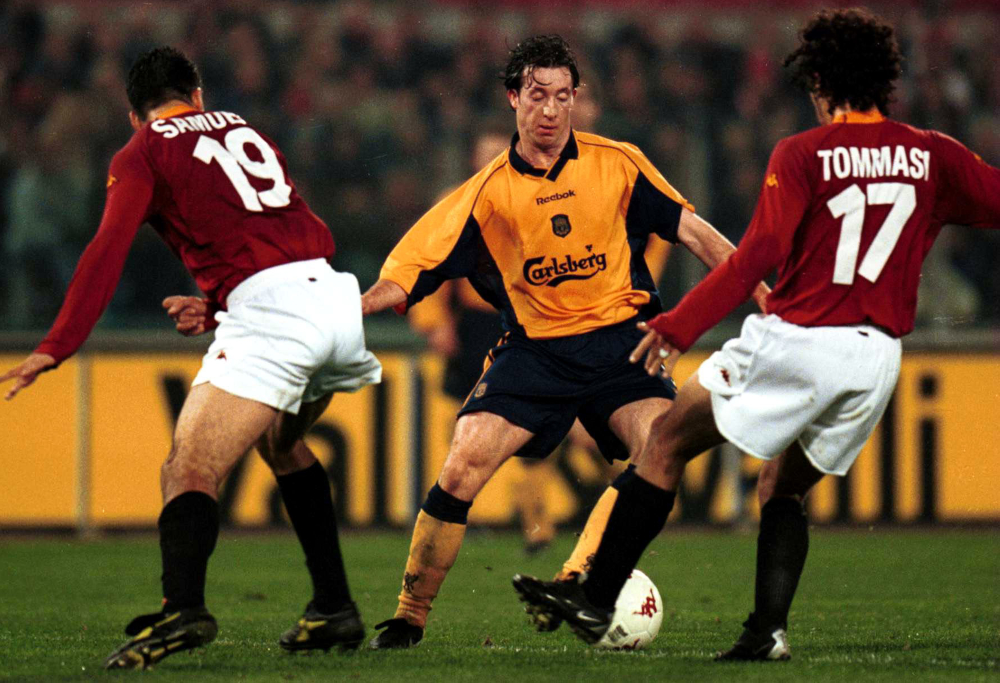 I Giallorossi would end the campaign as Serie A champions without losing a league match at home, boasting a squad overflowing with household names.

“They were quite an astonishing side,” Phil Thompson, the Reds’ assistant manager at the time, told Liverpoolfc.com. “That was a proper performance over there.”

The omens were certainly good for Liverpool, with the Stadio Olimpico the venue for two of the club’s first four European Cup triumphs. Indeed, Joe Fagan’s 1983-84 vintage had achieved the unthinkable by defeating Roma in Rome 17 years earlier.

As Capello juggled the UEFA Cup with the quest for the domestic championship, Gabriel Batistuta was named on the bench in the first leg against the Reds; Francesco Totti had a watching brief in the stands.

For their part, Houllier’s charges were denied the services of Emile Heskey and Steven Gerrard due to injury, and Michael Owen came in for his first start for five weeks.

Liverpool set up in a 4-4-2 that could seamlessly shift to 5-3-2 if needed in defensive situations, Christian Ziege dropping back on the left flank to allow Jamie Carragher to tuck inside next to Stephane Henchoz and Sami Hyypia.

Dietmar Hamann and Gary McAllister patrolled the centre of the pitch, Nick Barmby roved from a nominal wide berth, and Robbie Fowler and Owen led from the front. 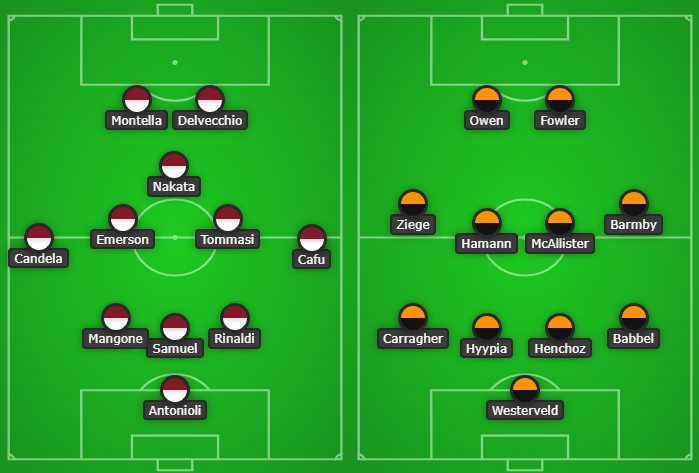 The first half fell somewhat short of the game’s billing as Roma’s efforts to translate their greater share of possession into a mark on the scoresheet repeatedly hit a brick wall in the form of a Reds defence that calmly shielded Sander Westerveld’s goal.

When the hosts did carve through three minutes before half-time, they squandered their chance.

Alessandro Rinaldi was its architect, beating two men at the right corner of the penalty area and sending a cross into the six-yard box, where Marco Delvecchio got in front of Hyypia but headed off target.

In the dugouts, Capello appeared increasingly agitated by the direction of the tie; Houllier, gently smiling, felt his game plan was on track. Both emotions were exacerbated within a minute of the second half’s beginning.

Rinaldi’s wayward pass into the middle from the right touchline of his own half was cut out by Owen, 20 yards from goal with space to exploit. Catnip for the striker who would be crowned European Footballer of the Year 10 months later.

He swiftly carried the ball past Amedeo Mangone and dragged a precise low finish back across Francesco Antonioli into the bottom corner, before leaping into the arms of the Liverpool staff.

The first true blow of the tie was a heavy one, deflating Roma and the home crowd while simultaneously empowering the visitors, who now moved and kept the ball more frequently, with more intent.

Hurried clearances were now careful passes as the confidence delivered by the goal saw the away side add attacking impetus to their defensive resilience.

Substitute Marcos Assuncao stung Westerveld’s palms with a 20-yard drive and on came the cavalry – Batistuta – but Owen’s arms would soon be reaching up to the Eternal City sky in celebration again.

The scorer of Liverpool’s second goal was no surprise, its genesis far more so.

After Ziege’s free-kick from the right-hand side was punched away by Antonioli, he completed an acute one-two with Hyypia at the edge of the box and scampered to the touchline to cross towards the near post off his weaker foot.

Owen’s anticipation outweighed Roma’s awareness and the No.10 beat the goalkeeper to the ball with an awkward, stooping header that angled over the line. 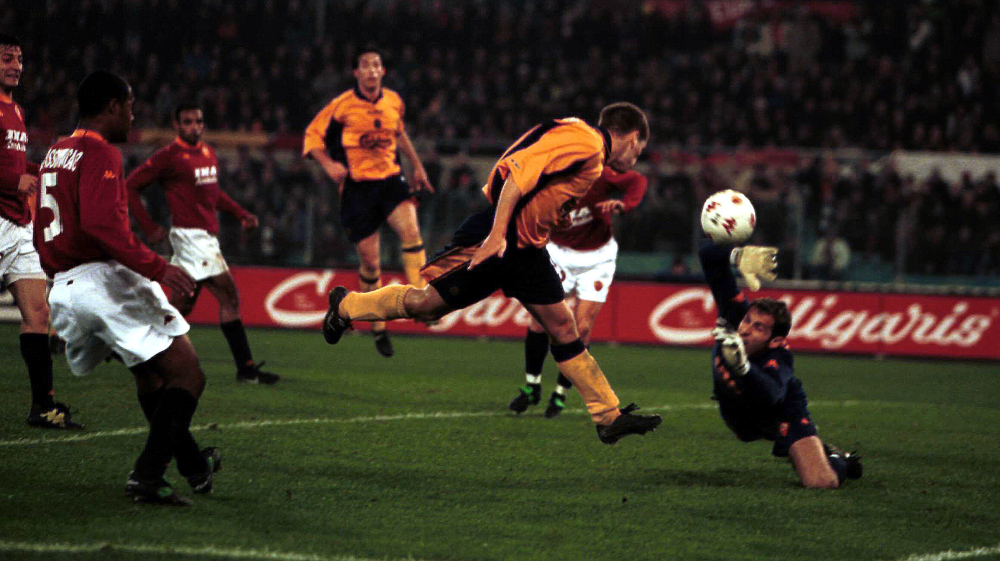 Though already accustomed to shining on the biggest stages, the nature of Owen’s reaction underscored the sense of personal achievement, as well as the significance of the result and the performance.

It was a statement, delivered in iconic surroundings.

“[For] Michael to score two goals, he was becoming that special player that they were having a look to take care of,” said Thompson.

“They had a way of playing – they had three at the back, they had five in midfield with Cafu on the right. They were an absolutely unbelievable team. To come away from there [in front in the tie] was just absolutely incredible.”

The noise inside the Stadio Olimpico was now emanating exclusively from the strip of travelling Reds gathered behind the Liverpool goal.

Barmby might even have made it three in the last minute of normal time, his dribble off the right wing leading him all the way into the area and a one-on-one with Antonioli, whose foot repelled the eventual shot.

It mattered little: the night belonged, emphatically, to Houllier’s team. So too, soon, would the trophy.

“I am very, very proud of them,” said the Frenchman after the final whistle. “To come to the home of the Serie A leaders and win so well, so convincingly, is absolutely wonderful. You can never take anything for granted in football but we are all very content.”