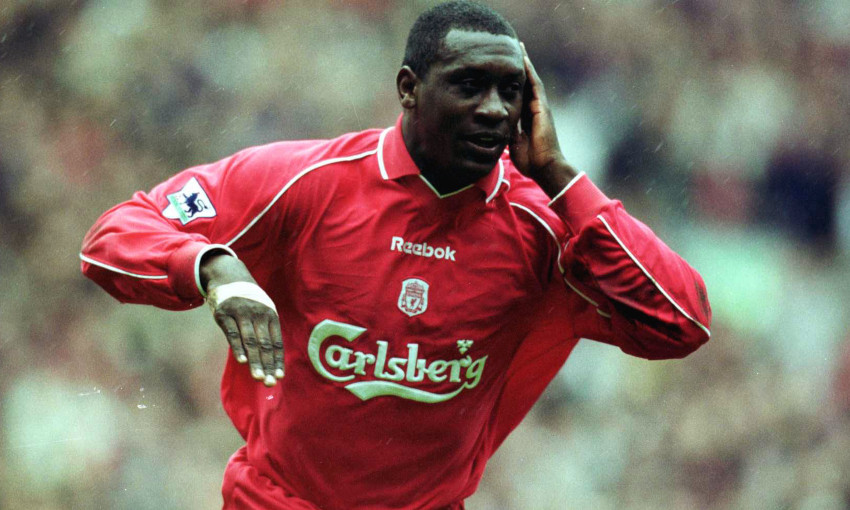 Emile Heskey scored his first Liverpool goal exactly 20 years ago today - and we've marked the occasion by picking out 10 of his very best strikes for the Reds.

Gerard Houllier signed Heskey for a club-record fee from Leicester City in March 2000 and he went on to form a lethal partnership with Michael Owen.

The England forward opened his account for the Reds within weeks of his arrival, during a 3-0 win over Coventry City at Highfield Road.

To celebrate the anniversary, enjoy a look back at 10 of our favourite Heskey goals…

Heskey claimed his first hat-trick in senior football in this 4-0 win at Pride Park, with his second of the game particularly magnificent.

Receiving a lovely pass from Robbie Fowler, he sent an unstoppable, first-time shot from the edge of the penalty area into the roof of the net.

Salif Diao’s cross from the right was chested down by the No.8 with his back to goal, but in an instant he acrobatically guided a thunderous volley home at the Kop end.

After chesting the ball down at the edge of the penalty area, Heskey produced an exquisite lob over future Liverpool goalkeeper Chris Kirkland as the Reds won 4-1.

On the opening day of the 2000-01 season, the Reds needed a breakthrough and Heskey gave them one in memorable style.

Collecting Dietmar Hamann’s pass, the No.8 turned the defender inside out and converted with an explosive, right-footed finish.

On a special night when Houllier returned to the dugout and Liverpool had to win by two clear goals to secure Champions League progress, Heskey delivered.

Danny Murphy’s pinpoint free-kick from the left found the striker, who powered a trademark header into the Kop net to bring up the required 2-0 scoreline.

In a dramatic 3-2 victory at Goodison Park, best known for Gary McAllister’s last-minute winner, it was Heskey who struck the opening goal from a classic breakaway.

An excellent pass by Hamann sent the forward clear and he held off the covering defender and finished expertly.

He surged past two defenders before tucking the ball beyond the reach of Oliver Kahn.

On as a substitute, Heskey sealed a 2-0 win at Elland Road in stoppage time to ensure Liverpool reached the FA Cup fifth round.

Fowler and Nick Barmby combined to tee up a chance at the edge of the box and he sent a suitably thunderous drive past Nigel Martyn.

Jamie Carragher’s pass from the left finds the No.8 with his back to goal outside the area at the Anfield Road end as a thriller nears its conclusion.

Heskey turns his marker and finds the net to secure a 4-3 result that ultimately helped Liverpool clinch a second-place finish in the Premier League.

Liverpool reached the FA Cup final with a 2-1 win over Wycombe Wanderers at Villa Park, but Houllier’s side had to wait until the 78th minute to break the deadlock.

A pinpoint right-wing cross from Steven Gerrard allowed Heskey to power in a header and maintain course for a cup treble.