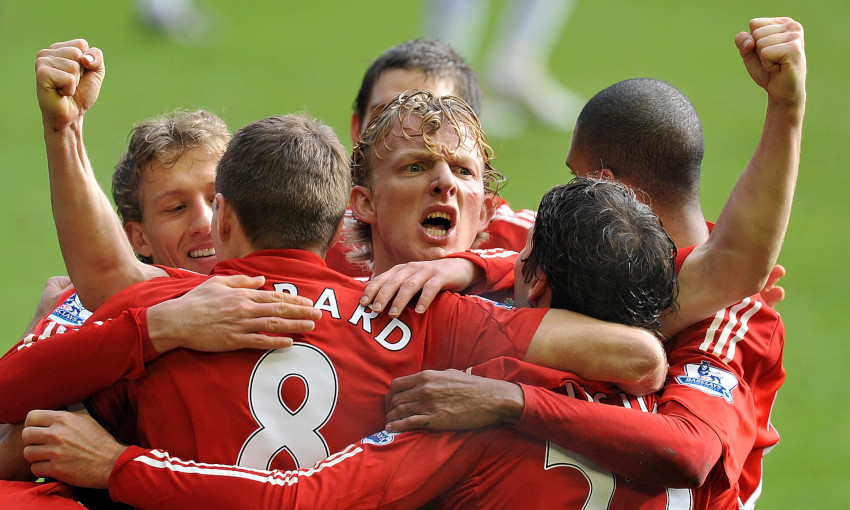 Inside Nike's design process for the 2020-21 LFC away kit

Dirk Kuyt completed his move to Liverpool 14 years ago today and quickly became known as a player who thrived on the big occasion.

The Dutchman spent six seasons at Anfield following his switch from Feyenoord, scoring 71 times in his 285 appearances in all competitions.

Many of those strikes were important, crucially timed or produced in the biggest games – and, in several cases, all three of those things.

To mark the anniversary of Kuyt’s arrival, we have picked out 10 of his most vital and meaningful goal contributions for the Reds… 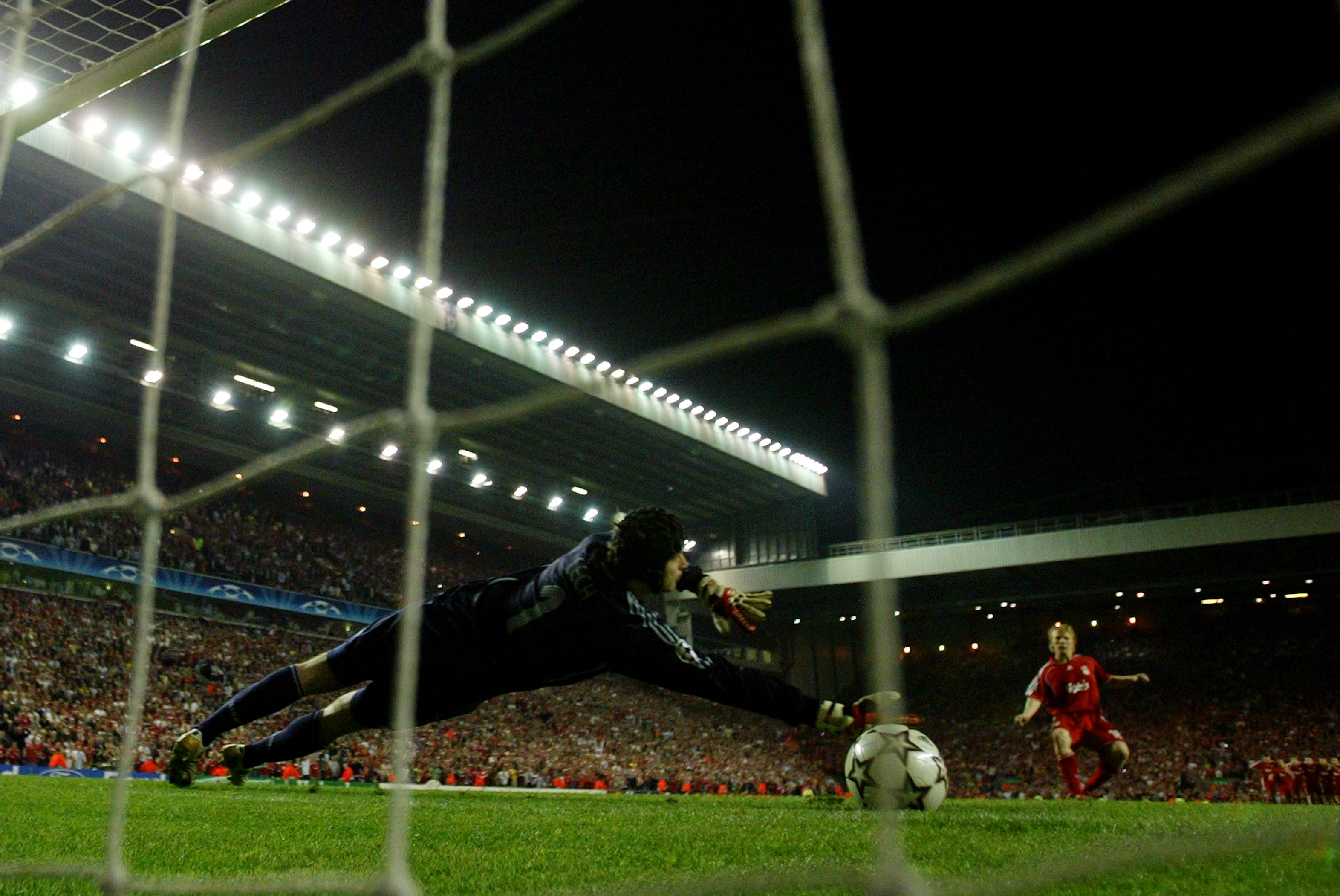 For the second time in three seasons, the Reds and Chelsea played out a nail-biting Champions League semi-final that would be dramatically settled at Anfield.

Trailing 1-0 from the first leg, Liverpool quickly restored parity as a pre-planned free-kick routine opened up space for Daniel Agger to guide a finish into the bottom corner.

Neither side could make a further imprint on the scoresheet across the remainder of the 90 minutes, nor in extra-time, forcing a penalty shootout to decide a finalist.

The hosts led 3-1 after three penalties apiece, presenting fourth man up Kuyt with an opportunity to seal it – and he made no mistake to send his kick past Petr Cech and his team to Athens.

Things were not going to plan for the Reds at the halfway mark of this Merseyside derby at Goodison Park, with Sami Hyypia’s own goal giving the Blues cause for cheer.

But the tide began to turn shortly after the break as the hosts were reduced to 10 men and Kuyt converted a penalty to bring Rafael Benitez’s side back on terms.

That spot-kick proved to be a trial run for a second, decisive strike from 12 yards later in the game – one that would secure immediate derby hero status for the Dutchman.

Phil Neville’s handball on the goalline handed Kuyt and Liverpool the chance to snatch three points to take back across Stanley Park, and he withstood the pressure to squeeze his effort past the reach of Tim Howard.

But Kuyt finally unlocked the Italians at the Kop end, his back-post strike benefiting from a deflection to drift past the grasp of Julio Cesar and change the course of the tie.

The Reds were prone to hiccups in Champions League qualifiers under Benitez, and their biggest scare undoubtedly came against an emerging Standard Liege side.

After a goalless draw in Belgium, the return leg at Anfield also reached 90 minutes without a breakthrough, cranking up the tension into extra-time.

Penalties loomed ever closer as the two teams toiled in an absorbing encounter, but yet again Kuyt popped up in the right place at just the right time.

Ryan Babel’s deep cross from the left flank reached his compatriot at the far post and Kuyt nudged the ball home to ensure Liverpool entered the group stage.

Liverpool were staring at a two-goal deficit 45 minutes into this Premier League showdown and needed something special to maintain their unbeaten start to the campaign.

Benitez’s half-time instructions clearly did the trick as a Fernando Torres double hauled the visitors back on level terms and created a platform for a grandstand finish.

Once again, Kuyt provided it. 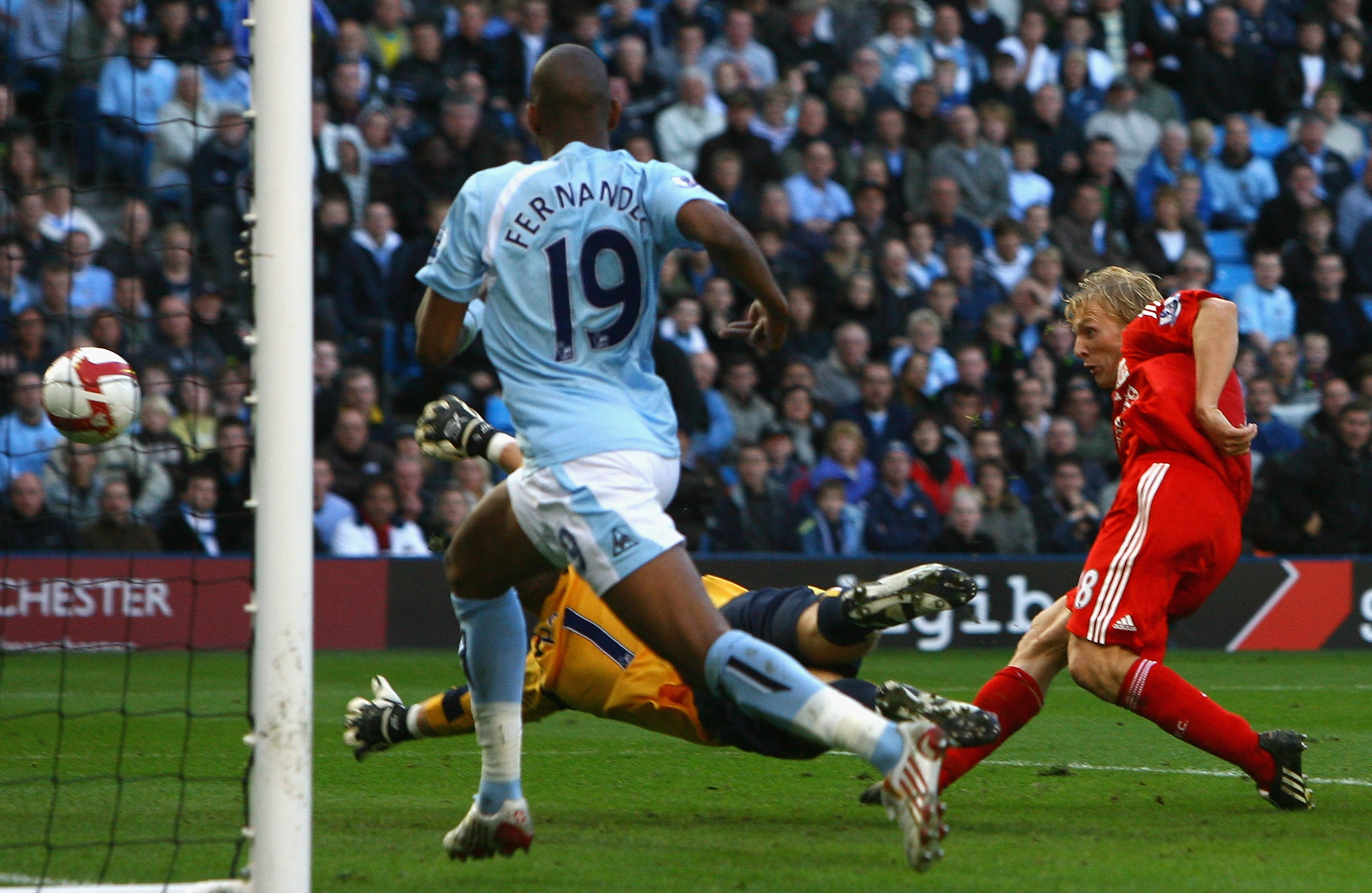 When a loose ball ran his way in stoppage time, he slammed it into the roof of the net to complete a memorable comeback for a Reds side that would go on to end the season in second place.

The Reds made the short journey to their neighbours having won just one of their previous six Premier League games in what would be Benitez’s final campaign at the helm.

But they edged in front on 12 minutes at Goodison Park as a long-range hit by Javier Mascherano struck Joseph Yobo and found the back of the net.

And they held onto that lead until Kuyt ensured them three points 10 minutes from time, pouncing on a parry from Howard and knee-sliding to the Liverpool fans celebrating wildly to his left. 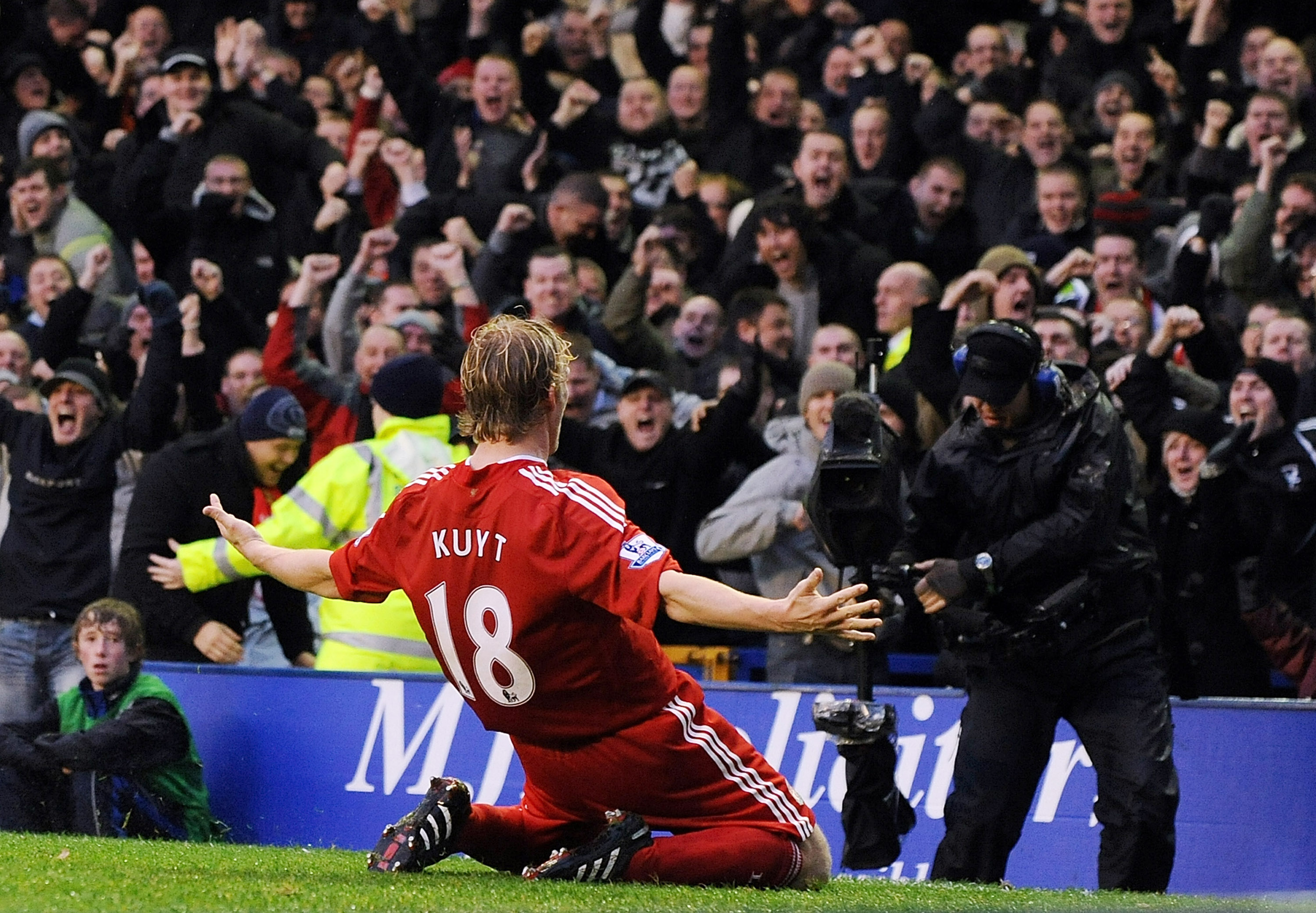 And the Dutchman completed a sweet double that season by bagging the only goal of the reverse meeting between the Merseyside rivals at Anfield.

The odds were against them when Sotirios Kyrgiakos was dismissed just after the half-hour but they dug in and Kuyt delivered on derby day yet again.

Gerrard’s corner kick into a crowded penalty area was artfully nodded in by the Netherlands international and it was enough for all three points.

It was Kuyt’s 50th goal for the club in all competitions.

It does not get much more vital than putting three goals past your fierce rivals.

And Kuyt added that particular individual achievement to his collection in this Premier League victory at Anfield, becoming the first Liverpool player since 1990 – and only the sixth in history – to net a hat-trick against Manchester United.

Each effort was that of a pure poacher, with the pick of the bunch his first – a simple tap-in on the goalline after Luis Suarez’s mesmerising dribble had disorientated the opposition defence.

There are two minutes to go in this FA Cup fourth-round tie when Andy Carroll flicks Pepe Reina’s long goal kick into Kuyt’s run inside the right channel.

The No.18 lets the ball bounce across his body towards his favoured foot as he spots an opportunity to win the game for Liverpool at the Kop end.

And he quite simply rifles it, low and hard past David de Gea. Glorious. 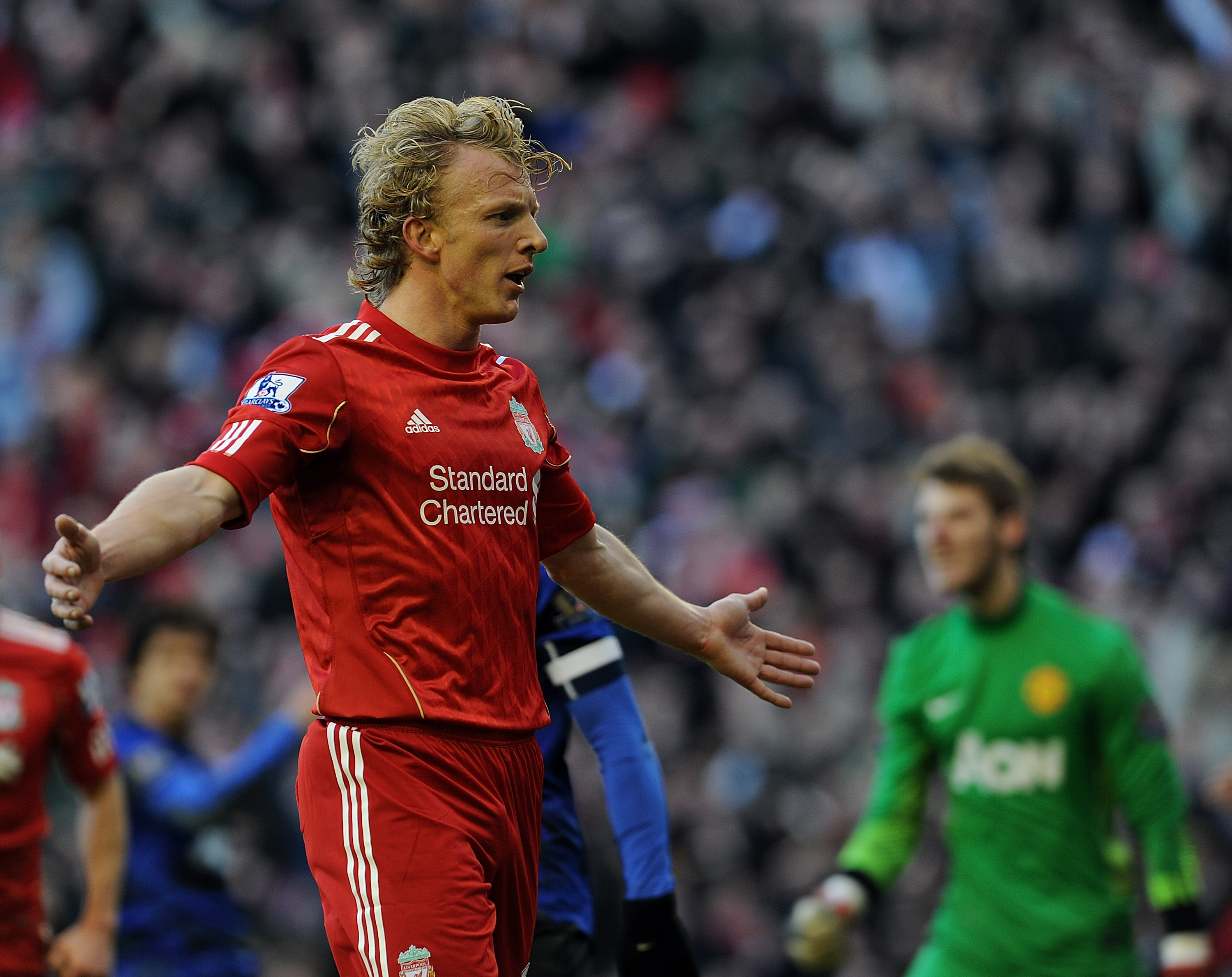 Kuyt’s penultimate goal for the Reds came in the 2012 Carling Cup final as Sir Kenny Dalglish’s side eventually overcame Cardiff City at Wembley.

Sent on in the 103rd minute with the score 1-1, the forward required just five minutes to blast in from the edge of the area and register yet another important, and timely, strike.

Cardiff levelled before the conclusion of extra-time, but Liverpool prevailed in the penalty shootout – Kuyt, of course, on target with his spot-kick.