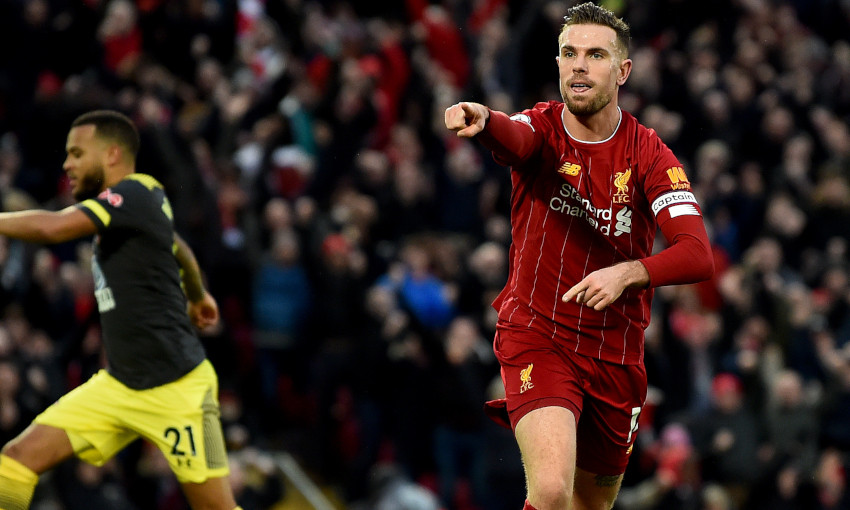 Mohamed Salah netted twice with Alex Oxlade-Chamberlain and Jordan Henderson also on the mark as Liverpool beat Southampton 4-0 at Anfield on Saturday.

The Reds moved 22 points clear at the top of the table and also equalled a Premier League record with their 20th consecutive home victory.

Liverpool's breakthrough eventually came just two minutes into the second period when Oxlade-Chamberlain fired low from edge of the box to leave Alex McCarthy rooted. It was the midfielder's seventh of an increasingly productive campaign in front of goal and his second of the week after he netted against West Ham on Wednesday night. Those sort of figures outline what he brings to the team in the midfield. Once more Henderson was full of energy and industry, snapping into tackles and passing it around with an impressively varied range that is rarely discussed when his virtues are the topic of conversation. This was another performance that typified everything good and great about the Reds skipper this campaign. The England midfielder is in the form of his career and those calls to make him Player of the Year are only continuing to grow. The ovation he received when he made way for Adam Lallana late on spoke volumes about how much he is appreciated by the Anfield faithful.

Liverpool opened up the biggest lead by any team at the end of a day in English top-flight history with an emphatic victory over Southampton. The Reds extended their advantage in the Premier League to 22 points over second-placed Manchester City, who face Tottenham on Sunday, with a 4-0 win against Southampton at Anfield. They have also equalled City's record of 20 consecutive Premier League wins at home and only Bill Shankly's Liverpool team in 1972 had a longer winning streak on home soil in English top-flight history. It is only February 1 but Liverpool are unbeaten in 42 games, have conceded just one league goal in their last 10 matches and have 73 points from 25 games - a top-flight record.

Liverpool could have had no complaints had they gone in at half-time behind. That they didn’t owed much to their remarkable goalkeeper Alisson Becker, who seems to put in match-winning performances even in comfortable wins. Henderson dragged his teammates up to the required level in the second half. Took his goal brilliantly and what a ball to set up the second for Salah. The Egyptian ran Southampton ragged in the second. The confidence he is playing with at the moment was summed up by the impudent finish that brought his first goal and he certainly deserved his second.