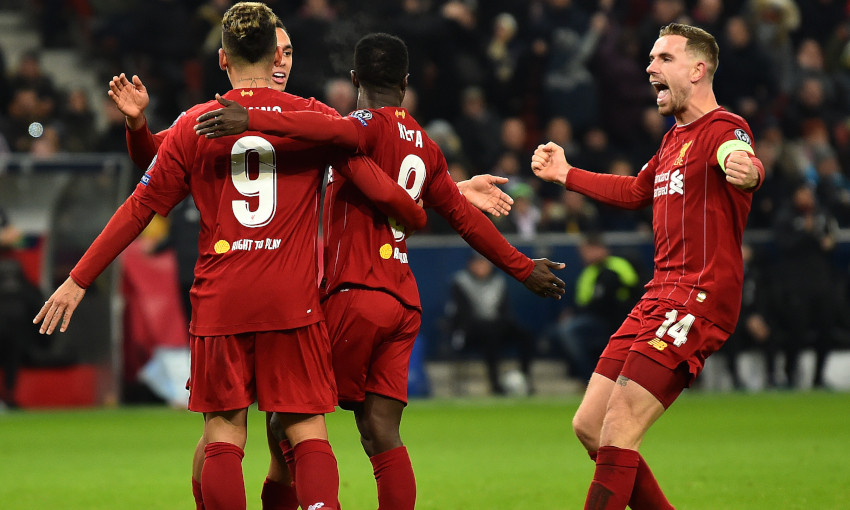 LFC's Goal of the Decade: Vote for 2014's contender now

Liverpool secured qualification for the knockout stages of the Champions League in style after a 2-0 win away at Salzburg on Tuesday night.

Naby Keita headed the opening goal before a magnificent effort from Mohamed Salah completed the scoring.

You didn't doubt them, did you? Liverpool march on, their grip on the Champions League remains. A little close for comfort, yes. Even in the freezing Austrian winter, the Reds were made to sweat. But on a night when they didn't dare lose, they didn't. Their 2-0 victory over a lively, impressive Salzburg side sends the European champions through to the knockout stages, and as Group E winners too. Panic over. Never doubt this team. This was a big night for Keita, who marked his second successive start with a second successive goal. The Guinean won two league titles at Salzburg, but he was in no mood to be kind to his former employers. His header, from Sadio Mane's pinpoint delivery, took all of the wind out of the home team's sails. It was reward for a confident, enterprising performance from Keita, who is coming to prominence just when Liverpool need him. This was a high-stakes game, and a high-class display from the 24-year-old. It was his best performance in a red shirt, you'd have to say.

European Cup No.7 remains in reach. No one across the continent will want Liverpool in that draw. Absolutely none of them. What is it about Klopp's Liverpool and this competition? Finalists for the last two years and reigning, defending champions of Europe, yet somehow, for the third season running, their passage to the knockout stages was only confirmed at the final group-stage blast of a referee's whistle. The game started at a ferocious pace and Liverpool had Virgil van Dijk and Alisson to thank, twice apiece, for keeping it goalless. However, the big moment would arrive for the ex-Salzburg star on 57 minutes when Mane scampered clear and beat Stankovic to it before crossing. Keita arrived on cue to nod home and give the biggest indication yet that now, finally, is his time at Liverpool. Starting him here was a big show of faith from Klopp and the 24-year-old repaid him with an excellent performance and crucial goal.

It took just two minutes on Tuesday evening for the rapid, well-coached hosts to demonstrate how arduous Liverpool's task would be and for Virgil van Dijk to showcase why he is the best defender in the world, making crucial interventions to deny Erling Haaland and Hwang Hee-Chan. It took even less time for the Premier League leaders to remind their opponents and the rest of Europe why they are the continent's supreme side. With 57 minutes on the clock, Keita headed in Mane's cross after a fine attack that featured both fullbacks to finally break the deadlock. A minute later, Salah, who had been swerving scoring sitters all night, served up a phenomenal finish with his weaker foot from a preposterous angle to take the game and the tournament away from Salzburg. It was a prime Liverpool performance – nullifying dangerous opponents before knocking them out – much to the chagrin of the rest of the teams still in the Champions League.

With the pressure on and qualification for the knockout stage of the Champions League in the balance, Liverpool delivered a performance befitting European champions. The dream of a third consecutive final appearance and return to Istanbul remains alive for Jürgen Klopp's team after overcoming Salzburg in some style. They made it look easy in the end. It was anything but. Liverpool finished top of Group E with a victory built on the composure and experience of champions, plus the brilliant execution of their front line. The champions of Austria played their part in an enthralling finale but from the moment Sadio Mané set up Naby Keïta – both former Salzburg players – for the opening goal the visitors assumed complete control. Liverpool have reached the final of every European competition they have played under Klopp. They have never lost a two-legged knockout tie in Europe under him either. The unbeaten Premier League leaders will head for the Club World Cup in Qatar next week confident of maintaining that remarkable sequence in the new year.

A quick guide to Salzburg for LFC fans

'Playing at Anfield will be a dream come true for me'