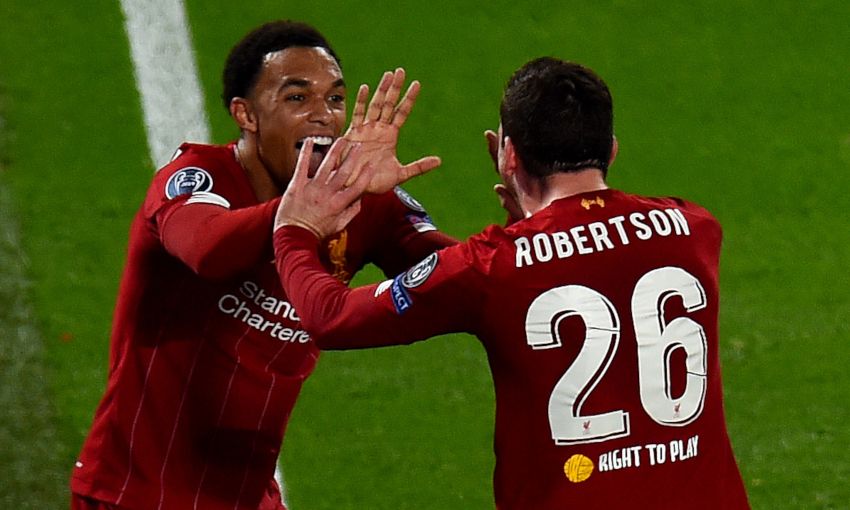 Mohamed Salah netted twice, with Sadio Mane and Andy Robertson also on the mark, as Liverpool beat Salzburg 4-3 in a thrilling Champions League game at Anfield on Wednesday night.

On what was a proud occasion for the Reds playing in their 100th European Cup game on home soil, Salah produced the vital winning goal in front of the Kop.

Thankfully for Kopites, even the bad days seem to end happily nowadays. The Egyptian had put Liverpool into cruise control at 3-0, and he stepped up when they needed him at 3-3, smashing home Roberto Firmino’s flicked header in front of the Kop to get his side out of jail. His sixth goal of the campaign was met with relief as much as anything else. That’s 12 goals in 13 Champions League appearances at Anfield for Salah. Since he arrived in 2017, only Lionel Messi and Robert Lewandowski have scored more in all competitions across Europe’s top five leagues. Salah keeps special company these days. For most of the first half Liverpool were outstanding. They played with verve and a healthy arrogance, scored three wonderful goals and looked every inch the champions of Europe. Anfield purred at their excellence.

On Saturday at Sheffield United, the Reds were floundering going forward before a switch to 4-2-3-1 helped see them over the line. This time, it was the defence that ultimately benefited, Milner joining the over-worked Fabinho at the base of the midfield and providing extra cover for a teetering backline. At the other end, Salah converted Firmino's touch, and Anfield breathed a sigh of relief. Of course, such tactical flexibility is nothing new, the Reds having employed the tactic regularly during the autumn of last season. It meant the players knew what to do. And it allowed them to dig themselves out of a Champions League-sized hole largely of their own making. Another remarkable Anfield European night, then. Here's to another 100.

If you had pulled Klopp to one side on his first day at Anfield and asked him to describe what one of his team’s goals would ideally look like, he might have described Liverpool’s second here. Just five passes, three of them first-time, were played between defender Andy Robertson picking up the ball just inside the Salzburg half and then finishing the move off from the No.9 position. It was a fine example - arguably the best of the manager’s reign thus far, in fact - of the sort of breathtaking, electric football he was brought here to provide. Almost four years since his arrival on Merseyside, Klopp is presiding over a team that is as close to a perfect realisation of his attacking philosophy as you’re likely to see. And it is absolutely thrilling to watch.

It was a moment, gloriously surreal, which perfectly encapsulated the joy of this majestic Liverpool team right now…and the insanity of this astonishing game. Half an hour in, Robertson, finding himself at right back, glanced up under pressure on the edge of his own penalty area, and swept a 50 yard ball for Trent Alexander-Arnold to gallop onto….from the left wing. Quite what either was doing there no one could quite fathom. But then, no one had any real answers to what had transpired on this remarkable Anfield evening. It is hard to imagine a more creative pair of full-backs in the history of the Premier League…and they must surely be the best pairing in European football right now. It was frantic and fun, barmy and brilliant. In the end though, Robertson and Alexander-Arnold’s class was just enough, as Liverpool made some sense of the senseless. If Salzburg gave us so many memories of this night, then the overriding one was of Liverpool’s two joyous game-changers.