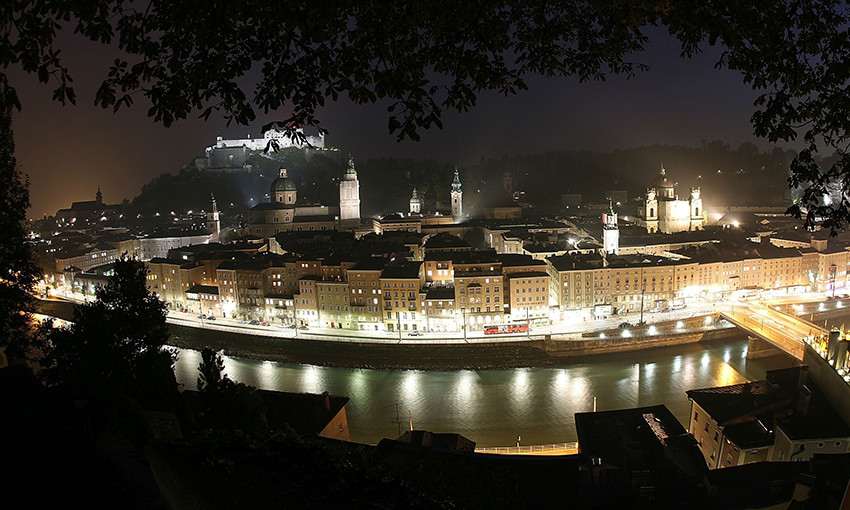 The view from Bournemouth: 'Set-pieces will be crucial'

Liverpool journey to Austria for Tuesday's Champions League group decider against Salzburg - and we've put together this handy guide for all you Reds following the team to the historic city.

The birthplace of Wolfgang Amadeus Mozart, renowned for its Baroque architecture and scenic Alpine surroundings, Salzburg is also a university city stacked with plenty of bars and nightlife.

Small enough to get around on foot and with the famous Christmas markets in full swing during December, there's plenty for LFC fans to take in before and after the 5.55pm GMT kick-off at Red Bull Arena. 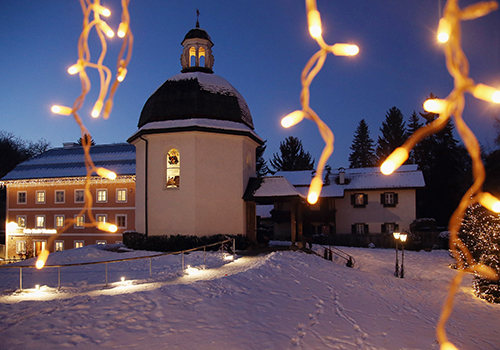 One of the easiest ways to travel the four kilometres from Salzburg W.A. Mozart Airport to the city centre is by bus - the No.10 and No.2 run every 10/20 mins from the airport to downtown Salzburg and take approximately 15 minutes to reach the main square of Residenzplatz and its environs in the heart of Salzburg.

A single adult ticket costs €2.50 and can be bought from the 'Newscorner' Kiosk in Terminal 1, at the machine at the bus stop, or directly from the bus driver. Taxis are also widely available, with a 15-minute trip to the city centre costing around €15.00.

Alternatively, you can pick up a 24hr Salzburg Card for €26,00, which entitles the bearer to free public transport and free admission to all the city's tourist attractions and museums - useful if you plan to do some serious sightseeing. 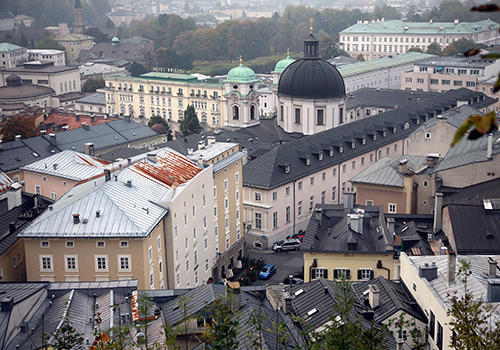 You may be pleased to discover that Salzburg has been described as 'Austria's capital of beer'. With 11 breweries in and around the city it doesn't matter if you are after a traditional beer, modern ale or a craft brew, you are well catered for.

The StieglKeller - located on Festungsgasse, below the city's looming Hohensalzburg Fortress - offers a taste of Austria's beer garden culture and has a capacity for 1000 people. Its garden looks out over the roof tops of Salzburg's World Heritage-listed Old Town and claims to be one of the best places to watch the sun set over the city too.

Stiegl is Austria’s most wide-spread bier and their flagship StieglKeller offers all the beers on tap. However, we are told by those in the know that Trumer, which is also brewed in Salzburg, is also well worth taste.

There are plenty of pubs, traditional inns and bars dotted around the city where you can get both. A typical 0.5 litre beer costs roughly around €4.20. 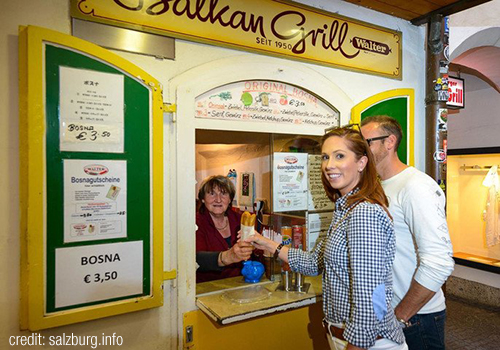 For sustenance, why not try the two dishes Salzburg is most famous for: Bosna and Salzburger Nockerl.

Bosna is a grilled Bratwurst inside a hot-dog-like bun with onions, a secret blend of spices and a curry-ketchup sauce on top. It's available from stands all around the city but the Balkan Grill located in the passage between Getreidegasse and the Universitaetsplatz (more on that later) is said to be one of the best.

Salzburger Nockerl is a dessert made with egg, flour, sugar, and vanilla. The souffle-like sweet dumplings are usually served warm with powdered sugar and raspberry sauce. It is purportedly so filling it is sometimes eaten as a main rather than desert and is served in most Austrian restaurants around the city.

With the Salzburg Christmas markets also in full flow, they are certainly worth a visit too, to try the mulled wine - the city's signature drink during the festive season - or taste other local dishes on offer. The biggest one is the Salzburg Christkindlmarkt at the Dom and Residenzplatz - the historic centre of Salzburg. 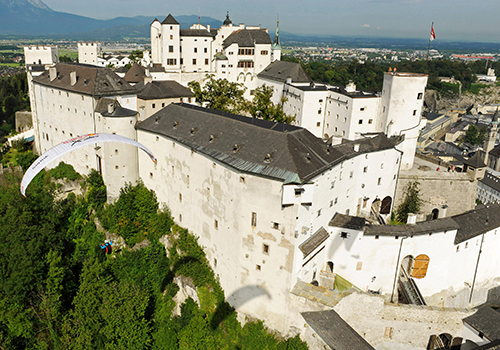 The Hohensalzburg Fortress on the crest of the Festungsberg mountain has loomed large over the city of Salzburg in one shape or form since archbishop Gebhard had it built in 1077 and it still offers the best panoramic views out over the beautiful city, its Baroque historical district and the surrounding Alps.

At 199 meters above the old town, you can't really miss it, and like most places in the Austrian municipality you can get there on foot. But if trekking up to a mountaintop isn't your thing, then the Fortress Funicular service, which runs from Festungsgasse in the heart of the Salzburg historic district, will get you up there in just 54 seconds.

Once at the top, Salzburg's most popular sightseeing attraction houses four museums (the Fortress Museum, the Marionette Museum, the Altes Zeughaus and the Museum of the Rainer Regiment) the spectacular Princes' Chambers and a Magical Theatre in its eight-acre grounds.

Open from 9.30am to 5pm in December, ticket prices vary but a basic package including a ride up and down on the funicular is €12.90 for an adult.

Alternatively, head up the Mönchsberg mountain opposite the Festungsberg, its forest and meadow walks are popular with the locals and the plateau offers excellent views back across the city and towards the Hohensalzburg Fortress.

Now, somehow, we have got this far without referring to Salzburg by its unofficial other name: the 'City of Mozart'.

The world-renowned classical composer and Salzburg's most celebrated son was born in 1756 in the 'Hagenauer Haus' on Getreidegasse, which is now one of the most visited museums in the whole of Austria. A pilgrimage site for Mozart fans, it's also described as 'absolute must for every Salzburg visitor'.

Mozart and his family lived in the Hagenauer Haus for 26 years, before moving to the 'Mozart Residence' on Makartplatz, which, you guessed it, is also now a dedicated exhibition to composer, who eventually moved Vienna 1781.

An adult ticket to Mozart's birthplace costs €11.00 and a combined ticket which also includes the later residence is €18.00.

Can you go to Salzburg and not do something Mozart-related? 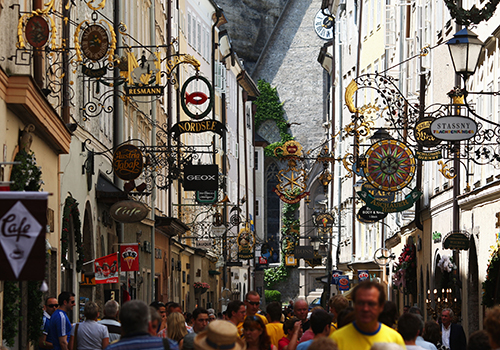 Well, as the 'Hagenauer Haus' stands on the city's famous Getreidegasse in the vibrant heart of Salzburg’s Old City you will surely at least pass it as you amble down a street packed with shops, boutiques, bars, restaurants and Salzburg's curious 'through-houses' - narrow passage ways paved with Untersberg marble and embellished with vaulted roofs that serve as shortcuts to other parts of the city.

One of these thoroughfares is particularly quirky. 'Treasure Through-House' at No.3 Getreidegasse includes the rib of a whale hanging from the roof adorned with a dried-out shark that dates to the 14th century.

As a guide, the even-numbered Through-Houses provide short-cuts to the Griesviertel district of downtown on the River Salzach, while the odd-numbered passageway take you to Universitatsplatz.

But if all that exploring is too much, then why not just take in one of the traditional Austrian inns on the Getreidegasse instead. 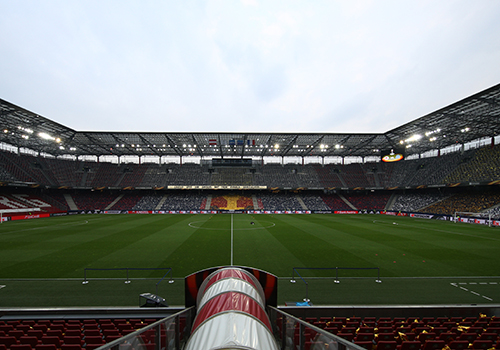 The bus takes about 30 minutes to get to the stadium and your match ticket will give you free travel on public transport starting six hours before kick-off. Alternatively, you can use the matchday special shuttle service, running on a similar route.

Salzburg left their old Stadion Lehen to move to Stadion Salzburg when it opened in 2003. It was expanded from a capacity of 18,250 to over 30,000 ahead of the 2008 UEFA European Championships, when it hosted three group stage matches.

As with many newly constructed grounds, the stadium is located on an industrial/retail park, so, aside from the usual matchday kiosk offerings, the best food and drink options are back in the city.

The stadium also houses the Austrian champions' trophy and Austrian Cup won by Salzburg last season, but unfortunately there are no tours until Saturday.

The media on Salzburg 0-2 Liverpool: 'Never doubt this team'

'Playing at Anfield will be a dream come true for me'