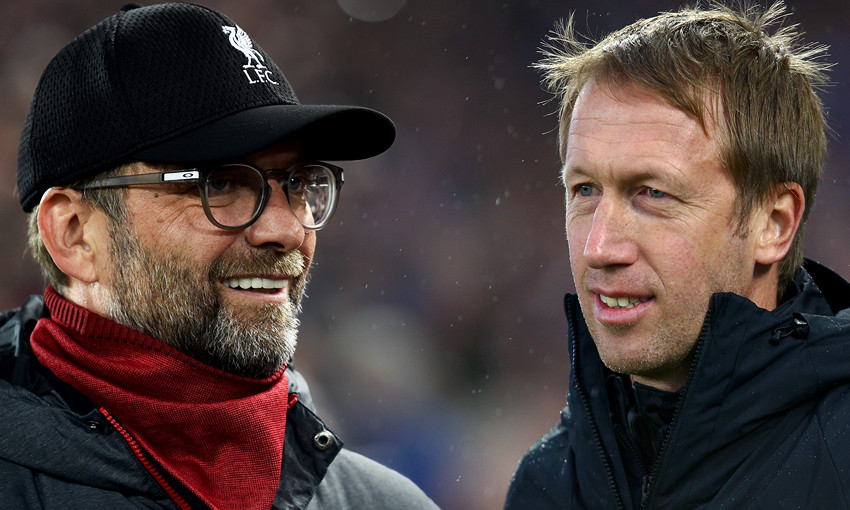 Liverpool return their attention to Premier League matters on Saturday as Brighton and Hove Albion arrive at Anfield.

The Reds were held to a 1-1 draw by Napoli in the Champions League in midweek and Jürgen Klopp's men will seek to regain momentum with a fifth win on the bounce in the top flight.

The unbeaten Premier League leaders are eight points clear at the top of the table and face a Seagulls side coming off the back of successive defeats by Manchester United and Leicester City.

Prior to that, however, Graham Potter's team had enjoyed a good run of form, winning three out of four matches.

So, what can we expect from Brighton at Anfield? We spoke to WeAreBrighton.com editor Scott McCarthy (@WeAreBrighton) to find out...

With a third of the season gone, what's your assessment of Brighton's progress under new boss Graham Potter?

It depends on how you look at it really. Points-wise, we're on 15 from 13 games, which is the same as this stage last year and one worse off than in 2017-18. That only tells half the story, though, as you could make a real case that we should have at least eight more on the board.

VAR reared its head in our 1-1 draw against West Ham United. Florin Andone managed to get himself sent off after 30 minutes of our next game against Southampton; even so, we absolutely battered the Saints but ultimately lost 2-0 because of having to play for so long short-handed. We gave away avoidable last-minute goals to draw 1-1 at Burnley and lose 2-1 at Aston Villa, still trying to go on the attack in situations where the trenches should have been manned for the final 120 seconds. And we played for an hour with 10 men again at Villa Park after Aaron Mooy got booked twice in five minutes.

With a little more luck, improved game management and no stupid dismissals, we could quite feasibly be fifth in the table right now. Look at it like that and we're progressing quite nicely under Potter.

What are the expectations for the season? Have they changed since the start of the campaign?

I don't think anybody really knew what to expect at the start of the campaign. Despire the dire second half of last season, sacking manager Chris Hughton still represented a gamble – one which seemed like it would go one of two ways.

Right now, we look on course to survive playing better football than last year, which should fulfil most Albion fans' expectations – and it certainly seems to have fulfilled the club's, given that they have already extended Potter's contract by two years. 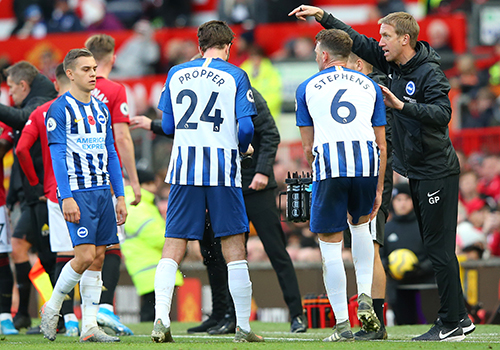 Have there been any changes or evolution to Brighton's tactics?

The change in playing style and approach has been astonishing really, a 3-4-3 or a 4-2-2-2 in which we're setting out to win every game rather than praying that we don't get beaten. The biggest difference, though, has been the bravery with which Potter has taken to the task. That's true of his bold tactics but also of his team selections.

Our U23s were riding high in Premier League 2 last season and Aaron Connolly was named as the section's Player of the Year. Potter has not only promoted Connolly and Steve Alzate into the senior set-up, but they've both become full internationals for the Republic of Ireland and Colombia respectively.

How is confidence heading into Saturday's game?

We lost 2-0 at home to Leicester City on Saturday and it was one of those occasions where you hold your hands up and say we were beaten by a far better team. Liverpool away is an even tougher test – it's basically a free hit.

When that's the case, confidence doesn't really matter. Hopefully we head north, give you a bit of a game and don't take too much of a pasting before facing Arsenal on Thursday night. We are yet to win away at one of the big six, and there's a feeling that could change at the Emirates next week. That's where we'll go with confidence. 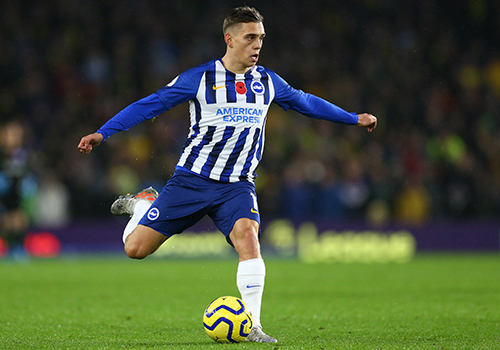 Who is the star player under the new regime?

Leandro Trossard has been outstanding when fit, almost single-handedly winning us our recent games with Everton and Norwich City despite only coming off the bench for the final half-hour in each. Lewis Dunk, though, is the main man.

The centre-back has inherited the captaincy from Bruno and is being allowed to show just what a fantastic footballer he is under Potter, who wants Dunk to play out from the back. He's already claimed two wonderful assists for Neal Maupay's goal away at Watford and one of Connolly's against Spurs with passes that have split the opposition defence from 40 yards away.

And which player has surprised you most so far this season?

An odd choice perhaps, but Pascal Gross. There were doubts about where Gross would fit into Potter's system, given that his best position is as a No.10 and we began the season without the need for one in a 3-4-3. The change to 4-2-2-2 for the 3-0 win over Spurs at the start of October thrust him back into the side, though, and he's been our most creative player ever since. We haven't won a game this season in which Gross hasn't started, which tells you everything.

How do you expect the Seagulls to line up?

We've had line-ups which have included four central midfielders and four centre-backs already this season, so trying to predict the line-up is a fool’s game.

If I had to guess, I'd probably go for a 3-4-3 featuring Maty Ryan in goal, a back three of Dunk, Adam Webster and Dan Burn; Martin Montoya on the right, Solly March on the left with Davy Propper and Dale Stephens in the middle and a front three of Maupay, Connolly and Trossard. 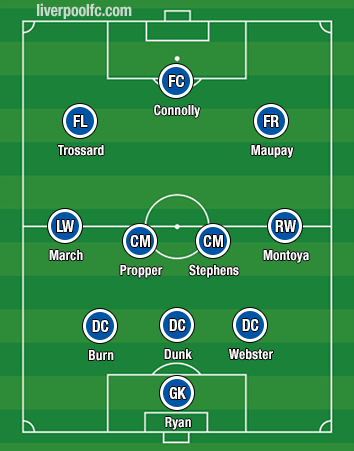 Where do you think the Seagulls' main threat will come from?

When we went to Manchester City in August, we were beaten 4-0 but still managed to have City worried on occasions. That was largely through Trossard, so hopefully he can give the Liverpool back four something to think about.

Absolutely outstanding. Thirty-seven points out of a possible 39 says it all. It's probably not what you want to hear, but it would take a monumental blunder for the Premier League title not to wing its way to Anfield come the end of the campaign. I don't think many people appreciate just what a good era this is with outstanding City and Liverpool sides battling for the title over the past two seasons.