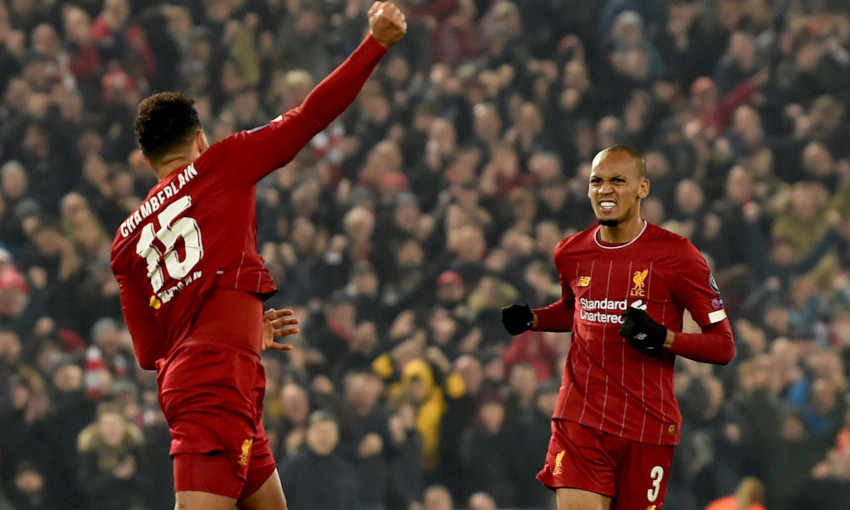 Alex Oxlade-Chamberlain netted the winner in front of the Kop as Liverpool beat Genk 2-1 at Anfield in the Champions League on Tuesday night.

After Georginio Wijnaldum's opener had been cancelled out, the Reds' No.15 netted a fine strike after a nice link-up with Mohamed Salah to send the European champions top of Group E.

These three points will ultimately go a long way towards ensuring another crack at Ol' Big Ears in 2020 as the six-time winners crept ever closer towards qualification to the last 16. Napoli's 1-1 draw with Red Bull Salzburg in Naples now means Klopp's defending champions move to the summit of their group with the Italians to come next at home. Victory against Carlo Ancelotti's men on November 27 and the Reds will secure their passage in time to rest key names during a hectic December. For Oxlade-Chamberlain, it was an unfamiliar role out in the front three, but with three goals in his last two starts, prior to kick-off - including a brilliant brace against Genk last month - it was a great opportunity to build on those eye-catching displays. It was a chance he once more grasped with both hands as his match-winning efforts secured a big win in the battle to escape a group that is perhaps proving tougher than many had anticipated.

There’s something about Genk which brings Oxlade-Chamberlain to life, it seems. He was the headline act in Belgium a fortnight ago, and the England international was at it again at Anfield, proving the match-winner as Liverpool picked up a Champions League victory on Bonfire Night. Having scored twice in the away fixture, and then adding a screamer in the Carabao Cup here against Arsenal last week, the former Gunner continued his hot streak in front of goal. Will it be enough to play him into contention for a start against Manchester City on Sunday, though? Oxlade-Chamberlain has hurt City before, of course. His long-range strikes in 2018 provided memorable moments in the Premier League and in Europe, and he has hinted in recent weeks that the good times are not far away at all after his serious knee injury. This was another decisive contribution, one which should see Liverpool safely into the knockout stages once more.

He may have netted three brilliant goals in his last two starts for Liverpool coming into this one, but Oxlade-Chamberlain still wanted more. Speaking after scoring another stunner against Arsenal a week ago, the Englishman insisted he still felt some way short of top form in terms of his overall performance. But here, he combined goalscoring exploits with a more rounded showing that proved he is the midfielder most likely to break up Klopp’s current preferred trio before too long. Genk simply couldn’t cope with Oxlade-Chamberlain’s penetrating runs and link-up play all night, and we are soon likely to be saying that about Premier League opposition too.