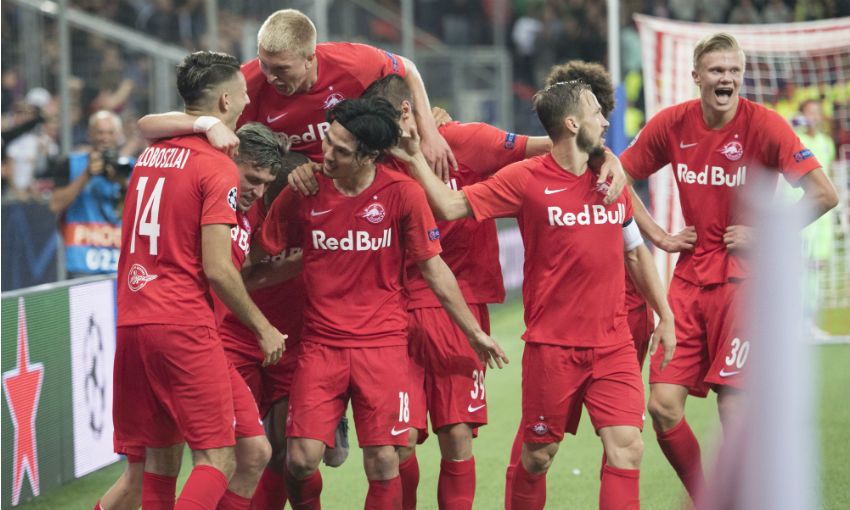 Austria Vienna - 24 times national champions - took the lead with just two minutes played at Stadion Salzburg on Saturday, and almost added to it shortly after.

For anyone of a Liverpool persuasion conducting a spot of research ahead of Wednesday’s Champions League encounter at Anfield, it might have seemed like a precarious situation for a Salzburg side showing eight changes from their midweek win over Rapid Vienna in the Austrian Cup, and entrusting the stewardship of their midfield to 19-year-old debutant Mohamed Camara.

Yet, 90 minutes later, Jesse Marsch’s much-changed side were celebrating a comprehensive 4-1 victory, and a 70th game without defeat in all competitions at Stadion Salzburg.

And that long unbeaten streak at home isn’t the only similarity Die Mozartstädter share with Liverpool.

Just like Jürgen Klopp’s Reds, Salzburg are five points clear at the top of their domestic league after a near-flawless start, winning eight of their nine Austrian Bundesliga fixtures to date and scoring a staggering 40 goals in the process - an average of almost 4.5 per game. 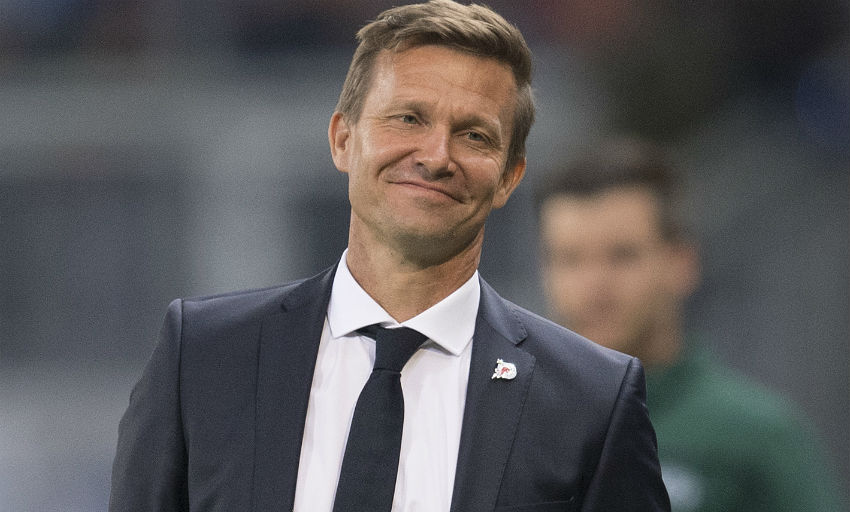 “We are young, we are aggressive, we are dynamic,” Marsch stated after their dazzling 6-2 victory over Genk on Champions League matchday one.

“There has been so much doubt built into the club and the city and the fans, because for 14 years they came just short of making the Champions League. But we have a lot of new players and I’m a new trainer, so we don’t all have that in-built disappointment and we’re excited to go after it.

“The difficultly of playing against Liverpool is that all of the things we are good at, they are better than us at! It makes the match-up incredibly difficult, so our strategy will be very important.”

The only blemish on Salzburg’s record this term is a 2-2 draw away to LASK, but on closer inspection that was as key a match as any when it comes to assessing the threat the 13-time Austrian champions pose.

Five days on from the Genk victory, and with influential attackers Erling Haaland and Takumi Minamino both benched, Marsch’s men fought back from 2-0 down and snatched a 90th-minute equaliser, both goals coming from the man deputising for Haaland, 20-year-old Zambian Patson Daka.

A demonstration of Salzburg’s strength in depth, mental fortitude and fierce aversion to losing, it was grist to the mill of those who believe Group E may not necessarily follow the script that critical consensus dictates.

“LASK are a very good side, they were runners-up in the Austrian Bundesliga last season,” explains Christian Hackl, a sportswriter for Vienna-based newspaper Der Standard.

“Jesse Marsch made eight changes from the game against Genk, so to take a point after being 2-0 down against a team like LASK was a very good result. I think Liverpool are definitely the favourites, but the people have hope; this is a really good Salzburg team, with confidence and a very strong mentality.”

No individual player in Europe attracted as much attention on matchday one as the Norwegian wunderkind Haaland, who hit a remarkable 17 goals in his first 10 appearances this season.

But the dismantling of Genk was about more than the 19-year-old striker’s hat-trick; just as well given he is reportedly a doubt to feature at Anfield after missing the last two matches through illness.

Marsch’s starting XI against the reigning Belgian champions had an average age of 24, blending teenagers like Haaland and Dominik Szoboszlai with over-30s Andreas Ulmer and Zlatko Junuzovic; a mixture of youth and experience perhaps reminiscent of Ajax on their journey to last season’s Champions League semi-finals. So, who in particular warrants keeping an eye on?

Hackl continues: “They have an amazing scouting system, signing players from Africa and Asia and all over the world, often lending them to [feeder club] FC Liefering and turning them into top players.

“Junozovic is a bit older than the others but a very good player, an Austrian international who played for a very long time with Werder Bremen in Germany. The goalkeeper Cican Stankovic recently made his debut for Austria and they also have a new Danish right-back called Rasmus Kristensen, who arrived from Ajax in the summer.

“As for Szoboszlai, he is only 18 years old but in two years’ time he could be a €50million player.

“And Salzburg don’t just develop players, they develop coaches. Marco Rose was a perfect coach for them, and he’s a good friend of Jürgen Klopp [having played under him at FSV Mainz].

“But then Rose joined Borussia Monchengladbach in the summer, and Marsch, he has the same way and it’s been very good so far. He was at New York Red Bulls, so it’s all one system where these coaches are developed. They all have a similar mentality and a clear concept, it’s about pressing and attacking.” 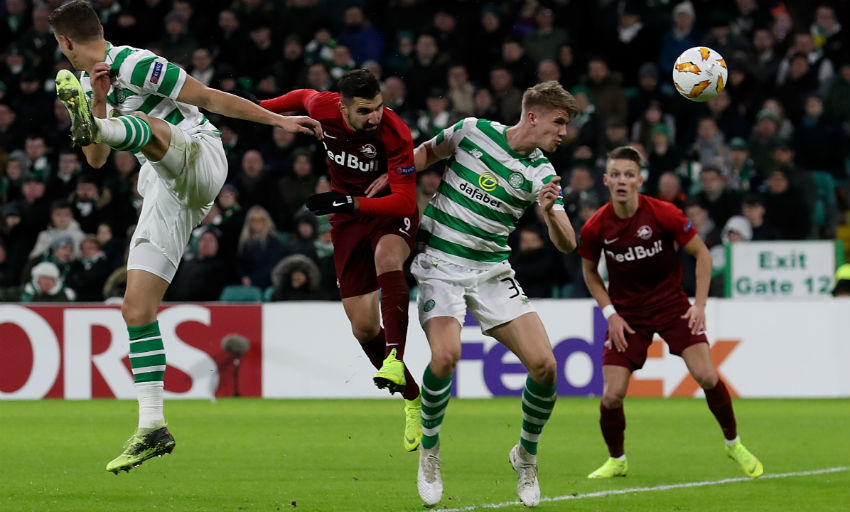 You have to go back to 2010 to find the last time Salzburg faced Premier League opposition in Europe, but Scottish champions Celtic had the misfortune to run into them last season, losing 3-1 in Austria and 2-1 in Glasgow as Rose’s team ploughed their way to six wins out of six in the Europa League group stages.

“I’d say that tempo and pressing with energy were their main traits,” notes Stephen Russell, a tactical analyst and writer for the Celtic fan media website and podcast 90 Minute Cynic.

“The full-backs Ulmer and Stefan Lainer were critical to their game plan, really pushing up high and providing extra options to disrupt the Celtic defence. By pulling Celtic wide, they created lots of situations where they outnumbered the centre-backs three to two.”

Since then, of course, Rose has moved on and taken Lainer with him to Gladbach, with Moanes Dabour - scorer of three of those five goals against Celtic - also featuring on a long list of summer departures.

Indeed, for Sadio Mane and Naby Keita, who both spent two years with the Austrian powerhouse earlier in their careers, the rate of turnover in Salzburg's squad means any sense of a reunion will be dimmed, with only three players still in situ from Mane's 2012-14 stint.

“We all had the thought, ‘It’s the end of Salzburg’ in the summer,” Hackl admits. “But it’s not the end.”

What are the main differences, then, between the Rose regime and that of former USA midfielder Marsch? Lee Wingate is one-third of The Other Bundesliga, an English-language podcast about Austrian football which recently landed an exclusive interview with the American tactician.

“Under Rose, Salzburg would consistently line up in a 4-4-2 formation with a narrow diamond in midfield,” says Wingate. “Under Marsch, they favour a 4-2-2-2 formation, with a double-pivot at the heart of midfield and two wider midfielders further forward supporting the strike partnership.

“The attacking play is similar to Rose’s tenure in that Salzburg look to transition from defence to attack fast and through the middle; the main difference is that they are not averse to playing balls into the box from the wings - as in the Genk game when they scored twice from crosses. The pressing is also different: the wide midfielders join the centre-forwards in pressing the opposing backline, which often creates a four-on-four situation and leads to possession turnovers.

“Unfortunately, their best defensive midfielder - in my opinion - Antoine Bernede suffered a broken shin in the cup against Rapid Vienna and will miss the Liverpool game.” 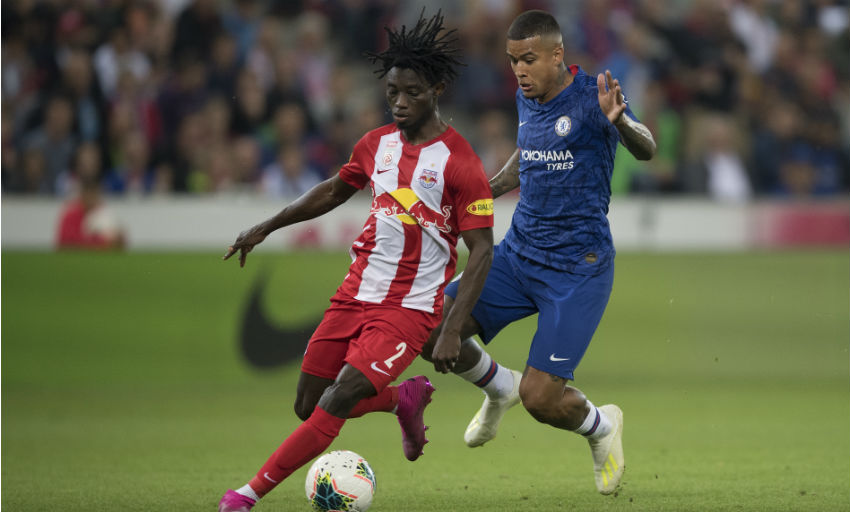 Perhaps the central question tomorrow night is whether Salzburg, who spend so little time defending domestically, have enough nuances to their style to get a result at Anfield, where Liverpool haven’t lost in European competition since October 2014.

“This will be the first game in any competition under Marsch in which Salzburg have been the real underdogs,” Wingate observes.

“Whether it was at home to Genk in the Champions League or away to Rapid Vienna in the Austrian Cup, they have always been strong favourites and have stuck to their approach - seen as attacking by some and gung-ho by others. However, they did organise two pre-season ‘glamour friendlies’ against Chelsea and Real Madrid to prepare them for the Champions League.

“They largely adopted the same approach against Chelsea and were caught out defensively a number of times as they lost 5-3. Against Real Madrid, by whom they were beaten 1-0, they shored up the defence but this came at some cost to their attacking threat.

“Ultimately, it’s impossible to say whether Salzburg will compromise their approach, but Jesse Marsch does not seem like the kind of coach willing to sacrifice his style too much to counteract opposing teams. My prediction is that Salzburg will try to attack Liverpool - but mainly on the counter.”

The away dressing room at Anfield will apparently bear witness to meditation - courtesy of Daka - and a blast of the Eminem song I’m Not Afraid, used by Marsch to motivate his players; the two revealing the specifics of their pre-match prep as part of a behind-the-scenes documentary produced to document Salzburg’s long-awaited Champions League adventure.

The episode covering this week’s events will make for an interesting watch for fans of both clubs, but with hosts and visitors in such equally impressive form, the match itself should provide more than enough entertainment in the meantime.