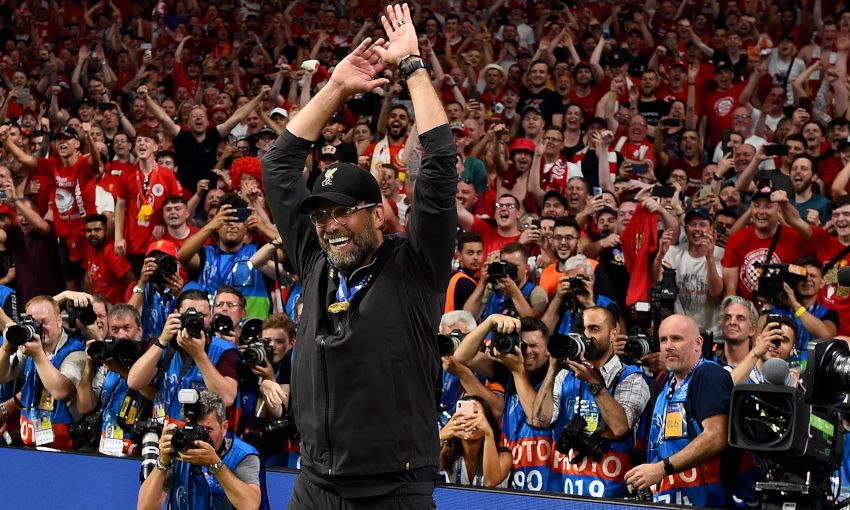 Liverpool were crowned champions of Europe for a sixth time after a 2-0 win over Tottenham Hotspur in Madrid on Saturday night.

Mohamed Salah got the Reds off to a perfect start from the penalty spot and Divock Origi came off the bench to net the second goal to clinch Champions League glory for the Reds.

Doubters to believers to sky-high achievers. Liverpool are Kings of Europe once again after a night of pure ecstasy in Madrid. Just like in Kiev 12 months ago, there were tears, but this time they were of unbridled joy rather than anguish. Welcome to paradise. Ol' Big Ears is coming home to Merseyside for the sixth time. This party has started and it won't be finishing any time soon. Fourteen years after the Miracle of Istanbul, a new glorious chapter in Liverpool's history has been written. The deafening roar that accompanied the sight of captain Jordan Henderson lifting that iconic trophy to the heavens underlined the scale and the significance of the moment. No wonder amidst the wild celebrations they grabbed a beaming Jürgen Klopp and repeatedly tossed him into the air as the delirious travelling Kop paid homage to their manager. He's the man who has made their dreams and those of millions of Kopites across the globe come true. He's the class act who in four short years has transformed Liverpool from also-rans into the most feared side in Europe. This is a special team with an incredible, inspirational leader.

For 86 minutes, this game looked to be a story of Salah and redemption. From crying in Kiev to marksman in Madrid, the Egyptian’s penalty had seemingly guaranteed him the headlines as well as the Champions League trophy. But then Origi came on in a huge game, and every Liverpool supporter in the Wanda Metropolitano probably knew what was coming. In fairness, it could so easily have been any other player taking the spotlight in Madrid. Origi and Salah aren’t the only stories in this Liverpool squad crafted by Klopp, and that is perhaps why there is so much character in this dressing room. Henderson, his name sits alongside Emyln Hughes, Phil Thompson, Graeme Souness and Steven Gerrard thanks to this victory.

On the biggest of stages, Liverpool delivered. Their special season got its special conclusion. After 14 years, the Champions League trophy is heading back to Anfield after Klopp’s side defeated Tottenham 2-0 at Madrid’s wonderful Wanda Metropolitano stadium. For Salah, this was his night of redemption, the one he’d dreamed of for a year. Devastated in Kiev, delirious in Madrid, the Egyptian’s second-minute penalty secured a sixth European Cup crown for the Reds. Origi, the hero of the semi-final, emerged from the bench to finish the job late on. The beaming Belgian was the man for the big occasion, yet again. It was by no means a classic final, but will anyone care? Liverpool are back at the top of the tree. As the famous Kop banner says, ‘Those Scousers Again’. They just can't keep their hands off that famous trophy. They had taken over the Spanish capital. Plaza Mayor, Plaza de Santa Ana and Gran Via were transformed into a red sea, sunburnt and singing. It was some sight, with the Madrid authorities estimating that around 50,000 Liverpudlians had made the journey. If anything, that seemed conservative. They’d come from far and wide, from Chile and Egypt, Croxteth and Crosby. They’d arrived by car and by train, by air and by sea. They had to be there. They’d come to party, to see their heroes crowned.

The sultry heat of the evening, a second minute penalty from Salah and a late strike from substitute Origi delivered a 2-0 victory over Tottenham Hotspur and the joy the supporters craved. It also rid Klopp of the reputation of the man who always loses finals. The victory in the first all-English Champions League Final since 2008 re-established their team as one of Europe's elite and banished the pain of their defeat in the titanic Premier League battle with Manchester City when they won 97 points and still it was not enough. They had not hidden from that pain. They had held it close and embraced it and used it. The match was not a classic. In fact, it was as if both teams had spent all their energy and their taste for drama in their semi-final miracle comebacks against Barcelona and Ajax. This was Liverpool's sixth triumph in the European Cup and Champions League, a record that lifts them above Bayern Munich and Barcelona and behind only AC Milan and Real Madrid in the history of the world's leading club competition. What a tribute it was to a team's ability to bounce back.

The frustration of his losing streak ended, the ache to seal his Liverpool love affair with silver satisfied. It might be three and a half years into his tenure, but this felt like a start as well as some sort of ending - the sealing of a ­marriage. This was far from ­flamboyant, far from thrilling, but its ­significance was luminous. Klopp loves his club’s history, now he is an indelible part of it. There is no chance of Klopp being spirited away from ­Anfield. If we didn’t know ­it ­before, we do now - Liverpool is his spiritual home. This was a reward for nearly four seasons of labour and ­inspiration but it also felt like something else. It felt like the beginning of an era. The losing streak has been snapped, the trophy wait is over, a dynasty has begun.