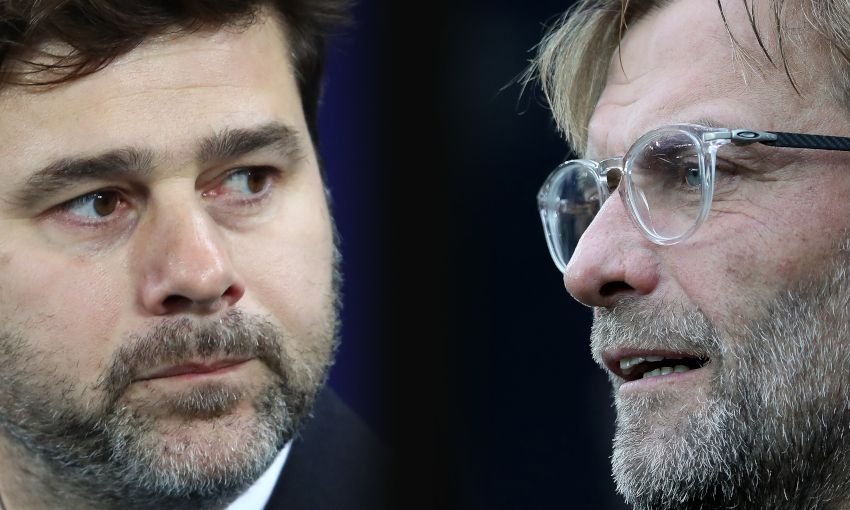 Player whisperers and tactical wizards, Jürgen Klopp and Mauricio Pochettino are cut from the same cloth.

In the upper tier of Melwood, in the short corridor that leads from the manager’s office to the canteen, Klopp – pulling one of his identifiable ‘silly faces’ – is staggered.

It is July 2017, Andy Robertson has become Liverpool’s latest addition and a member of staff, who rattles off the Scotland international’s professional journey, has missed a piece of information on the player that the German deems most important.

“How can you not know that he is going to become a father for the first time?” Klopp scolded. “That’s the biggest thing in his life now. Come on!”

At the turn of this year, the sun cracks over an icy afternoon and peers through the blinds in Pochettino’s base at Hotspur Way.

Animation layers the face of the Tottenham boss as he picks up his phone and he offers a glimpse of the WhatsApp conversation behind his glow.

Harry Kane, on his day off, has shared a picture of himself carrying his daughter, Ivy Jane, on his shoulders as they observe a lion.

Pochettino laughs and reveals the animal is his nickname for the Spurs captain, before switching to philosophical mode.

“You have to also share the moments away from football,” he says.

“If you care about the person, you find out many more things about a player. You have the responsibility to help develop them as people too.”

On Saturday, as two of the world’s foremost managers proudly lead their ‘mentality monsters’ and ‘heroes’ out for the Champions League final in Madrid, divided by the desire to see their side soaked in champagne and confetti, they will know that there is so much more that connects them. 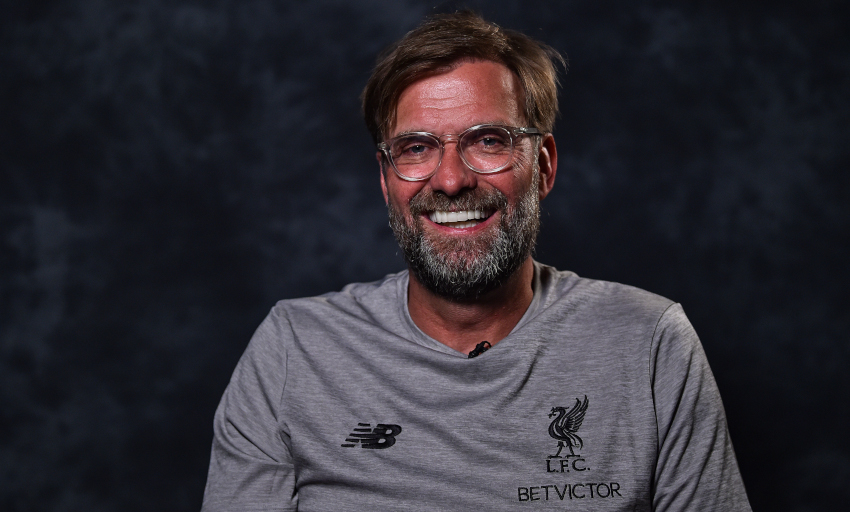 Klopp and Pochettino are both deep divers into those they work with. What a footballer is capable of with the ball or how well a coach can implement a session is easy to ascertain, but what lies underneath the job functionality – their beliefs, their sacrifices, their support structure, their lives beyond training and matchdays – houses the really crucial details.

They subscribe to the notion that you cannot guide or improve anyone if you cannot understand them. They recognise man management has become even more fundamental in the age of wall-to-wall coverage, with social media amplifying the noise.

In an interview with this writer, Klopp used the example of Roberto Firmino to illustrate the point above. “People say he does not score enough.

“What?! He is the best player without scoring with how well he reads the game for the benefit of others.

“Outstanding! But then what if he starts thinking, ‘Oh, I need more goals’ and starts shooting from all over the place when usually, he would play a clever ball and make a run to open up the space?

“There needs to be one plan, one voice, one belief.”

Pochettino agrees with the notion of his message needing to be the loudest, to last the longest. “There are so many distractions these days,” he notes.

“And with the evolution of society, you can’t be left behind: you have to know everything about what could be affecting them, what they spend their time doing, the effects of social media and all these kind of things.”

With their imprint on players and staff so unmistakable – the fortunes of Firmino and Kane under their respective tutelages as just one example – this human-first approach from Klopp and Pochettino has been successful and is a key tenet in the transformation of Liverpool and Tottenham. 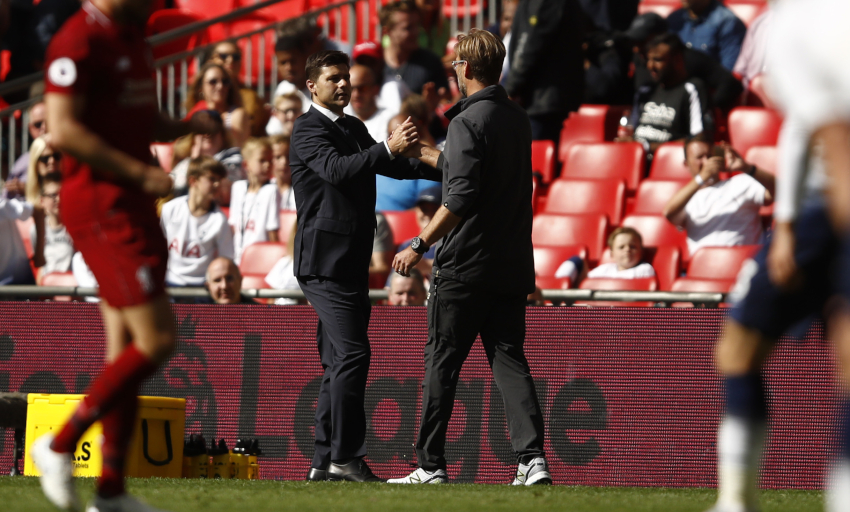 The pair are process managers, whose ideas all serve a long-term vision. Both are often asterisked with the fact they have not yet delivered silverware to the Reds or Spurs – a status that will change for one of them on Saturday – but that undercuts a body of work that has guaranteed gold in football: sustainable success.

Would any Liverpool fan swap this team, this journey, this trajectory for the class of 2012 that last won a trophy – the League Cup? Or would any disciple of the north Londoners want to trade and return to 2008, when Juande Ramos guided them to that same prize?

Bar on-field progression, having Klopp and Pochettino in charge has empowered each club to focus on upgrading their facilities without performance upheaval: the redeveloped Main Stand at Anfield will be followed by a new joint first team and Academy complex in Kirkby, while Spurs’ recently opened stadium has been noted as a benchmark for global ground design.

“When you sit in the main chair like I sit, you have a lot of power, but even more than that, you have all the responsibility,” Klopp has said.

“And responsibility for me means it never ends. You need to create something where you can really be measured by – even after you’ve gone.

“You also have to take the minutes to think and talk about changing the structure to make it more effective.

“Build this, improve that. I’m interested in everything, in the whole club and when I leave at some point, I don’t want people to celebrate me still, I only want that they can still feel the benefit of me being manager here.”

Pochettino and Klopp have been the first to underscore that they are not a one-man show. Collaborative and without ego, they encourage their staff to take ownership, to offer insight and solutions.

“It’s key to have the right people with you, who know you, who accept the role they do next to you, who really enjoy what they do,” Pochettino detailed.

“They need to be able work well within a team, but also grow as individuals. They have to feel important and have the bravery to take decisions and make a mistake.”

While the duo are applauded for their relationship with players and staff, less spotlighted is the other facets of their managerial brilliance.

Klopp is gregarious and can be a fireball of emotion on the touchline, but his ability to exude calm, distilling the most critical bits of information to his squad at half-time, is incredible.

Players praise his knowledge of knowing when and how to handle situations. The 51-year-old doesn’t balloon issues – whether it be a player off form or a small misdemeanour – often tackling matters briefly at the start of training, but with authority.

Pochettino, meanwhile, can recall every session, every conversation, every formation and even the smallest details that happened five years ago as though it occurred yesterday.

He is warm and welcoming, but he is also steely and doesn’t shy away from difficult decisions.

Both possess deep emotional intelligence and are exceptional tacticians: how Klopp has worked to improve Liverpool’s set-pieces and offensive protection this season is one such example, while his counterpart’s ability to change a game from the bench is evident.

For all the charisma that allows them to easily connect with people, they are geeky when it comes to organisation and preparation, poring over what may seem to be insignificant characteristics.

Klopp and Pochettino are driven and relentless: hallmarks of the teams that have been sculptured in their image.

And underpinning their machinery is the desire to advance, to push past boundaries, to win.

Whatever happens in Madrid, there will be no loser in either dugout: both managers are a triumph in an era of short-termism and flux in football.

Melissa Reddy is an ESPN correspondent. Read her exclusive interview with Trent Alexander-Arnold by clicking here.