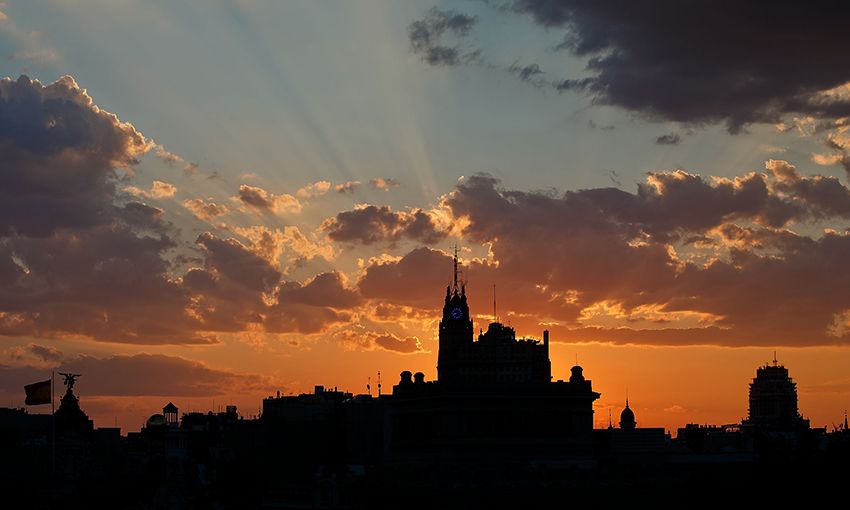 Thousands of travelling Reds will descend on Madrid this weekend as Liverpool take on Tottenham Hotspur in Saturday night's Champions League final at the Estadio Metropolitano - and we've put together this handy guide for the trip to the Spanish capital.

As befits the largest city on the Iberian Peninsula, Madrid is bursting with history, culture and exudes an energising street life that supporters can soak up in a host of vibrant plazas ahead of the 9pm kick-off (local time). 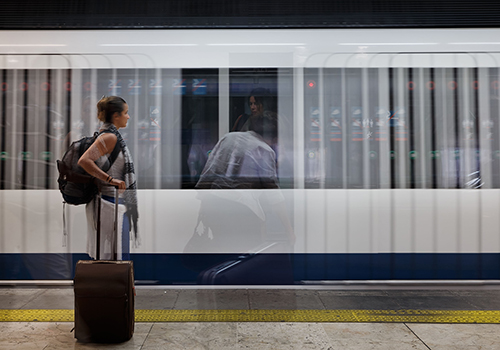 The easiest and quickest way to travel the 12km from Adolfo Suarez Madrid-Barajas Airport to the city is by metro. Line 8 (pink) runs from all terminals to Nuevos Ministerios station in central Madrid and takes about 15 minutes.

From there, you can connect to the rest of the underground network to explore Madrid, or transfer onwards and go directly to the Estadio Metropolitano, on Line 7 (orange).

A single journey from the city to the airport costs around €5. However, a one-day Tourist Pass ticket for Zone A - which includes the airport, city centre and stadium - costs just €8.40 and allows for an unlimited number of trips on the metro and other public transport services in the zone.

Available to cover up to seven days (€35.40), the Tourist Pass can be purchased at the airport and all Metro de Madrid network stations.

The subway system operates daily from 6:05am to 1:30am and a one-day Tourist Pass ticket expires on relevant public night services at 5am. Train, bus and taxi options are also widely available from the airport and throughout the city.

Liverpool fans who have bought Champions League final tickets direct from the club will also receive a travel pass entitling them to free public transport in Madrid.

The fan festival in Shevchenko Park ahead of last season's Champions League final in Kiev, Ukraine, served up a hugely successful pre-match show that was described as a ‘mini-Glastonbury’ by some LFC supporters.

This year’s Fan Park will be located in the Plaza de Felipe II (also known as Salvador Dali square) next to the Goya metro stop, which is served by Line 2 (red) and Line 4 (brown), to the east of the city centre.

The BOSS night lads will once again be involved on the big stage, along with a number of other artists and LFC fan outlets including The Anfield Wrap. With food and drink also on offer, thousands of Reds will undoubtedly make a bee-line for it.

The Fan Park is due to close at 6pm (local time) when supporters with tickets will be expected to start making their way to the stadium in time to go through the exhaustive security checks. 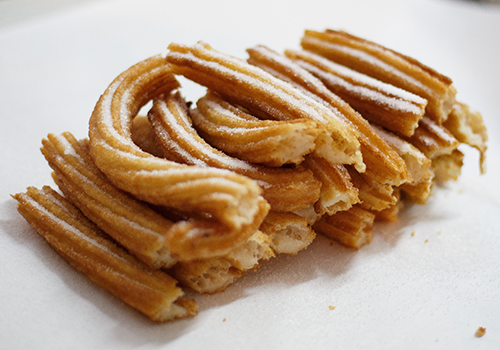 A trip to Madrid would not be complete without a visit to one of the city's many churrerias to breakfast on traditional churro fritters and melted chocolate. The donut-esque fingers are a speciality and the famous Chocolateria San Gines cafe on Pasadizo de San Gines is probably the place to go, having been serving churros y chocolate since 1894.

The nearby Plaza Mayor, a three-minute walk south from Pasadizo de San Gines and home of the iconic equestrian statue of Philip III and selfie-hotspot Casa de la Panaderia, is a great place to relax with a beer in one of the many bars and restaurants. It's also one of the best spots in town to try one of Madrid's other speciality dishes - bocadillo de calamares.

Essentially a calamari sandwich, the beloved snack consists of a bread roll filled with squid rings coated in flour and freshly fried in olive oil. Made to order and served all day, a bocadillo de calamares costs about €3.50. Madrilenians often wash it down with a cana, or small beer, which are served in shorter measures to avoid them going warm in the summer temperatures that are often over 30 degrees celcius.

Then, of course, there is the tapas. Mercado San Miguel, just around the corner from Plaza Mayor in Plaza de San Miguel, is the oldest food market in the city and prides itself on offering the best small plates from every corner of Spain in its stalls, bars and cafes. 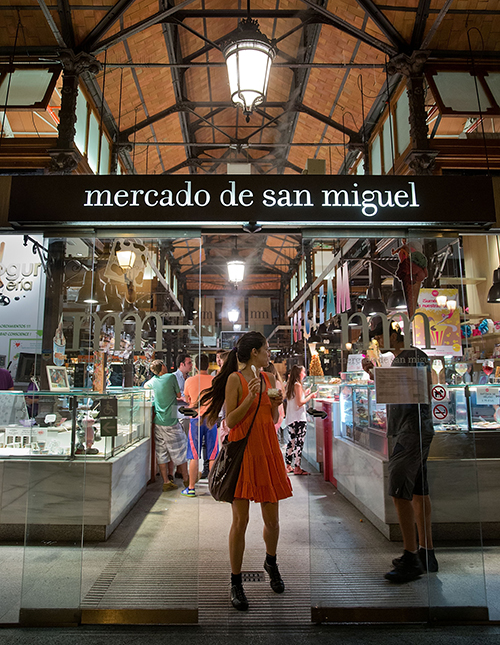 Each Spanish region tends to have its own speciality tapas and in Madrid huevos rotos is one of the most popular. Translated as 'broken eggs', the dish consists of a lightly-fried egg served on potatoes with Iberian ham or chorizo and it's down to the customer to cut the egg and let the yolk ooze over the accompaniments.

The pulpo, or octopus, is also a traditional dish in the Madrid market.

For refreshment, another cana would certainly fit the vibe of the market, or why not try tinto de verano, which is Madrid's variation of sangria, or a large gin and tonic that is the go-to drink for Madrilenians in the evening.

Wherever you are in the city, keep an eye out for Menu del Dia (menu of the day) deals in local restaurants offering a three-course set lunch, ranging from €10 to €15, as an economical way to set yourself up for the day.

Depending on the result of the match, Puerto del Sol, the large public square serviced by the Sol metro station, could well be the place to head for post-match celebrations as it's surrounded by bars and is traditionally the spot where visiting fans go to party.

Calle de la Cava Baja - a lively, atmospheric street in the La Latina district - is also a great spot for bars and cafes. 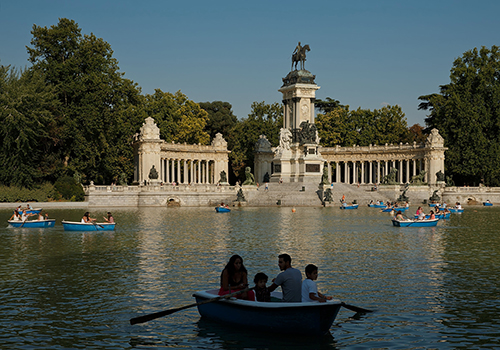 Madrid is the third-largest city in the European Union - behind only London and Berlin - and offers plenty to explore. But for those with limited time in the Spanish capital, we've put together a one-day, whistle-stop walking tour of some of the key sights.

After a breakfast of churros y chocolate, why not take a stroll through the leafy environs of Retiro Park? It's just a 20-minute walk to the east of Madrid's vibrant main square Plaza Mayor, or a 10-minute walk south-west from the LFC Fan Park.

A green oasis in the heart of the city, the 125-hectare park boasts popular attractions such as the Glass Palace, the fountain of the Fallen Angel and the Estanque grande del Retiro lake where you can hire a boat or sunbathe on the shore.

On the eastern bank of the man-made pond is the towering Monument to Alfonso XII - standing at 30 metres tall - with an observation deck on the statue’s plinth that offers stunning vistas of the city you're exploring.

Exit the park in the west through the Puerta Felipe IV gate and head towards Madrid's Golden Triangle of Art, home to a trio of world-famous museums: the Prado, Reina Sofía and Thyssen-Bornemisza. 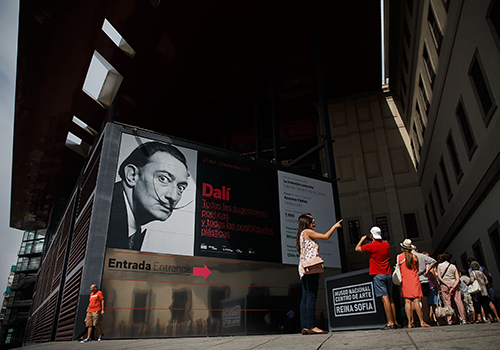 There is a Paseo del Arte (art walk) that connects all three, but on this whistle-stop tour we’re going to head straight to the Prado, maybe stopping on the 10-minute meander from the Puerta Felipe IV gate to grab some refreshments. Murillo Cafe on Calle Ruiz de Alarcon is a popular choice and is an alternative place to indulge in some of the huevos rotos and cana mentioned in the section above.

El Prado is considered to be one of the greatest art museums in the world - housing numerous works from Francisco Goya, Diego Velazquez, Hieronymus Bosch and much more - so even if art is not something usually on your agenda, it is well worth a visit while in Madrid - and it’s free entry too.

After exiting the Prado, take a 10-minute stroll north to the Circular de Bellas Artes building, on Calle de Alcala, where the topmost floor has been converted into one of the best rooftop bars in Madrid, offering great views out from the centre of the city towards the Guadarrama mountains beyond.

Hosted atop an art gallery (Madrid is famous for its art in case you haven't guessed) a small €4 fee will grant you access to the roof, where you can sip drinks on the terrace in the Spanish sunshine and take in all the bustling city has to offer. 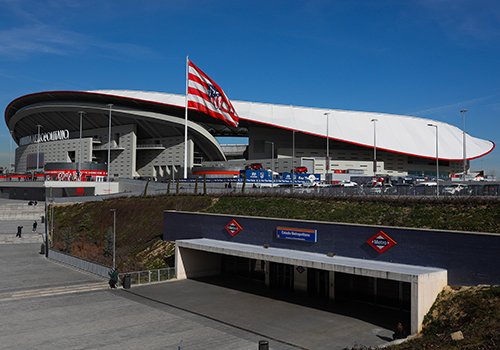 The 68,000-capacity Estadio Metropolitano was officially opened in September 2017 and replaced the Estadio Vicente Calderon as the new home of Atletico Madrid.

Located approximately 10km to the north-east of the city, in the Rosas barrio of Madrid, it is bordered by the M-40 motorway on one side and apartment blocks on the other, meaning the best selection of bars and restaurants are back in the centre - a short metro journey away.

The stadium is served directly by the Estadio Metropolitano station on Line 7 (orange) of the subway system, and can be easily accessed from downtown.

Reds supporters coming from the Liverpool Fan Park at Plaza de Felipe II can board Line 4 (brown) at Goya station and transfer to Line 7 at Avenida de America to get to the Metropolitano, or alternatively take Line 2 (red) direct from Goya station to Las Rosas station and make the 20-minute walk to the ground.

Liverpool fans have been allocated the south end, or fondo sur, of the stadium and are advised to enter the Metropolitano through Gate 3.

The outer perimeter of the stadium opens at 4pm (local time) and entry to the stadium itself will be from 6pm (local time). Expect access to the ground to be slow as there will be a series of ticket checks at various checkpoints, plus body searches before and after getting through the turnstiles.