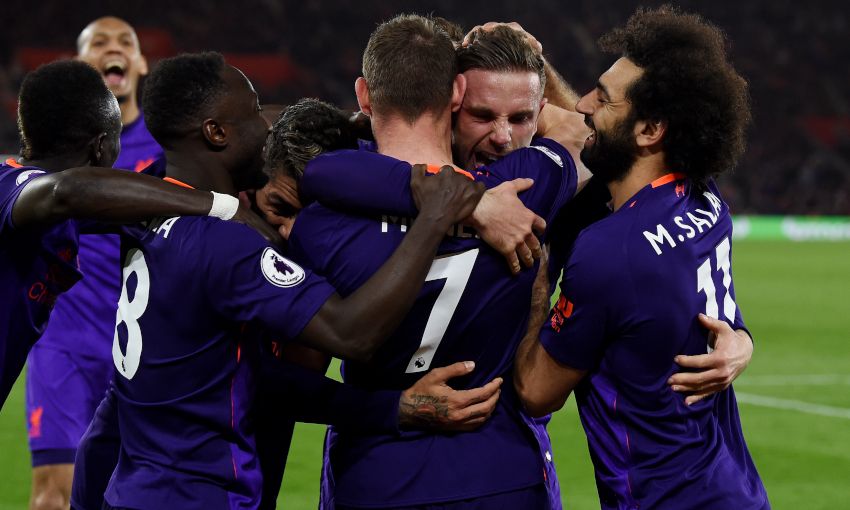 Liverpool came back from a goal down to beat Southampton 3-1 at St Mary's on Friday.

After Shane Long had fired the Saints into a lead, Naby Keita then levelled with his first goal for the club.

Mohamed Salah then netted his 50th Premier League goal for the Redsto make it 2-1 before Jordan Henderson made certain of the victory.

Cometh the hour, cometh the man. With the clock ticking and Liverpool in desperate need of inspiration on the south coast, their Egyptian King stepped up and delivered. The longest drought of  Salah's Reds career was ended in sensational fashion as he ran half the length of St Mary's to write another unforgettable chapter in this thrilling title challenge. What a way for Salah to enter the record books as the fastest player in the club's history to reach a half century of league goals for the Reds. His stunning individual effort – his first goal in nine appearances - triggered wild celebrations in front of the jubilant travelling Kop. “Liverpool, top of the league,” they roared as Manchester City were knocked off the summit. Once again Jürgen Klopp's side found a way to win when operating nowhere near their best. Once again there was late drama as they showcased their powers of recovery to turn a potentially devastating stalemate into a priceless victory. The bottle of this team Klopp has assembled is staggering. As the stakes keep getting higher, the size of the cojones on display are immense. There's a powerful sense of unity, spirit and belief – coupled with an abundance of quality - which is powering them towards the finish line. Whether it's enough to secure the Holy Grail only time will tell. Relying on City to slip up, Liverpool aren't masters of their own destiny. It's a mark of just how far Liverpool have come under Klopp that Champions League qualification for a third successive season will barely get a mention. All eyes are on the big prize and their 82-point haul with five matches to go is remarkable. Only twice in the Premier League era have they ever surpassed that tally. This is a truly special team.

Pity those who don’t love football. You can keep your Netflix thrillers. Forget your skydiving and your rock-climbing. Don’t bother with bungee jumping or white-water rafting. No, for sheer, unfiltered drama. For seat-of-your-pants terror and torment and the moments you’ll never forget, come to the Premier League, come to the title race. Come to watch Liverpool, the game’s ultimate thrill-seekers. There won’t be a fingernail left on Merseyside if this continues. The Premier League title race is still alive, but once more the Reds had to drag themselves away from the edge of the cliff to keep it that way. As the stakes rise, Klopp’s side simply refuse to take the easy route. Heroes emerged, some familiar, some unlikely. It's a squad game, Klopp says, and he was proven right here. Keita chose the best possible time to score his first goal for the club, equalising before half-time. "A fantastic moment," said Klopp. And then, as the time ebbed away and the stress levels rose, Salah found the goal which sparked incredible, unforgettable scenes in the away end.

Eight long games Liverpool fans have waited to see Salah’s trademark open-armed celebration - boy was it worth it. Fans in the away end could have been forgiven for urging the Egyptian to pass to the arriving Roberto Firmino as he streaked toward goal, but there was never any chance of that happening. Liverpool’s No.11 certainly didn’t look to be carrying any mental burden as he picked out the far side of Angus Gunn’s net with a finish reminiscent of so many of his efforts last season. And you could see how much it meant to him as he whipped his shirt off in front of the celebrating Reds fans in the immediate aftermath. If that is the start of a big period for Salah, he could not have timed it any better. If City somehow don’t crack under this pressure, they will deserve the quadruple trophy victory it will likely bring about. If it is Liverpool lifting the league championship in May, this relentless run of wins will have much to do with it.

How much more drama can this title race take? How much more tension can Liverpool put themselves through, and still keep mastering it? How much more can Manchester City watch on before they break under the endless pressure of it? This is a series in which every episode is a thriller, none more so than Liverpool’s 3-1 win at Southampton. No game could ever be as draining as their win over Spurs last Sunday but this was close. It was yet another late win, this time Mohamed Salah making the difference, running 50 yards on the break, with 10 minutes left. One of the greatest moments yet in this unforgettable season, and one that showed that however Liverpool are playing, it does not especially matter much anymore. All the matters is getting over the line. They only have to do this five more times and then Manchester City will have to be immaculate on their far longer, harder run-in if they are to defend their title.