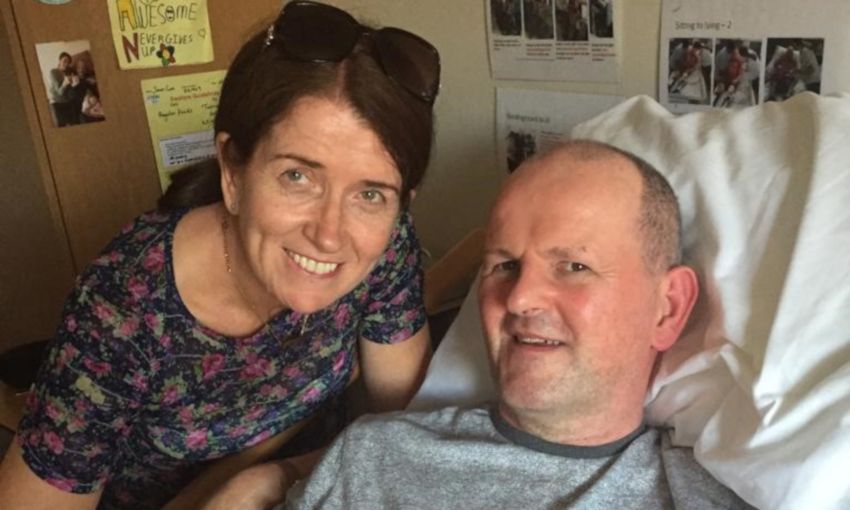 Seán Cox begins the next stage of his rehabilitation journey this week.

The Liverpool supporter suffered serious injuries after an unprovoked attack ahead of the Champions League semi-final match against AS Roma at Anfield in April 2018.

After almost 18 months of treatment in Ireland, Seán will now move to a specialist neurological facility in the north of England for an initial twelve-week rehabilitation programme focused on developing his speech and movement.

“Seán has made progress over the past 18 months but it is extremely slow,” said Seán’s wife, Martina Cox.

“He finds it very difficult to express himself verbally and, while it seems he can hear and understand more, his speech remains very challenged. It is unlikely that he ever will walk again, which is difficult to accept for someone as active as Seán used to be.

“On the positive side, he remains an avid sports fan and is always in a great mood when watching Dublin GAA or Liverpool on the television.

“We are about to start a renovation of our house in Dunboyne which will hopefully be finished by Christmas, making it wheelchair accessible and installing specialist equipment which will mean Seán can spend time in the family home rather than continually being in a hospital environment.

“Being able to bring Seán to England for rehabilitation and, in time, having him spend more time in our adapted home is all privately funded and has been made possible by the generosity of so many people and organisations who took Seán into their hearts. The Cox family remain hugely grateful on Seán’s behalf for the ongoing show of support.”

This October, while in the UK, Seán and his family will make an emotional return to Anfield to watch his beloved Reds play, attending the game as a guest of LFC CEO Peter Moore.

As part of the SupportSeán campaign, comedian John Bishop, a lifelong Liverpool fan, will host a show in January 2020 at the Three Arena in Dublin in order to raise much-needed funds for Seán’s future care.