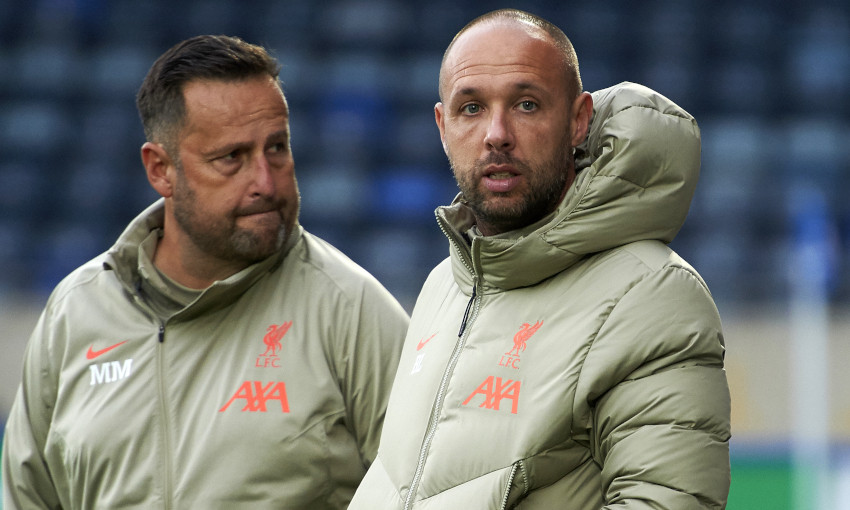 Liverpool U23s endured a disappointing afternoon as they were beaten 3-0 by Manchester United in Premier League 2 on Saturday.

The hosts scored two first-half goals and a third after the break to decide a game in which the Reds finished with 10 men after the late dismissal of substitute Dominic Corness at Leigh Sports Village.

United worked a goalkeeper first in the contest, Shola Shoretire finding space in the box to meet a Charlie Wellens cross but his volley lacked the power to trouble Liam Hughes in the Liverpool goal.

The visitors found some rhythm and when Mateusz Musialowski burst into the box, it took a good block to keep out a shot from Jack Bearne, and Tyler Morton then blasted the follow-up just over.

Anthony Elanga managed to round Hughes when he latched on to a United through ball but his touch took him wide and he couldn’t find a teammate with the cutback.

Shoretire was looking lively for the home side and, after a one-two with Elanga, his shot was turned round the post by Hughes.

It was only a temporary reprieve, though, as the subsequent corner wasn’t cleared and Bjorn Hardley bundled the ball over the line from a right-wing cross to give United the lead on 21 minutes.

Full-backs Owen Beck and Conor Bradley were providing the Reds’ best attacking options out wide but they were struggling to create clear opportunities, with 35-year-old Paul McShane marshalling the home defence well.

United finished the half on top, with several chances to stretch their advantage. Elanga curled a left-foot shot against the post and a few minutes later Zidane Iqbal drifted past a couple of defenders only to put his shot wide.

The second did arrive on the stroke of half-time, Elanga firing a free-kick across goal from a narrow angle that missed everyone before ending up in the net.

Liverpool started the second half much better, a Bearne effort just lacking power before James Norris’ corner flashed dangerously all the way across goal.

But the momentum didn’t last and Hughes was needed to turn Shoretire’s low drive around the post before Hardley headed the corner into the ground and wide.

United’s third arrived on 62 minutes, Shoretire finishing low into the net when the Reds failed to clear their lines.

Barry Lewtas’ charges tried to respond but Musialowski sliced off target after good work on the right by Bradley and Max Woltman.

Musialowski worked another good opening inside the box a few minutes later and his shot was gathered low to his right by Matej Kovar.

Bradley curled a great ball across the six-yard box without finding a taker, before Norris shot too close to Kovar as Liverpool tried to find a way back into the match.

There was a positive for Lewtas as Jarell Quansah came on from the bench for the final few minutes after overcoming an injury in pre-season.

However, the Reds’ frustrating day was compounded when fellow substitute Corness was shown a straight red card with five minutes left for a sliding challenge where he won the ball but the referee penalised his follow-through.