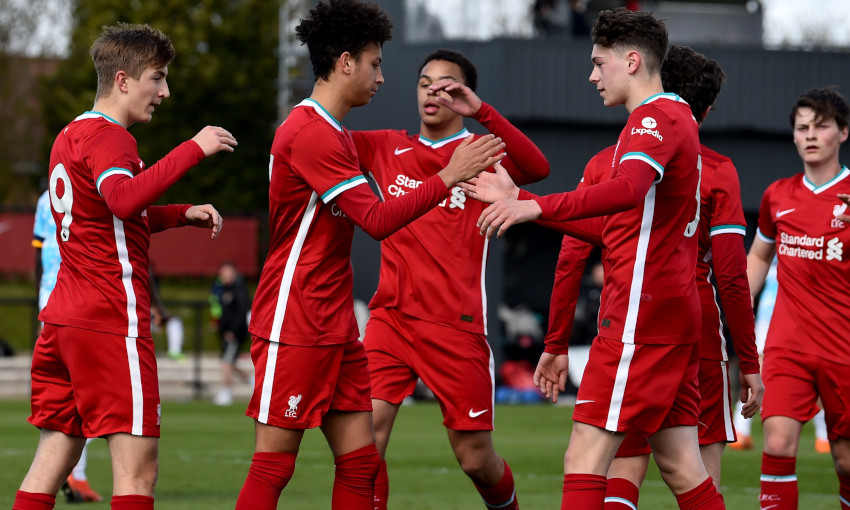 Liverpool U18s produced a sparkling warm-up for their FA Youth Cup date at Anfield next week with an impressive 6-0 defeat of Middlesbrough on Saturday.

Doubles from Max Woltman and Mateusz Musialowski followed goals by Jarell Quansah and Kaide Gordon to deliver a deserved win in the U18 Premier League for Marc Bridge-Wilkinson’s side.

Having netted just once during a first half that should have yielded more goals, the young Reds were prolific after the break to make their dominance pay in the Kirkby sunshine.

A strong first period brought a succession of good chances but a combination of last-ditch defending and profligate finishing kept the visitors in the game.

Liverpool thought they had the lead within five minutes when James Norris exchanged passes down the left and pulled it back for Woltman to clip home, but the flag was up for offside.

Quansah headed over from Musialowski’s pinpoint corner – a good sighter, it would prove – before Melkamu Frauendorf rattled the underside of the crossbar from James Balagizi’s clever pass.

A good team move then ended with Musialowski curling just over, with the contest all one-way traffic in the opening minutes.

The Reds’ breakthrough arrived on the quarter-hour mark, Quansah finding his range and heading home from another excellent Musialowski corner.

Woltman hit the side-netting after being released by Balagizi, and a superb Norris cutback left Musialowski in space in the box but his shot was blocked by a saving challenge, as the hosts tried to build on the lead.

Home goalkeeper Harvey Davies was called into action on 25 minutes. A poor back-pass almost offered Middlesbrough a lifeline, though Davies stood up well to deny Pharrell Willis from a narrow angle.

Frauendorf and Norris were combining well on the left and the former’s latest excursion to the byline saw his well-flighted cross met by Woltman’s head – but a defender managed to get his body in the way.

Woltman dragged a shot wide after Sean Wilson had met a perfect diagonal in stride out on the right, and Quansah almost delivered a carbon-copy of his opener yet this time an opponent found a block.

Liverpool claimed the second goal their football merited three minutes into the second half, with another header extending the lead.

Norris made another clever run down the left and his cross found Gordon, who nodded into the net via a slight deflection for a fifth goal in his last three games.

The result was then effectively secured within 10 minutes of the restart, when Frauendorf was clipped in the box by Jack Stott. Woltman sent Max Metcalfe the wrong way from the penalty spot for his 11th goal of the season and a very comfortable 3-0 advantage.

Musialowski was rarely far from the action and he bagged a deserved goal just after the hour mark. The tricky forward picked up a short pass from Gordon, feinted inside and drilled a fine effort into the corner of the net with his left foot.

Gordon was denied a second by a big defensive block, while a rare opportunity for Middlesbrough was snuffed out by an excellent tackle from Wilson.

Instead, the Reds struck twice more in the closing stages.

Woltman showed great feet in the box to grab his second 10 minutes from time after fine work from Gordon and Frauendorf in the build-up.

Substitute Luke Chambers almost assisted Gordon but the latter’s shot was tipped over and, at the other end, Ben Beals should have grabbed a consolation for the visitors with a powerful header just wide from a corner.

Liverpool had not finished, though, and with three minutes left Musialowski hammered in his second and the Reds’ sixth with his left foot after an assist from Norris.

Next up for the U18s is an FA Youth Cup quarter-final against Arsenal at Anfield on Friday night.