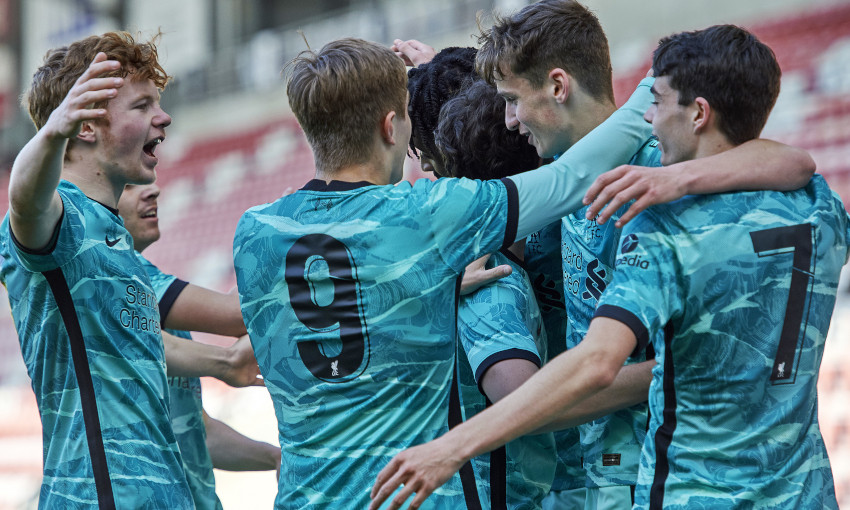 Tyler Morton’s 16th-minute header, smartly glanced over the goalkeeper, separated the sides during an entertaining first half and, ultimately, proved enough for victory.

Marc Bridge-Wilkinson’s team had to see out the final quarter of the contest with 10 players after James Norris was shown a straight red card.

But they held firm to keep United at bay, preserving a slender advantage that sets up a fifth-round trip to Leicester City later this month. 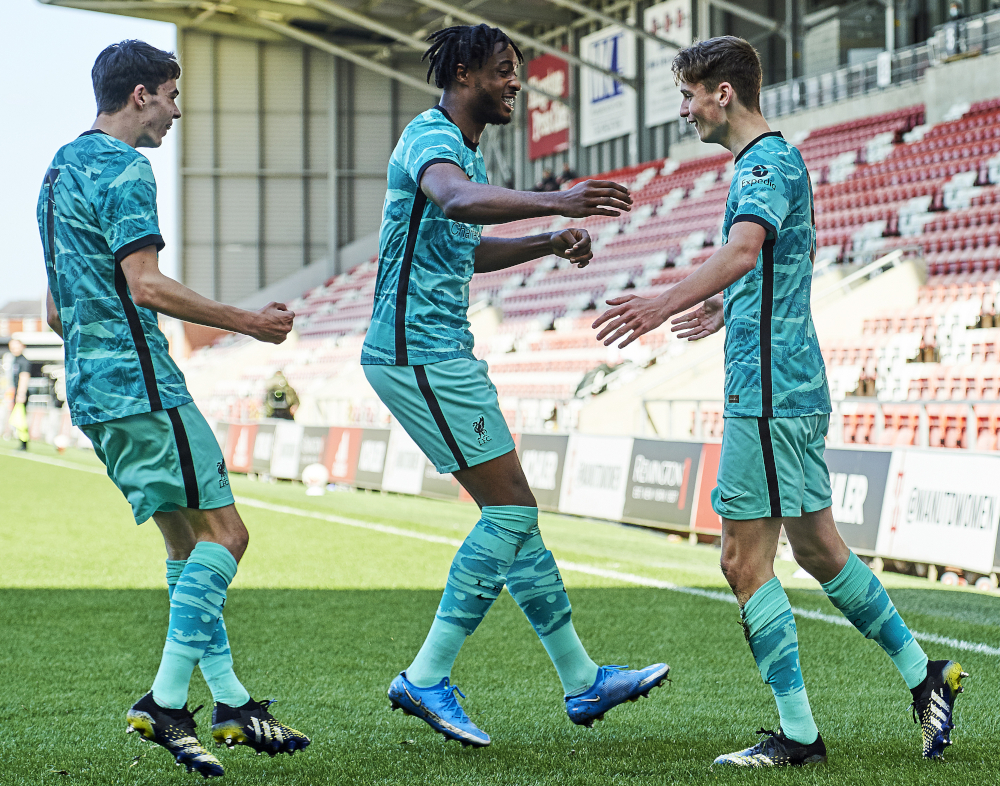 The hosts made the brisker start at Leigh Sports Village and their tactic of dispatching early through balls in behind showed its potential in the fifth minute.

Charlie McNeill broke clear and nudged his finish into the Liverpool net, but the offside flag had already been raised to deny any celebrations.

Next, the Reds gifted possession to Hannibal Mejbri just outside the box and he deftly opened up space in the middle for a blast that was vitally blocked by the conscientious Billy Koumetio.

The quarter-hour mark brought Liverpool’s first chance of the tie, Mateusz Musialowski carrying the ball in from the left channel with intent and firing away an effort that was repelled by United goalkeeper Radek Vitek.

But the respite lasted barely a minute as a lovely move yielded a breakthrough for the visitors.

They patiently moved possession from right to left and Norris then weighted a perfect cross into the area, where Morton arrived on time to flick a header over Vitek and in. 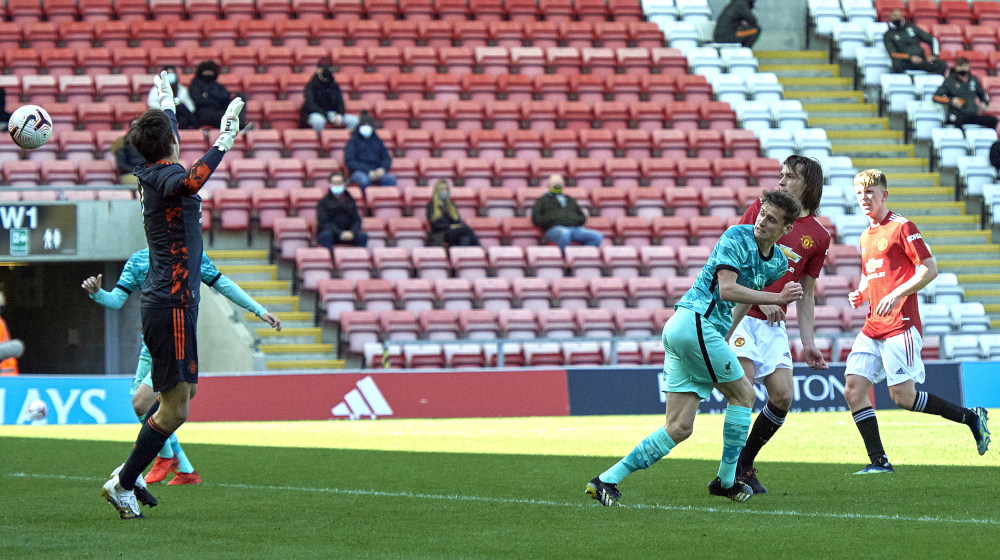 Dominic Corness was not too far away from providing a second goal when his 20-yarder flashed wide of the left post, while Hannibal saw a strike from similar distance deflect just off target at the other end.

Chances kept coming and Koumetio sent a back-post header over the crossbar from Morton’s free-kick delivery, before McNeill directed a low shot straight at Harvey Davies when United found him in space in the box.

The home side began the second half as they had the first, though now with both longer spells of possession and more genuine opportunities to score.

On 51 minutes, Alvaro Fernandez’s close-range shot was cleared off the goalline by the alert Conor Bradley after a slick passing move in the box cut through Liverpool’s defence.

Soon after, Davies had to stand up strong and block at the near post when Hannibal dribbled along the byline and tried to squeeze a finish home. 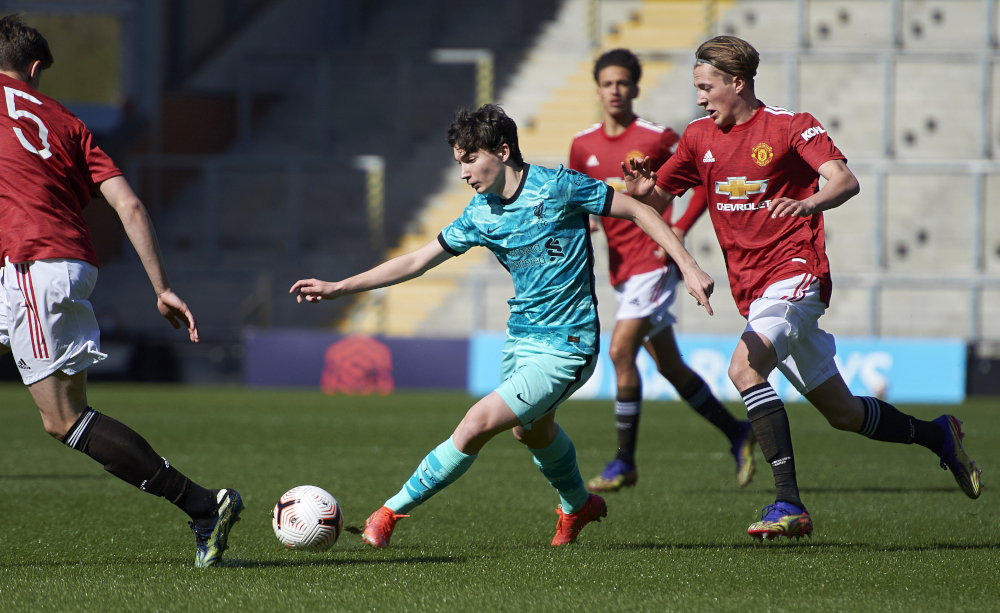 There was no let-up in the United pressure as the clock ticked on – and the Reds’ challenge grew midway through the half when Norris was dismissed.

The left-back’s sliding challenge on Marc Jurado as he tried to win the ball at the halfway line prompted an immediate red card from the referee.

Bridge-Wilkinson introduced Luke Chambers from the bench, in place of Max Woltman, as he re-organised defensively with Liverpool stifling waves of attacks.

Hannibal swept a set-piece the wrong side of the left post from around 25 yards, but the defiant Reds survived much of the remainder unscathed to reach round five in the FA Youth Cup.