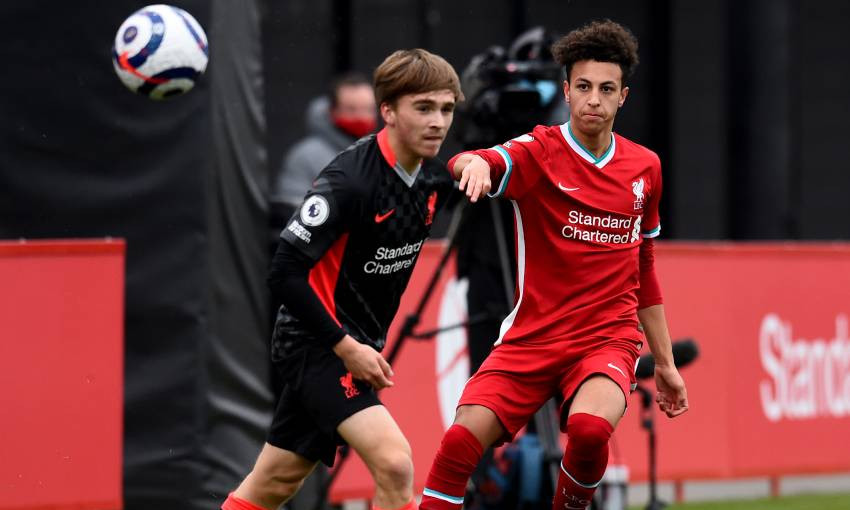 Marc Bridge-Wilkinson received many favourable comments after a large number of his U18s squad trained with the first team at the AXA Training Centre during the international break.

Having been selected by Alex Inglethorpe and Vitor Matos, 12 players from Liverpool’s youth set-up took part in training sessions with a handful of the Reds’ senior contingent before playing in an 11v11 game under the watchful eyes of Jürgen Klopp.

After garnering a taste of what it’s like training with the seniors, Bridge-Wilkinson has told his players to maintain their high standards and keep improving if they want that opportunity on a regular basis in the future.

“The feedback has all been really positive,” the U18s boss told Liverpoolfc.com. “There was a big group of boys who all went and trained with the first team and played an in-house game.

“The feedback that we’ve had so far on each of the boys has been really positive, so they know what it’s like, they know where they want to go and they know this is the next step.

“It’s really important they come back and focus and work hard again – and, to be fair, they have all been really good.

“The message we gave to the boys at the start of the season was: you just don’t know who is going to pop their head out and watch you. They might be looking out of the window, they might stand on the balcony or might wander and watch a session.

“They are now in an environment where the manager and his coaching staff can just wander over and if you are performing well at that moment, then that’s how you make an impression.

“It’s all about making the right impression at the right time.”

🎩 @BenWoodburn with a hat-trick! 🎥 All the goals from the Reds going head-to-head in the internal friendly... https://t.co/tvps9PlUYj

Kick-off is set for 3pm BST and viewers in the UK and Republic of Ireland can watch the game live on LFCTV and LFCTV GO.

On assessing the season so far…

Obviously it’s been strange with all the COVID restrictions, the fixtures and the season starting a little bit later than normal. But in terms of on the pitch, training has gone well and the boys have taken on board all the stuff that we’ve worked on with them individually and collectively. When we come to the fixtures and the games, on the whole we’ve done really well. We’ve got a group of players who are willing to work really hard without the football and with the ball. We’ve also got a group who can score goals and create chances. So when you have players in your squad who are capable of doing that, I think it’s the right way to play. So I’d like to think that is evident when people see the games.

On his own identity as a coach…

I would like to think my identity as a coach has been straightforward, as my job is to help the individuals and help the group. We want to win football games and we want the boys to go out and succeed. But ultimately my focus is that we are helping each boy to develop firstly into the human being they are capable of being, of course, but also capable of developing into the footballer they are capable of as well. 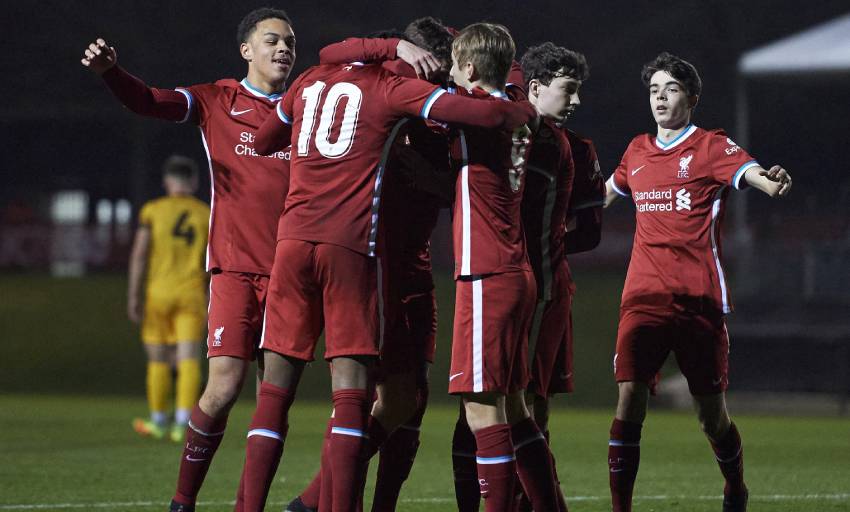 It’s the only real trophy the boys are competing in, in terms of a cup competition. There’s no UEFA Youth League, so this is the only competition where we get to have a go against some of the best teams in the country. It does hold importance and we want to do well against Manchester United on Saturday and hopefully we can continue that run into the next round.

They are good teams but I wouldn’t say our performances have been poor in those games, I think we’ve actually performed quite well. We could have done a bit better in certain areas of the game but I think that if we are looking at ourselves playing against those teams, some of the strongest in the country, we put ourselves in that category. So I’d like to think we go into this game on Saturday with no fear. We know we are capable of winning the game and we’ve got players who can perform on the day. What we want to see between now and the end of the season, I’d like to see some outstanding moments from boys individually and I’d like to think as a team we’ll perform and we’ll continue to show people what we are capable of. Fingers crossed we can get a good cup run.